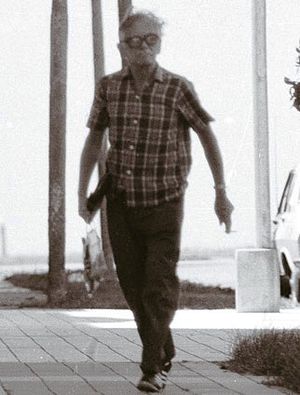 Walter Kutschmann (24 July 1914 – 30 August 1986) was a German SS-Untersturmführer and Gestapo officer, a member of an Einsatzkommando, based first in Lwów, Poland (today Lviv, Ukraine), and later in Drohobycz. He was culpable for the massacre of 1,500 Polish Jews in Lwów, Poland in the years 1941–42.

Walter Kutschmann was born in Dresden in 1914, the son of a dentist. In 1928, he joined the Hitler Youth. In 1932, he enlisted in the Luftwaffe, in which he served until 1936. He began to study law, but left this career path to join the Condor Legion, loyal to the forces of Francisco Franco in Spain, participating in the Spanish Civil War. There he was later the third secretary of the German Consulate in Cádiz. Kutschmann was a relative latecomer to the Nazi Party (membership number 7,475,729) and the SS (membership number 404,651).[1]

At the start of the Second World War, he moved to Leipzig, where he joined the SiPo (Security Police) forces commanded by Karl Eberhard Schöngarth. He was promoted to SS-Untersturmführer and was the commanding officer of an Einsatzgruppe that operated in Drohobycz, Poland. Under his leadership, Kutschmann participated in the massacre of Lwów professors in 1941.[2] In 1942, he ordered the murder of 1,500 Polish intellectuals in the Lwów region, in Brzeziny and Podhajce in what is now part of Ukraine.[3] Witnesses said that the Ukrainians who were ordered to dig the graves for the killings were themselves later slain on Kutschmann's orders. Witnesses also claim that Kutschmann shot a 17 or 18-year-old Jewish housemaid in Drohobycz in 1941, after he accused her of having transmitted a venereal disease to him.[4] In 1944, on the orders of intelligence officer Hans Günther von Dincklage, he was transferred to Paris, where he was briefly associated with Coco Chanel during Operation Modellhut. While in France at the end of 1944, Kutschmann defected to seek refuge in Vigo, Spain under the guise of a Carmelite monk named Pedro Ricardo Olmo Andrés, residing in Vigo.

When the French government began to investigate Nazi fugitives in 1947, he sought protection in the ODESSA network and traveled by sea on the motorboat Monte Amboto, under the guise of a Catholic monk, arriving in Argentina on 16 January 1948. He was assimilated as part of the management of Osram, a lighting manufacturer, where he served as purchasing manager. There in August 1973, he married Geralda Baeumler, a citizen of German origin, a businesswoman and a veterinarian. They settled in the resort town of Miramar, Buenos Aires Province.[5]

Kutschmann lived there until January 1975, when he was found and exposed by journalist Alfredo Serra.[1] Renowned Nazi hunter Simon Wiesenthal in Vienna arranged the extradition of Kutschmann. In 1975, after checking Kutschmann's citizenship and marriage, which proved false, Interpol requested his arrest. The Argentine government attempted to arrest him, but he escaped, thus losing his trail. In 1975, his Argentine citizenship was revoked. A second extradition request was made in 1985, and he was again arrested by Interpol agents in the town of Vicente López. Given his precarious health, he was kept in a hospital prison in Buenos Aires, where he died of a heart attack before he could be extradited.[1] His supposed wife was reported to the authorities for animal abuse, specifically for euthanizing homeless dogs in gas chambers.[6]

Had he been extradited, Walter Kutschmann would have been the first Nazi fugitive handed over by Argentina.[4]