Walter Schuck (30 July 1920 – 27 March 2015) was a German World War II fighter ace who served in the Luftwaffe from 1937 until the end of World War II. He claimed 206 enemy aircraft shot down in over 500 combat missions, eight of which while flying the Messerschmitt Me 262 jet fighter.[1][Note 1] For these achievements, Schuck received the Knight's Cross of the Iron Cross with Oak Leaves (German: Ritterkreuz des Eisernen Kreuzes mit Eichenlaub). The Knight's Cross of the Iron Cross and its higher grade Oak Leaves was awarded to recognise extreme battlefield bravery or successful military leadership.

Born in the Saargebiet (Territory of the Saar Basin), Schuck volunteered for service in the Luftwaffe of the Third Reich in 1936 and was accepted in 1937. After a period of training at various pilot and fighter pilot schools, he was posted to Jagdgeschwader 5 (JG 5—5th Fighter Wing), operating on the most northern section of the Eastern Front, the Arctic Front, in April 1942. In April 1944 he was awarded the Knight's Cross of the Iron Cross for 84 aerial victories. Following his 171st aerial victory he was injured in combat and received the Knight's Cross of the Iron Cross with Oak Leaves during his convalescence. In early 1945 Schuck transferred to Jagdgeschwader 7 (JG 7—7th Fighter Wing) which operated the then revolutionary jet fighter Me 262. Claiming a further eight aerial victories, he was forced to bail out when his aircraft was shot down by a P-51 Mustang on 10 April 1945. Schuck sustained minor injuries preventing him from flying further combat missions.

Schuck was born on 30 July 1920 in Frankenholz, now part of Bexbach, in the Saargebiet, at the time a region of Germany occupied and governed by the United Kingdom and France from 1920 to 1935 under a League of Nations mandate. Schuck was one of five children of Jakob Schuck, a coal miner and veteran of World War I, and his wife.[2] After graduation from the Volksschule (primary school), he unsuccessfully applied for an apprenticeship at the coal mine in Falkenhorst. Money was tight in the family and higher education was out of reach. He then jobbed at a local brickyard. After a plebiscite on 13 January 1935, the Saargebiet was restored to Germany on 1 March 1935. The introduction of the compulsory military service on 16 March 1935 was seen by Schuck as a career opportunity and a chance to fulfill his dream of flying. His father, who had experienced the trench warfare during World War I, advised him to take every opportunity to avoid service in the infantry.[3] Schuck volunteered for service in the Luftwaffe of the Wehrmacht at the age of 16, before he could be conscripted into the infantry.[4] 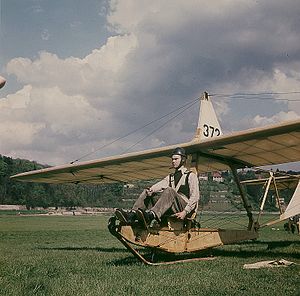 Schuck received a letter in early 1937 that he had been accepted by the Luftwaffe. Prior to enlisting he had to complete his six month of Reichsarbeitsdienst (Reich Labour Service), which he began on 3 April 1937. His recruit training began in November 1937 with the 2. Fliegerersatzabteilung 24 (2nd Flier Replacement Unit 24) in Quakenbrück.[4] On 1 April 1938 he was transferred to the Flughafenbetriebskompanie (Airport Operation Company) of Kampfgeschwader 254 (KG 254—254th Bomber Wing) to Gütersloh. Initially Schuck was tasked with security guard duties before he was assigned to help a fellow soldier, a truck driver, haul material around the airbase. Schuck did not possess a drivers license, but he was unofficially taught how to drive the 3-tonne Mercedes truck. This impressed his commanding officer, Hauptmann (Captain) Schneiderberger, who transferred him to the glider pilot school at Schüren, near Meschede in the Sauerland, after the Sudeten Crisis.[6] After a few weeks at Schüren, Schuck returned to Gütersloh in mid-November 1938.[7]

In February 1939, Schuck attended a three-month course at the Luftfahrttechnische Schule (aeronautical technical school) at Bonn-Hangelar. Following this, he was transferred back to Quakenbrück, this time to the A/B Fliegerschule (flight school for the pilot license) of Fliegerausbildungsregiment 82 (flight training regiment). Flight training in the Luftwaffe progressed through the levels A1, A2 and B1, B2, referred to as A/B flight training. A training included theoretical and practical training in aerobatics, navigation, long-distance flights and dead-stick landings. The B courses included high-altitude flights, instrument flights, night landings and training to handle the aircraft in difficult situations. Schuck logged his first solo flight after only 18 takeoff and landings. Normally the first solo flight was flown after 30 to 40 accompanied flights.[7] Schuck completed his B2 flight training just prior to the start of the Battle of France on 10 May 1940. He received his A/B pilot license on 14 May 1940.[8]

Schuck initially wanted to become an aerial reconnaissance pilot, flying the Dornier Do 17.[8] However, due to disciplinary problems following unauthorized aerobatics on a Focke-Wulf Fw 56 "Stösser" and an open conflict with his commanding officer, Oberleutnant Brunner, Schuck ran the risk of a potential court-martial. To avoid further escalations Schuck was transferred to the Jagdfliegerschule (fighter pilot school) at Werneuchen.[9] He arrived at Werneuchen on 16 June 1940 where he was assigned to the 3. Staffel (3rd squadron). The entire Gruppe was under the command of Oberleutnant Klaus Quaet-Faslem. Schuck's fighter pilot instructor was Oberfeldwebel Hobe, who was aware of Schuck's disciplinary history. Hobe commented "Schuck, we don't want problems here. We now go on a test flight and I am sure that you will be leaving afterwards". Fearful that this might have end his flying career, Schuck followed Hobe's every maneuver, which impressed Quaet-Faslem who had witnessed their test flight. Schuck's flying career was saved. At Werneuchen the pilots were first trained on the Messerschmitt Bf 109 B-2, later the Bf 109 E-1, which had a more powerful engine.[10] Schuck scored more than 90% hits during target practice, the highest score then achieved at Werneuchen. After his graduation from the fighter pilot school, he was transferred to the 3. Staffel of Ergänzungsjagdgruppe Merseburg (Supplementary Fighter Group) on 2 September 1940.[11]

After a spell with Jagdgeschwader 3 (JG 3—3rd Fighter Wing) in October 1940, when I./JG 3 was tasked to give top cover to Adolf Hitler en route to Belgium, which wasn't known at the time.[12][Note 2]

Schuck was posted to 7 Staffel, Jagdgeschwader 5 (JG 5—5th Fighter Wing) in April 1942, flying on the Arctic Front. He claimed his first victory on 15 May 1942, a Mikoyan-Gurevich MiG-3. On 5 June he shot down four Russian fighters and by April 1943 he had claimed 54 victories against the Soviets. In April 1944 he was awarded the Knight's Cross of the Iron Cross[13] for his score of 84 kills. On 15 June 1944 he claimed his 100th victory on a day when he shot down 6 aircraft, an ace-in-a-day achievement. He was the 78th Luftwaffe pilot to achieve the century mark.[14] Two days later he had his most successful day, claiming 12 victories in 24 hours, a feat never surpassed in JG 5. In August he became commander of 10 Staffel, JG 5. His new responsibility of Staffelkapitän (squadron leader) did not come easily to Schuck, and discipline in 10./JG 5 deteriorated to the point that Geschwaderkommodore Heinrich Ehrler intervened with Schuck, before Schuck managed to restore the necessary military discipline.[15]

A few days after claiming his 171st aerial victory, Schuck was wounded by glass splinters that struck his cheek and nose. A splinter penetrated his jaw and got stuck in one of his teeth. To remove this splinter he required surgery. While in the hospital recovering from this operation, Schuck received notice that he had been awarded the Knight's Cross of the Iron Cross with Oak Leaves.[13][16] The presentation of the Oak Leaves was made on 7 November 1944 at the Reichsluftfahrtministerium (RLM— Ministry of Aviation) in Berlin by Reichsmarschall Hermann Göring. Schuck received this award together with twelve other soldiers on this day, among them were the Fallschirmjäger Generalmajor Heinz Trettner, Oberst Friedrich August Freiherr von der Heydte, and the ground attack and bomber pilots Hauptmann Franz Kieslich and Hauptmann Diether Lukesch. Schuck was the only fighter pilot so honored on this day.[17] 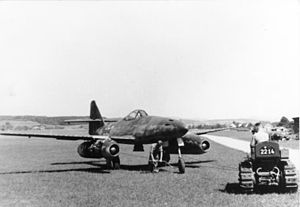 After leaving JG 5 Oberleutnant Schuck was trained on the Messerschmitt Me 262 Jet fighter and in early March 1945 was asked by Geschwaderkommodore (wing commander) Theodor Weissenberger to join Jagdgeschwader 7 (JG 7—7th Fighter Wing). His maiden flight on the Me 262 was on 20 March 1945. After a few more familiarizing flights on the Me 262, Schuck and another pilot took off on 24 March 1945 to familiarize themselves with the high altitude characteristics of the aircraft. Cruising at an altitude of 10,000 meters (33,000 ft), flight control informed them of enemy fighters in the vicinity. Schuck immediately set course for the enemy formation and spotted one P-38 Lightning and two P-51 Mustang fighters. In the resulting combat Schuck shot down the two P-51 fighters but the P-38 Lightning escaped.

On 10 April 1945 he claimed four B-17 Flying Fortresses shot down. One of the bombers was "Henn's Revenge" of the 303rd Bombardment Group, and another was "Moonlight Mission" of the 457th Bombardment Group.[21] Shortly afterwards, his Me 262 was hit by a P-51 Mustang of the fighter escort, piloted by Lt. Joseph Anthony Peterburs of the 55th Fighter Squadron, 20th Fighter Group Schuck having to bail out. Schuck sprained both ankles upon landing and the war ended before he recovered.[22]