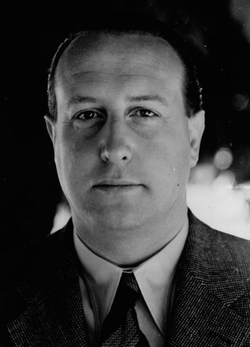 Walther Hewel (2 January 1904 – 2 May 1945) was a German diplomat before and during World War II, an early and active member of the Nazi Party, and one of German dictator Adolf Hitler's few personal friends.

Hewel was born in 1904 to parents Anton and Elsa in Cologne, where his father ran a cocoa factory. His father died in 1913, leaving Elsa to run the factory.

Although still a teenager at the time, Hewel was one of the earliest members of the Nazi Party, and is calculated to have been between the 200th and 300th person to actually join the group.

Hewel graduated in 1923 and attended the Technical University of Munich. The same year, he took part in the Nazi's failed Beer Hall Putsch. After Hitler's subsequent conviction for treason, Hewel stayed in Landsberg prison with him and, for several months, acted as Hitler's valet.

After the Putsch, Hewel worked for several years as a coffee salesman and planter for a British firm in Dutch East Indies (now Indonesia). In Indonesia, Hewel organised the local branch of the Nazi Party with the membership of German expatriates there. By 1937, the Nazi Party in Indonesia had established branches in Batavia, Bandung, Semarang, Surabaya, Medan, Padang, and Makassar.

During the 1930s, Hewel returned to Germany where he was appointed to the country's diplomatic service and sent to Spain. Journalist James P. O'Donnell remarked that, during this time, Hewel "was almost certainly an agent of Admiral Wilhelm Canaris' Abwehr."

In 1938, Hitler recalled Hewel to Germany. During this time, he resumed his earlier friendship with the dictator.

Hewel served as a diplomat in the Foreign Ministry, and on 15 March 1939 transcribed the conference between Hitler and Czech president Emil Hácha.

Technically Hewel was an ambassador and he was supposed to serve as Joachim von Ribbentrop's liaison to Hitler. However, he spent most of World War II without an official portfolio and once described himself as "an ambassador to nowhere." Although in the later years of the war, as Hitler became more estranged with Ribbentrop, Hewel essentially became Hitler's senior adviser on all foreign policy matters. Survivors of Hitler's inner circle claimed that Hewel owed his position to his long involvement with the Nazi Party, and because he was one of Hitler's friends. In her memoirs, Traudl Junge, Hitler's private secretary, described Hewel as something like Hitler's majordomo. According to Junge, Hewel was placed in charge of coordinating his household, keeping peace between the military and civilian officials around Hitler, and regulating contact between male and female members of Hitler's entourage.

After the war, a waiter in Berlin described Hewel thus:

"He was the type of fellow who always knew how to get a good table by tipping the headwaiter in advance. I remember he would insist on artichoke hearts with his venison. He specialized in that kind of Gemütlichkeit that's never quite genuine unless it's a bit artificial." (O'Donnell, The Bunker, 1978)

Almost all accounts of Hewel described him as a pleasant and good-natured, if not quite intelligent man. He usually ended up dealing with situations and events that Hitler could not handle.

Other members of the inner circle recounted that, unlike many other Nazi leaders, Hewel was able to stay awake and attentive during Hitler's long monologues on topics such as anti-Semitism. For example, Heinz Guderian, when recalling Hewel, remarked that he was "a good raconteur and a good listener."

Hewel tended to be shy around women, and as a result, Hitler often tried to play matchmaker for him. Hewel survived an airplane crash on 21 April 1944 in which General Hans-Valentin Hube was killed. Elizabeth Blanda, a Red Cross nurse looked after Hewel and later married him at Berchtesgaden.

Until Hitler committed suicide on 30 April 1945, Hewel remained in his inner circle. As one of the few people to remain near him until the end, he was said to have tried to cheer Hitler up. Apparently, Hewel was the last individual to engage in a long, personal conversation with Hitler.

Following Hitler's suicide, Hewel escaped the Führerbunker in a group led by SS-Brigadeführer Wilhelm Mohnke. Mohnke planned to break out towards the German Army which was positioned in Prinzenallee. However, Hewel was apparently suffering from psychological stress at the time. In her memoirs, Traudl Junge claimed that, after Hitler's death, Hewel appeared extremely confused and unable to make the simplest decisions for himself.

The group headed along the U-Bahn tunnels, but their route was blocked so they went above ground and later joined hundreds of other German civilians and military personnel who had sought refuge at the Schultheiss-Patzenhofer Brewery. Upon arriving at the holdout on 2 May 1945, Hewel made remarks to the effect that he planned on committing suicide. Despite the efforts of Dr. Ernst-Günther Schenck, who attempted to talk him out of it, Hewel killed himself in the same manner which Professor Dr. Werner Haase had instructed for Hitler, biting down on a cyanide capsule while shooting himself in the head.[1]

According to Schenck, Hitler had actually encouraged Hewel to commit suicide. Hitler warned Hewel that if he was captured by the Red Army, he would be tortured and "mounted in a waxworks". Additionally, Hitler gave Hewel a cyanide capsule and a Walther 7.65 handgun, then had him take an oath to kill himself rather than be captured by the Russians. Further, Schenck stated that Hewel was emotionally and physically exhausted, which contributed to his actions.[2]

Because of his friendship with Hitler, Hewel was given a large amount of leeway in his actions. For example, according to O'Donnell, Hewel played constant practical jokes on his boss, Ribbentrop, in order to amuse Hitler and other members of his entourage.

After the war, Hewel's 1941 diary emerged. Also, after Hitler's suicide, but prior to his own, he spoke with others about his friendship with, and opinion of, Hitler. Right before his suicide, he told Dr. Schenck:

"Hitler was a consummate actor...Toward the end, he was less the leader, Der Führer, than a man flinging from reality as it advanced itself . . . . As I look back at those long briefing sessions, it strikes me that Hitler was hopelessly engulfed in the grandeur of his mission, a sense that was now disintegrating into self-pity. When the goddess Nemesis began to avenge his hubris, he lost his nerve." (O'Donnell, The Bunker)

O'Donnell referred to Hewel as a man who had a front row seat to history, but who lacked the intelligence and perspective to realize it.

Walther Hewel has been portrayed by the following actors in film and television productions.