A war correspondent is a journalist who covers stories firsthand from a war zone. They were also called special correspondents in the 19th century.

Their jobs require war correspondents to deliberately go to the most conflict-ridden parts of the world. Once there, they attempt to get close enough to the action to provide written accounts, photos, or film footage. Thus, being a war correspondent is often considered the most dangerous form of journalism. On the other hand, war coverage is also one of the most successful branches of journalism. Newspaper sales increase greatly in wartime and television news ratings go up. News organizations have sometimes been accused of militarism because of the advantages they gather from conflict. William Randolph Hearst is often said to have encouraged the Spanish–American War for this reason. (See Yellow journalism)

Only some conflicts receive extensive worldwide coverage, however. Among recent wars, the Kosovo War received a great deal of coverage, as did the Persian Gulf War. Many third-world wars, however, tend to receive less substantial coverage because corporate media are often less interested, the lack of infrastructure makes reporting more difficult and expensive, and the conflicts are also far more dangerous for war correspondents. 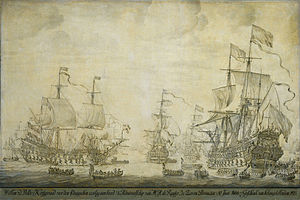 Battle council on the De Zeven Provinciën by Willem van de Velde the Elder. The prelude to the Four Days Battle in 1666.

Written war correspondents have existed as long as journalism. Before modern journalism it was more common for longer histories to be written at the end of a conflict. The first known of these is Herodotus's account of the Persian Wars, however he did not himself participate in the events. Thucydides, who some years later wrote a history of the Peloponnesian Wars was an observer to the events he described.

In the eighteenth century the Baroness Frederika Charlotte Riedesel's Letters and Journals Relating to the War of the American Revolution and the Capture of the German Troops at Saratoga is regarded as the first account of war by a woman. Her description of the events that took place in the Marshall House are particularly poignant because she was in the midst of battle.

The first modern war correspondent is said to be Dutch painter Willem van de Velde, who in 1653 took to sea in a small boat to observe a naval battle between the Dutch and the English, of which he made many sketches on the spot, which he later developed into one big drawing that he added to a report he wrote to the States General. A further modernization came with the development of newspapers and magazines. One of the earliest war correspondents was Henry Crabb Robinson, who covered Napoleon's campaigns in Spain and Germany for The Times of London. Another early correspondent was William Hicks who letters describing the Battle of Trafalgar (1805) were also published in The Times.[1]

Early film and television news rarely had war correspondents. Rather, they would simply collect footage provided by other sources, often the government, and the news anchor would then add narration. This footage was often staged as cameras were large and bulky until the introduction of small, portable motion picture cameras during World War II. The situation changed dramatically with the Vietnam War when networks from around the world sent cameramen with portable cameras and correspondents. This proved damaging to the United States as the full brutality of war became a daily feature on the nightly news.

The discourse in mediated conflicts is influenced by its public character. By forwarding information and arguments to the media, conflict parties attempt to use the media influence to gain support from their constituencies and persuade their opponents.[2] The continued progress of technology has allowed live coverage of events via satellite up-links. The rise of twenty-four hour news channels has led to a heightened demand for coverage.

William Howard Russell, who covered the Crimean War, also for The Times, is often described as the first modern war correspondent. The stories from this era, which were almost as lengthy and analytical as early books on war, took numerous weeks from being written to being published.

Another renowned journalist, Ferdinando Petruccelli della Gattina, Italian correspondent of European newspapers such as La Presse, Journal des débats, Indépendance Belge and The Daily News, was known for his extremely gory style in his articles but involving at the same time. Jules Claretie, critic of Le Figaro, was amazed about his correspondence of the Battle of Custoza, during the Third Italian War of Independence. Claretie wrote, "Nothing could be more fantastic and cruelly true than this tableau of agony. Reportage has never given a superior artwork."[3]

It was not until the telegraph was developed that reports could be sent on a daily basis and events could be reported as they occurred that the short mainly descriptive stories of today became common. Press coverage of the Russo-Japanese War was affected by restrictions on the movement of reporters and strict censorship. In all military conflicts which followed this 1904-1905 war, close attention to more managed reporting was considered essential.[4]

The First Balkan War (1912-1913) between the Balkan League (Serbia, Greece, Montenegro and Bulgaria) and the Ottoman Empire, and the Second Balkan War (1913) between Bulgaria and its former allies Serbia and Greece, was actively covered by a large number of foreign newspapers, news agencies, and movie companies. An estimated 200-300 war correspondents, war photographers, war artists, and war cinematographers were active during these two nearly sequential conflicts.

The First World War was characterized by rigid censorship. British Lord Kitchener hated reporters, and so reporters were banned from the Front at the start of the war. But reporters such as Basil Clarke and Philip Gibbs lived as fugitives near the Front, sending back their reports. The Government eventually allowed some accredited reporters in April 1915, and this continued until the end of the war. This meant, though, that the Government was able to control what they saw.

French authorities were equally opposed to war journalism, but less competent (criticisms of the French high command were leaked to the press during the Battle of Verdun in 1916). By far the most rigid and authoritarian regime[citation needed] was imposed by the United States, though General John J. Pershing allowed embedded reporters (Floyd Gibbons had been severely wounded at the Battle of Belleau Wood in 1918).

The US conflict in Vietnam saw the tools and access available to war correspondents expanded significantly. Innovations such as cheap and reliable hand-held color video cameras, and the proliferation of television sets in Western homes give Vietnam-era correspondents the ability to portray conditions on the ground more vividly and accurately than ever before. Additionally, the US Military allowed unprecedented access for journalists, with almost no restrictions on the press,[5] unlike in previous conflicts. These factors produced military coverage the likes of which had never been seen or anticipated, with explicit coverage of the human suffering produced by the war available right in the livingrooms of everyday people.[6]

Vietnam-era war correspondence was markedly different from that of WWI and WWII, with more focus on investigative journalism and discussion of the ethics surrounding the war and America's role in it.[6] Reporters from dozens of media outlets were dispatched to Vietnam, with the number of correspondents surpassing 400 at the peak of the war.[7] Vietnam was a dangerous war for these journalists, and 68 would be killed before the conflict came to a close.[5]

Many within the US Government and elsewhere would blame the media for the American failure in Vietnam, claiming that media focus on atrocities, the horrors of combat and the impact on soldiers damaged moral and eliminated support for the war at home.[8] Unlike in older conflicts, where Allied journalism was almost universally supportive of the war effort, journalists in the Vietnam theater were often harshly critical of the US military, and painted a very bleak picture of the war.[6] In an era where the media was already playing a significant role in domestic events such as the Civil Rights Movement, war correspondence in Vietnam would have a major impact on the American political scene. Some have argued that the conduct of war correspondents in Vietnam is to blame for the tightening of restrictions on journalists by the US in wars that followed, including the Persian Gulf war and the conflicts in Iraq and Afghanistan.[5]

The role of war correspondents in the Persian Gulf war would prove to be quite different from their role in Vietnam. The Pentagon blamed the media for the loss of the Vietnam war,[8] and prominent military leaders did not believe the United States could sustain a prolonged and heavily televised war.[9] As a result numerous restrictions were placed on the activities of correspondents covering the war in the Gulf. Journalists allowed to accompany the troops were organized into "pools", where small groups were escorted into combat zones by US troops and allowed to share their findings later.[9] Those who attempted to strike out on their own and operate outside the pool system claim to have found themselves obstructed directly or indirectly by the military, with passport visas revoked and photographs and notes taken by force from journalists while US forces observed.[5]

Beyond military efforts to control the press, observers noted that press reaction to the Gulf War was markedly different from that of Vietnam. Critics claim that coverage of the war was "jingoistic" and overly favorable towards American forces, in harsh contrast to the criticism and muckraking that had characterized coverage of Vietnam.[10] Journalists like CNN's Peter Arnett were lambasted for reporting anything that could be construed as contrary to the war effort, and commentators observed that coverage of the war in general was "saccharine" and heavily biased towards the American account.[10]

These trends would continue into the Afghanistan and Iraq wars, where the pool model was replaced by a new system of Embedded journalism.[5][7] 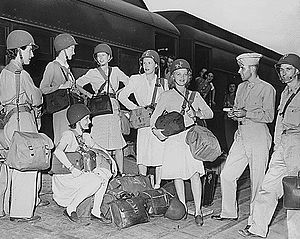 Some of them became authors of fiction drawing on their war experiences, including Davis, Crane and Hemingway.