Warren is a city in Macomb County in the U.S. state of Michigan. The 2010 census places the city's population at 134,056,[5] making Warren the largest city in Macomb County, the third largest city in Michigan, and Metro Detroit's largest suburb. The city is home to a wide variety of businesses, including General Motors Technical Center, the United States Army Detroit Arsenal, home of the United States Army TACOM Life Cycle Management Command and the Tank Automotive Research, Development and Engineering Center (TARDEC), the headquarters of Big Boy Restaurants International, and Asset Acceptance. The current mayor is James R. Fouts, who was elected to his first mayoral term in November 2007.

Beebe's Corners, the original settlement in what would become the city of Warren, was founded in 1830 at the corner of Mound Road and Chicago Road; its first resident was Charles Groesbeck.[6] Beebe's Corners was a carriage stop between Detroit and Utica, and included a distillery, mill, tavern, and trading post.[6][7] It was not until 1837 that the now-defunct Warren Township was organized around the settlement, first under the name Hickory, then renamed Aba in April 1838, and finally renamed Warren shortly thereafter.[8] It was named for War of 1812 veteran, and frontier cleric, Rev. Abel Warren. However, when it was originally organized the township was named for Rev. Warren who was a Methodist Episcopal preacher who left his native New York in 1824 for Shelby Township. He went throughout the present-day Macomb, Lapeer, Oakland, and St. Clair Counties, baptizing, marrying, and burying pioneers of the area, as well as establishing congregations and preaching extensively.[9] He was the first licensed preacher in the State of Michigan.[10]

Another version of the source of the city's name claims it was "named for General Joseph Warren (1741–1775), who fell at the Battle of Bunker Hill.[11]

The settlement was formally incorporated as the Village of Warren from Warren Township on April 28, 1893 out of one square mile bound by 14 Mile Road and 13 Mile Road to the north and south, and in half-a-mile east and west of Mound Road.[6] The small village grew slowly, and had a population of 582 in 1940 and 727 in 1950, while the larger surrounding township grew at a much quicker pace.[12]

The Red Run and Bear Creek, just small creeks back in the 1800s, has blossomed into an open major inter-county stormdrain flowing thru Warren, into the Clinton River, and onwards to Lake St. Clair.[13]

The Village of Warren and most of the surrounding Township of Warren incorporated as a city in 1957, less the city of Center Line, which had incorporated as a village from Warren Township in 1925 and as a city in 1936.[8] Between 1950 and 1960, Warren's population soared from 42,653 to 89,426. This population explosion was fueled by the post-WWII Baby Boom and later, by white flight from its southern neighbor of Detroit in that decade. This change in population continued into the next decade when the city's population doubled again. As the community has matured, its population has begun to gradually decline.

The following is a list of the previous mayors of the city. The current mayor is James Fouts.[14] Mayoral elections are currently non-partisan.

According to the United States Census Bureau, the city has a total area of 34.46 square miles (89.25 km2), of which 34.38 square miles (89.04 km2) is land and 0.08 square miles (0.21 km2) is water.[1] The city covers a six-mile-by-six mile (10 km x 10 km) square in the southwest corner of Macomb County in suburban Detroit (minus Center Line, which is a small city totally enclosed within Warren). Other cities bordering on Warren are Detroit, Hazel Park, Madison Heights, Sterling Heights, Fraser, Roseville, and Eastpointe.

There are a number of distinguishing characteristics about Warren which render it unique among American cities of its relative size. Warren was one of the fastest-growing municipalities in the country between 1940 and 1970, roughly doubling its population every 10 years. In 1940 the official population of Warren Township was 22,146; in 1950, it was 42,653; in 1960, after Warren Township had become the City of Warren, population had risen to 89,240; and by 1970 it had grown to 179,260.

Warren's population is currently one of the oldest among large cities in the United States. 16.1% of Warren's population was 65 or older at the last census, tied for fifth with Hollywood, Florida among cities with 100,000+ population, and in fact the highest-ranking city by this measure outside of Florida or Hawaii.[18] Warren is ranked 1st in the nation for longevity of residence. Residents of Warren on average have lived in that community 35.5 years, compared to the national average of eight years for communities of 100,000+ population.[citation needed] Warren remains a population center for people of Polish, Lebanese, Ukrainian, Scots-Irish, Filipino, Maltese and Assyrian/Chaldean descent.

There were 53,442 households of which 30.6% had children under the age of 18 living with them, 42.2% were married couples living together, 15.9% had a female householder with no husband present, 5.9% had a male householder with no wife present, and 36.0% were non-families. 30.4% of all households were made up of individuals and 12.6% had someone living alone who was 65 years of age or older. The average household size was 2.49 and the average family size was 3.11. 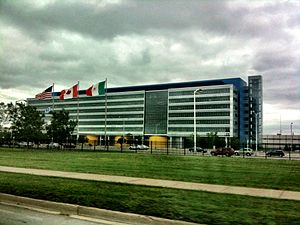 Companies based in Warren include Big Boy Restaurants, Art Van and SRG Global.

According to the city's 2010 Comprehensive Annual Financial Report,[21] the top employers in the city are:

The City of Warren established a Christian prayer station at city hall that is operated by the Pentecostal Tabernacle Church of Warren. Douglas Marshall requested establishing an atheist station and was denied by the city government. The American Civil Liberties Union, Americans United for Separation of Church and State, and Freedom from Religion Foundation jointly filed a complaint against the city. In 2015 there was a $100,000 judgment against the city government and mayor James R. Fouts for denying Marshall the right to establish his atheist station.[22]

Much of Southeast Warren's residential architecture is based on the Bungalows built immediately after World War II. To the north of Stephens Road, many homes were built after 1960 in the brick ranch style. Besides the residential areas, Southeast Warren is also occupied by multiple industrial parks. 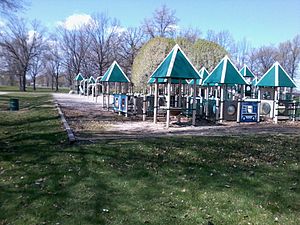 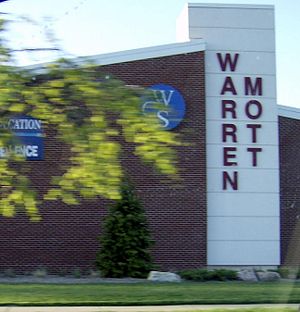 Warren is served by six public school districts, including:[30]

Warren Public Library consists of one main library and three branches. The Civic Center Library is located on the ground floor of the city hall. The Arthur Miller Branch is inside the Warren Community Center. The other two branches are the Maybelle Burnette Branch and the Dorothy Busch Branch.[31]

The city recreation department supports a community center and a recreation center along with a system of 24 parks. The Warren Symphony Orchestra gives several concerts per season. In 2003 the city built a brand new Community Center where the old Warren High School was.

Universal Mall, an enclosed shopping mall, was built in the city in 1965. In 2009, it was demolished for a new outdoor shopping center.

The Italian American Cultural Society (IACS) had been located in Warren for a 20-year period. In 2004 it moved to its current location in Clinton Township. Its previous location was sold to a charter school in July 2004.[34]

The Warren Police Department serves as the main law enforcement agency in the city.

There are nine recognized Michigan historical markers in the city.[36] They are:

The tenth and eleventh markers are technically in Center Line, Michigan but are included because of their proximity (both in distance and in history) to Warren:

Additionally, about two dozen markers have been placed around designated cites in the city by the Warren Historical and Genealogical Society.[39]