From Infogalactic: the planetary knowledge core
Jump to: navigation, search
For other uses, see Warrior (disambiguation). 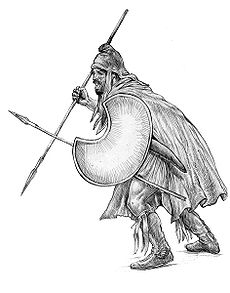 Drawing of a Thracian peltast of 400 BC 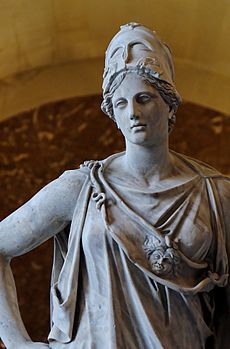 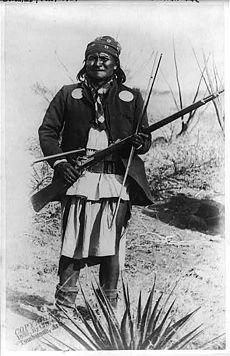 A warrior is a person specializing in combat or warfare, especially within the context of a tribal or clan-based warrior culture society that recognizes a separate warrior class or caste.

In tribal societies engaging in endemic warfare, warriors often form a caste or class of their own. In feudalism, the vassals essentially form a military or warrior class, even if in actual warfare, peasants may be called to fight as well. In some societies, warfare may be so central that the entire people (or, more often, large parts of the male population) may be considered warriors, for example in the Iron Age Germanic tribes and Indian clans like the Rajputs.

While the warrior class in tribal societies is typically all-male, there are some exceptions on record where women (typically unmarried, young women) formed part of the warrior class, particularly in pre-modern Japan.

A purported group of fighting women is the legendary Amazons, recorded in Classical Greek mythology. Similarly, the Valkyrie are depicted in Norse mythology, particularly the Icelandic Etta.

Many women not only fought on the field but led entire hosts of men within Pictish, Briton, and Irish Tribes in Pre Christian culture.[citation needed] Bouduka is a good example of a Bronze Age female warriorleader. Tomoe Gozen is celebrated in Japanese history as a woman samurai General in the 12th Century. Joan of Arc, nicknamed "The Maid of Orléans" is considered a heroine of France for her role during the Lancastrian phase of the Hundred Years' War.

Further information: Estates of the Realm and Trifunctional hypothesis

The military caste in a feudal society is evolved from—but not identical with—the warrior class in a tribal society.

Many pre-modern states had castes, estates or social groups dedicated to warfare. This includes the Khalsa and Kshatriya castes in ancient and modern India, the samurai class in feudal Japan, the Timawa and Maharlika classes in pre-colonial Philippines and noble knights in feudal Europe.

In many societies in which a specialized warrior class exists, specific codes of conduct (ethical code or honour code) are established to ensure that the warrior class is not corrupted or otherwise dangerous to the rest of society. Common features include valuing honour in the forms of faith, loyalty and courage.

Examples include the following:

Warriors' honour is dependent on following the code. Common virtues in warrior codes are mercy, courage, and loyalty. 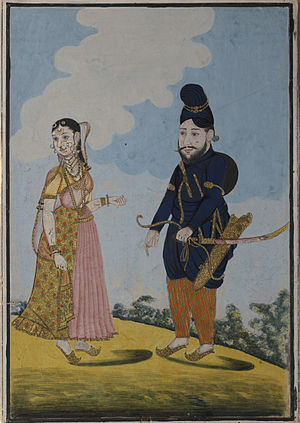 An Indian Mughal Era Warrior and his wife

With the end of the Middle Ages and the professional standing armies of Early Modern warfare, the concept of a "warrior class" or "military caste" became an anachronism. The term "warrior" is still sometimes used, anachronistically, to refer to professional soldiers or mercenaries.

Due to the heroic connotations of the term "warrior", this metaphor is especially popular in publications advocating or recruiting for a country's military.[1]

In addition to the literal meaning, now mostly historical, the term has acquired a figurative sense referring to "a person who shows or has shown great vigor, courage, or aggressiveness, as in politics or athletics."[2] The "warrior" metaphor in sports is particularly popular in combat sport, as evident from brand names such as Warrior-1 MMA, Cage Warriors, Supreme Warrior Championship, etc.

A spiritual warrior is a person who battles with the "universal enemy," self-ignorance (avidya), the ultimate source of suffering according to dharmic philosophies.[3] The term is applied in religious and metaphysical writing. There are self-described spiritual warriors.[4] The spiritual warrior can be described as an archetype character on a journey for self-discovery.[5]