From Infogalactic: the planetary knowledge core
Jump to: navigation, search
For more details on this topic, see Jewish ghettos in German-occupied Poland. 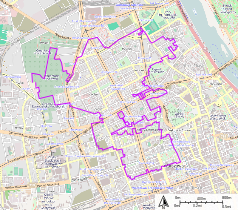 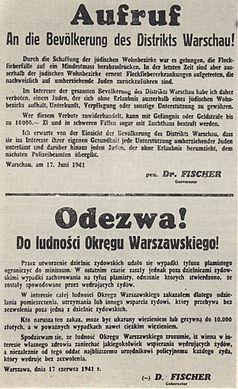 The Warsaw Ghetto[1] (German: Warschauer Ghetto, called by the German authorities: „Jüdischer Wohnbezirk in Warschau“ (Jewish residential district in Warsaw); Polish: getto warszawskie) was the largest of all the Jewish ghettos in Nazi-occupied Europe during World War II. It was established in the Polish capital between October and November 16, 1940, in the territory of the General Government of German-occupied Poland, with over 400,000 Jews from the vicinity residing in an area of 3.4 km2 (1.3 sq mi). From there, at least 254,000 Ghetto residents were sent to the Treblinka extermination camp over the course of two months in the summer of 1942.

The death toll among the Jewish inhabitants of the Ghetto, between deportations to extermination camps, Großaktion Warschau, the Warsaw Ghetto Uprising, and the subsequent razing of the ghetto, is estimated to be at least 300,000.[2][3][4][5]

The construction of the ghetto wall started on April 1, 1940.[6] The Warsaw Ghetto was established by the German Governor-General Hans Frank on October 16, 1940 in an area of Warsaw primarily occupied by Polish Jews. Frank ordered all Jews in Warsaw and its suburbs rounded up and herded into the Ghetto. At this time, the population in the Ghetto was estimated to be 400,000 people, about 30% of the population of Warsaw;[7] however, the area of the Ghetto was only about 2.4% of that of Warsaw.[8]

The Germans closed the Warsaw Ghetto to the outside world on November 16, 1940. The wall was typically 3 m (9.8 ft) high and topped with barbed wire. Escapees could be shot on sight. The borders of the ghetto changed many times during the next years.

The ghetto was divided by Chłodna Street, which due to its importance (as one of Warsaw's major east-west arteries) was excluded from it. The area south of Chłodna was known as the “Small Ghetto”, while the area north of this street was the “Large Ghetto”. Those two parts were connected by Żelazna Street, and a special gate was built at its intersection with Chłodna Street. In January 1942, the gate was closed and a wooden footbridge was built in its place, which after the war became one of the symbols of the Holocaust.[9] The first commissioner of the Warsaw ghetto was his chief organizer SA-Standartenführer Waldemar Schön. He was succeeded in May 1941 by Heinz Auerswald.

Administration of the Ghetto

Like all the ghettos in Poland, the Germans ascribed the administration to a Judenrat (a council of the Jews), led by an "Ältester" (the eldest).[10] In Warsaw this role was attributed to Adam Czerniaków, who chose a policy of collaboration with the Nazis rather than revolt. Adam Czerniaków confided his harrowing experience in several diaries.[11] He became aware of his own tragic duplicity in July 1942 and committed suicide.

Although his personality has remained less infamous than Mordechai Chaim Rumkowski, the "Ältester" of the Lodz Ghetto, Adam Czerniaków's collaboration with the Nazi policy is the paradigm of the attitude of the majority of the European Jews vis à vis Nazism. The Jewish collaboration authority was supported by a Jewish Ghetto Police. According to Lucy S. Dawidowicz:

From its inception, the Judenrat was looked upon as a reincarnation of the kehillas. Czerniakow's first draft of October, 1939; for organizing the Warsaw Judenrat, was just a rehash of conventional kehilla departments: chancellery, welfare, education, rabbinate...

In performing these functions, the kehilla had operated a "gemeinschaft" institution... But the Kehilla was an anomalous institution. Throughout its history in czarist Russia, it served also as an instrument of the state, obligated to carry out the regime's policies within the Jewish community, even though these policies were frequently oppressive and specifically anti-Jewish...[12]

Ghetto children
175px
A child dying in the streets of the Warsaw Ghetto September 19, 1941

During the next year and a half, thousands of Polish Jews as well as some Romani people from smaller cities and the countryside were brought into the Ghetto, while diseases (especially typhus),[13] and starvation kept the inhabitants at about the same number. Average food rations in 1941 for Jews in Warsaw were limited to 184 calories, compared to 699 calories for gentile Poles and 2,613 calories for Germans.[14]

Unemployment was a major problem in the ghetto. Illegal workshops were created to manufacture goods to be sold illegally on the outside and raw goods were smuggled in, often by children. Hundreds of four- to eight-year-old Jewish children went across en masse to the "Aryan side," sometimes several times a day, smuggling food into the ghettos, returning with goods that often weighed more than they did. Smuggling was often the only source of subsistence for Ghetto inhabitants, who would otherwise have died of starvation.

Despite the grave hardships, life in the Warsaw Ghetto was rich with educational and cultural activities, conducted by its underground organizations. Hospitals, public soup kitchens, orphanages, refugee centers and recreation facilities were formed, as well as a school system. Some schools were illegal and operated under the guise of a soup kitchen. There were secret libraries, classes for the children and even a symphony orchestra. Rabbi Alexander Zusia Friedman, secretary-general of Agudath Israel of Poland, was one of the Torah leaders in the Warsaw Ghetto. He organized an underground network of religious schools, including "a Yesodei HaTorah school for boys, a Bais Yaakov school for girls, a school for elementary Jewish instruction, and three institutions for advanced Jewish studies". These schools, operating under the guise of kindergartens, medical centers and soup kitchens, were a place of refuge for thousands of children and teens, and hundreds of teachers. In 1941, when the Germans gave official permission to the local Judenrat to open schools, these schools came out of hiding and began receiving financial support from the official Jewish community.[15]

Over 100,000 of the Ghetto's residents died due to rampant disease or starvation, as well as random killings, even before the Nazis began massive deportations of the inhabitants from the Ghetto's Umschlagplatz to the Treblinka extermination camp during the Grossaktion Warschau, part of the countrywide Operation Reinhard. Between Tisha B'Av (July 23) and Yom Kippur (September 21) of 1942, about 254,000 Ghetto residents (or at least 300,000 by different accounts)[7] were sent to Treblinka and murdered there.[16]

Friedman alerted world Jewry to the start of deportations from the Warsaw Ghetto in a coded message. His telegram read: "Mr. Amos kept his promise from the fifth-third." He was referring to the Book of Amos, chapter 5, verse 3, which reads: "The city that goes out a thousand strong will have a hundred left, and the one that goes out a hundred strong will have ten left to the House of Israel".[17]

Polish resistance officer Jan Karski reported to the Western governments in 1942 on the situation in the Ghetto and on the extermination camps. By the end of 1942, it was clear that the deportations were to their deaths, and many of the remaining Jews decided to fight.[7]

For years, Ghetto residents in the group Oyneg Shabbos had discreetly chronicled conditions and hid their photos, writings, and short films in improvised time capsules; their activity increased after learning that transports to "resettlement" actually led to the mass killings. In May 1942, Germans began filming a propaganda movie titled "Das Ghetto" which was never completed. Footage is shown in the 2010 documentary called "A Film Unfinished" which concerns the making of "Das Ghetto" and correlates scenes from 'Das Ghetto' with descriptions of the filming of these scenes that Czerniakow mentions in his diary.

Warsaw Ghetto Uprising and destruction of the Ghetto

On January 18, 1943, after almost four months without any deportations, the Germans suddenly entered the Warsaw ghetto intent upon a further deportation. Within hours, some 600 Jews were shot and 5,000 others rounded up.

The Germans expected no resistance, but preparations to resist had been going on since the previous autumn.[18] The first instances of Jewish armed resistance began that day. The Jewish fighters had some success: the expulsion stopped after four days and the ŻOB and ŻZW resistance organizations took control of the Ghetto, building shelters and fighting posts and operating against Jewish collaborators.[13]

The final battle started on the eve of Passover of April 19, 1943, when a Nazi force consisting of several thousand troops entered the ghetto. After initial setbacks, the Germans under the field command of Jürgen Stroop systematically burned and blew up the ghetto buildings, block by block, rounding up or murdering anybody they could capture. Significant resistance ended on April 28, and the Nazi operation officially ended in mid-May, symbolically culminating with the demolition of the Great Synagogue of Warsaw on May 16. According to the official report, at least 56,065 people were killed on the spot or deported to German Nazi concentration and death camps (Treblinka, Poniatowa, Majdanek, Trawniki).

Ruins of Warsaw Ghetto, leveled by German forces, according to Adolf Hitler's order, after suppressing of the Warsaw Ghetto Uprising in 1943. North-west view, left - the Krasiński`s Garden and Swiętojerska street, photo taken in 1945

Remnants of the Ghetto today 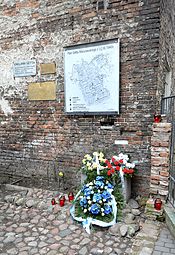 Ghetto wall remnant behind a house at 62 Złota Street 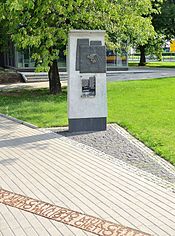 One of 22 Warsaw Ghetto boundary markers

The ghetto was almost entirely leveled during the uprising; however, a number of buildings and streets survived, mostly in the "small ghetto" area, which had been included into the Aryan part of the city in August 1942 and was not involved in the fighting.

In 2008 and 2010 Warsaw Ghetto boundary markers were built along the borders of the former Jewish quarter, where from 1940−1943 stood the gates to the ghetto, wooden footbridges over Aryan streets, and the buildings important to the ghetto inmates.

The four buildings at 7, 9, 12 and 14 Próżna Street are among the best known original residential buildings that in 1940-41 housed Jewish families in the Warsaw Ghetto. They have largely remained empty since the war. The street is a focus of the annual Warsaw Jewish Festival. In 2011−2013 buildings at number 7 and 9 underwent extensive renovations and have become office space.

Nearby, the Nożyk Synagogue also survived the war. It was used as a horse stable by the German Wehrmacht. The synagogue has today been restored and is once again used as an active synagogue.

The best preserved fragments of the ghetto wall are located 55 Sienna Street, 62 Złota Street, and 11 Waliców Street (the last two being walls of the pre-war buildings).

There are two Warsaw Ghetto Heroes' monuments, unveiled in 1946 and 1948, near the place where the German troops entered the ghetto on 19 April 1943.

In 1988 a stone monument was built to mark the Umschlagplatz.

There is also a small memorial at ul. Mila 18 to commemorate the site of the Jewish underground headquarters during the Ghetto Uprising.

In December 2012, a controversial statue of a kneeling and praying Adolf Hitler was installed in a courtyard of the Ghetto. The artwork by Italian artist, Maurizio Cattelan, entitled "HIM", has received mixed reactions worldwide. Many feel that it is unnecessarily offensive, while others, such as Poland's chief rabbi, Michael Schudrich, feel that is thought-provoking, even "educational".[19]

People of the Warsaw Ghetto