The warty comb jelly or sea walnut[1] (Mnemiopsis leidyi) is a species of tentaculate ctenophore (comb jelly), originally native to the western Atlantic coastal waters. Three species have been named in the genus Mnemiopsis, but they are now believed to be different ecological forms of a single species M. leidyi by most zoologists.[2]

Mnemiopsis have a lobed body that is oval-shaped and transparent, with four rows of ciliated combs that run along the body vertically and glow blue-green when disturbed. They have several feeding tentacles. Unlike cnidarians, Mnemiopsis doesn't sting. Their body contains 97% water. They are small organisms, having a maximum body length of roughly 7–12 centimetres (3–5 in) and a diameter of 2.5 centimetres (1 in).

Mnemiopsis is a carnivore that consumes zooplankton including crustaceans,[3] other comb jellies, and eggs and larvae of fish; it is sometimes known to eat smaller individuals of its own kind. It also has several other predators. Many are vertebrates, including species of birds and fish. Some predators include other members of gelatinous zooplankton such as Beroe ctenophores and various Scyphozoa (jellyfish).

This comb jelly has the capacity for self-fertilization, as they are hermaphroditic. They have gonads that contain the ovary and spermatophore bunches in their gastrodermis. This animal carries 150 eggs along each meridional canal. Eggs and sperm are released into the water column where external fertilization takes place. The spawning commences at late evening or at 1:00 or 2:00 a.m. The spawning eggs develop a thick outer layer within 1 minute after touching the seawater. As many as 10,000 eggs can be produced from large specimens in areas with good prey abundance. Egg production can start when the animals reach about 15 mm in length. Egg production increases with ctenophore size, and it is unclear when senescence occurs.

The species is blind, has no brain and moves so slowly that it is referred to as "sea walnut".[4]

As an invasive species

Mnemiopsis leidyi was introduced in the Black Sea in the 1980s, where only one species of comb jelly, the small sea gooseberry Pleurobrachia pileus occurred until then. The most likely cause of its introduction is accidentally by merchant ships' ballast water. The first Black Sea record was in 1982.[5]

By 1989, the Black Sea population had reached the highest level, with some 400 specimens per m³ of water (>10 animals/cubic foot) in optimal conditions.[3] Afterwards, due to depletion of foodstocks resulting in lower carrying capacity, the population dropped somewhat.

In the Black Sea, M. leidyi eats eggs and larvae of pelagic fish. It caused a dramatic drop in fish populations, notably the commercially important anchovy Engraulis encrasicholus (known locally as hamsi, hamsiya, hamsa, etc.), by competing for the same food sources and eating the young and eggs.[3] Biological control was tried with Beroe ovata, another comb jelly, with some degree of success; it appears as if a fairly stable predator-prey dynamic has been reached.[6]

In 1999 the species was introduced in the Caspian Sea. The result was that 75% of the zooplankton was depleted, thereby affecting the entire food chain of the lake.[citation needed]

Since then, the species has apparently spread throughout the Mediterranean basin and the northwestern Atlantic. In 2006, it was first recorded in the North Sea,[7] and since October 17, 2006[8] in the western Baltic Sea, namely the Kiel Fjord and The Belts. Up to 100 animals/m³ (c. 3/cubic ft) were counted in the Baltic, whereas the population density in the North Sea was at a much lower 4 animals/m³ (about 1 animal/9 cubic ft) at most.[3] 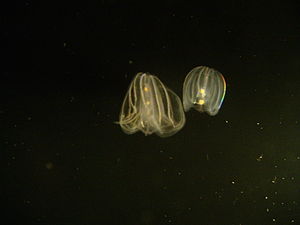 One year later, the Baltic population of M. leidyi was found to have spread east to the Gotland Basin and the Bay of Puck.[9] The impact of the species on the already heavily stressed Baltic ecosystem is unknown. The species overwinters in the deep waters where temperature does not drop below 4 °C (39 °F); the fact that the Baltic is heavily stratified, with the waters above and below the halocline mixing little, is believed to aid its survival.[3]

Apart from the widespread P. pileus, 3 comb jelly species are occasionally drifted into the Baltic from the North Sea but do not seem to be present as a stable population of significant size: Bolinopsis infundibulum, Beroe cucumis and Beroe gracilis. The second species might potentially be used for biological control.[2][3]

The route of dispersal of M. leidyi to the North Sea/Baltic region is unknown. It might have occurred naturally by drifting individuals, or with ballast water of ships, either from its natural range or from the Black Sea, via the Mediterranean and eastern Atlantic.[10] At least technically possible given the species' euryhaline habits is an alternate route of dispersal through continental Europe, being carried with ballast water in ships travelling from the Black Sea to the Rhine Estuary via the Rhine-Main-Danube Canal. The latter route is known to be the point of entry into continental Europe for numerous invasive freshwater neozoons from the Ponto-Caspian region, such as the zebra mussel, the quagga mussel, the amphipods Dikerogammarus villosus and Chelicorophium curvispinum, and the polychaete Hypania invalida.

Both the nuclear and mitochondrial genomes of Mnemiopsis leidyi have been sequenced, providing insight into the evolutionary position of Ctenophora (comb jellies).[11] [12] In the original 2013 paper reporting the nuclear genome sequence, phylogenetic analysis of the presence and absence of genes, introns, and amino acid alignments suggested that the comb jelly is the sister lineage to the rest of all animals.[11][13] However, a 2015 reanalysis identified several methodological issues with the original study, and consequently found that the analysis of gene presence absence data gave no support for Ctenophora as the sister group to all other animals, and analysis of amino acid alignments gave only mixed support for this hypothesis.[14]

Its mitochondrion shows several interesting features.[15] It is 10 kilobases in length making it the smallest animal mitochondrial DNA sequence known to date. It has lost at least 25 genes, including atp6 and all the tRNA genes. The atp6 gene has been relocated to the nuclear genome and has acquired introns and a mitochondrial targeting presequence. All tRNA genes have been genuinely lost along with nuclear-encoded mitochondrial aminoacyl tRNA synthetases. The mitochondrial rRNA molecules possess little similarity with their homologs in other organisms and have highly reduced secondary structures.

The genome of Mnemiopsis leidyi appears to lack recognizable microRNAs, as well as the nuclear proteins Drosha and Pasha, which are critical to canonical microRNA biogenesis. It is the only animal thus far reported to be missing Pasha. MicroRNAs play a vital role in the regulation of gene expression in all non-ctenophore animals investigated thus far except for Trichoplax adhaerens, the only known member of the phylum Placozoa.[16]