From Infogalactic: the planetary knowledge core
Jump to: navigation, search
For other uses, see Wat (disambiguation). 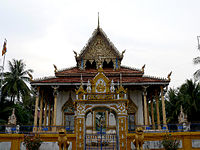 A wat (Thai: วัด wat Lao: ວັດ vad, Khmer: វត្ត wōat) is a buddhist-temple in Thailand, Cambodia or Laos. The term is borrowed from Pali vatta "which goes on or is customary, i. e. duty, service, custom, function".[1]

Strictly speaking a wat is a Buddhist sacred precinct with a vihara (quarters for bhikkhus), a temple, an edifice housing a large image of Buddha and a structure for lessons. A site without a minimum of three resident bhikkhus cannot correctly be described as a wat although the term is frequently used more loosely, even for ruins of ancient temples. As a transitive or intransitive verb, wat means to measure, to take measurements; compare templum, from which temple derives, having the same root as template.

In everyday language in Thailand, a wat is any place of worship except a mosque (Thai สุเหร่า surao or มัสยิด masjid; a mosque may also be described as โบสถ์ของอิสลาม - bot khong itsalam, literally "Islam church") or a synagogue (Thai สุเหร่ายิว - surao yiw). Thus a wat chin is a Chinese temple (either Buddhist or Taoist), wat khaek is a Hindu temple and wat khrit or wat farang is a Christian church, though Thai โบสถ์ (โบสถ์ bot) may be used descriptively as with mosques.

In Cambodia, a wat is used to refer to all kinds of places of worship. Technically, wat generally refers to a Buddhist place of worship, but the technical term is វត្តពុទ្ធសាសនា wat putthasasana. A Christian church can be referred as វិហារយេស៊ូ vihear Yesaou or "Jesus vihear". Angkor Wat អង្គរវត្ត means "city of temples". 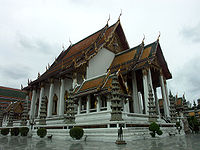 The facade to the Phra Viharn Luang (meeting hall) at Wat Suthat, one of the most important[according to whom?] Buddhist temples in Bangkok, Thailand

According to Thai law, Thai Buddhist temples are of two types:

A typical Buddhist wat consists of the following buildings:

The living quarters of the monks, including the กุฏิ (pronounced kut, kutti or kuti - monk cells) are separated from the sacred buildings.

The roofs of Thai temples are often adorned with chofas.

Some well-known wats include: