The species are floating annual aquatic plants, growing in slow-moving water up to 5 meters deep, native to warm temperate parts of Eurasia and Africa. They bear ornately shaped fruits, which in the case of T. bicornis resemble the head of a bull or the silhouette of a flying bat. Each fruit contains a single very large starchy seed. T. natans and T. bicornis have been cultivated in China and India for at least 3,000 years for the edible seeds.

The generic name Trapa is derived from the Latin word for "thistle," calcitrappa, as also is another common name for the water caltrop.

The Chinese name is língjiǎo (菱角), líng meaning "caltrop" and jiǎo meaning "horn." This is often rendered as ling nut by English-speakers.

The plant's name in Japanese is hishi, a word meaning "diamond or lozenge shaped".

The water caltrop's submerged stem reaches 12 to 15 ft (3.6 to 4.5 m) in length, anchored into the mud by very fine roots. It has two types of leaves, finely divided feather-like submerged leaves borne along the length of the stem, and undivided floating leaves borne in a rosette at the water's surface. The floating leaves have saw-tooth edges and are ovoid or triangular in shape, 2–3 cm long, on inflated petioles 5–9 cm long, which provide added buoyancy for the leafy portion. Four-petalled white flowers form in early summer and are insect-pollinated. The fruit is a nut with four 0.5 in (1 cm), barbed spines. Seeds can remain viable for up to 12 years, although most will germinate within the first two years.

The plant spreads by the rosettes and fruits detaching from the stem and floating to another area on currents or by fruits clinging to objects, and animals.

This plant should not be confused with the unrelated Eleocharis dulcis, also called a water chestnut. Eleocharis is also an aquatic plant raised for food since ancient times in China. Eleocharis dulcis is a sedge, whose round, crisp-fleshed corms are common in Western-style Chinese food.

The genus has an extensive fossil record, with numerous, distinctive species. Undisputed fossilized seeds have been found in Cenozoic strata starting from the Eocene throughout Europe, China and North America (though, the genus went extinct in North America prior to the Pleistocene).[1] The oldest known fossils attributed to the genus, however, are of leaves from Cretaceous Alaska, referred to the species, T. borealis[2] 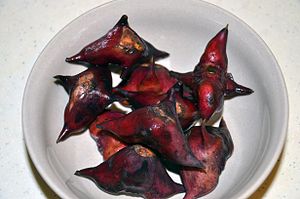 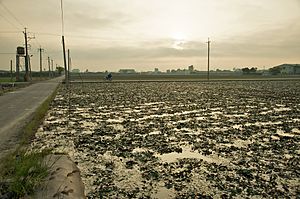 Investigations of archaeological material from southern Germany indicate that the prehistoric population of that region may well have relied significantly upon wild water chestnuts to supplement their normal diet and, in times of cultivated cereal crop failure, water chestnuts may even have been the main dietary component.[3] Today, water caltrop is so rare in Germany that it is listed as an endangered species.[4]

Water caltrop has been an important food for worship as prayer offerings since the Chinese Zhou Dynasty. The Rites of Zhou (2nd century BC) mentioned that a worshipper "should use a bamboo basket containing dried water caltrops, the seeds of Euryale ferox and chestnuts" (加籩之實，菱芡栗脯). The Chinese Herbal Medicine Summary (本草備要 published in 1694, written by Wang Ang 汪昂) indicates that water caltrop can help fever and drunkenness.

In India and Pakistan it is known as singhara or paniphal (eastern India) and is widely cultivated in fresh water lakes. The fruits are eaten raw or boiled. When the fruit has been dried, it is ground to a flour called singhare ka atta. Singhare ka atta is used in many religious rituals and can be consumed as a phalahar (fruit diet) on the Hindu fasting days, the navratas.[5]

It was possible to buy water chestnuts in markets all over Europe until 1880. In northern Italy the nuts were offered roasted, much as sweet chestnuts (Castanea sativa Mill.) are still sold today. In many parts of Europe water chestnuts were known and used for human food until the beginning of the 20th century. Today, however, it is a rare plant. There may be several reasons for its near extinction, such as climate fluctuations, changes in the nutrient content of water bodies, and the drainage of many wetlands, ponds and oxbow lakes.[3]

Trapa natans was introduced to Massachusetts around 1874 as a planting in the Harvard University Botanic Garden. Staff gardener Louis Guerineau took it upon himself to throw seeds into Fresh Pond and other Cambridge waterways. This came to the attention of Medford-based botanist George E. Davenport, who decided to bring seeds and live plants to his friend Minor Pratt, in Concord. He and Pratt seeded a pond near the Sudbury River, and he suspected Pratt conducted additional distributions. As early as 1879 there was a concern voiced by botanist Charles Sprague Sargent, Director of Boston's Arnold Arboretum, that this non-native species threatened to become a nuisance, based on dense growths reported in Cambridge. Davenport confessed in an entry in the Bulletin of the Torrey Botanical Club, Vol. 6, page 352: "I have several times had plants of Trapa natans that were collected in the vicinity of Boston, during the present year, brought to me for identification, and I have entertained no doubt as to the manner of its introduction into waters outside Cambridge Botanic Garden. But that so fine a plant as this, with its handsome leafy rosettes and edible nuts, which would, if common, be as attractive to boys as hickory nuts now are, can ever become a 'nuisance' I can scarcely believe."

This species has been declared invasive species from Vermont to Virginia.[6] They are also classified noxious weeds in Florida, North Carolina, and Washington.[7]

In Australia, and its state of New South Wales water caltrop has been declared a noxious weed.

Role in transmission of Fasciolopsiasis

Fasciolopsiasis can be transmitted via the surfaces of these and other water plants. During the metacercarial stage in their life cycle, the larval flukes leave their water snail hosts, and swim away to form cysts on the surfaces of water plants, including the leaves and fruit of water caltrops. If infected water plants are consumed raw or undercooked, the flukes can infect pigs, humans and other animals.

Fasciolopsiasis results from infection by the trematode Fasciolopsis buski (Lankester, 1857) Odhner, 1902, the largest intestinal fluke of humans (up to 7.5 cm in length)

Bicornin is an ellagitannin found in T. bicornis.[8]