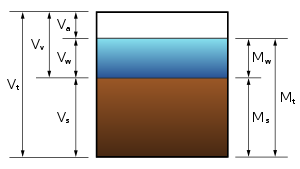 Soil composition by Volume and Mass, by phase: air, water, void (pores filled with water or air), soil, and total.

Water content or moisture content is the quantity of water contained in a material, such as soil (called soil moisture), rock, ceramics, fruit, or wood. Water content is used in a wide range of scientific and technical areas, and is expressed as a ratio, which can range from 0 (completely dry) to the value of the materials' porosity at saturation. It can be given on a volumetric or mass (gravimetric) basis.

is the volume of water and

Gravimetric water content[1] is expressed by mass (weight) as follows:

is the mass of water and

is the mass of the substance. Normally the latter is taken before drying:

except for woodworking, geotechnical and soil science applications where oven-dried material is used instead:

In soil mechanics and petroleum engineering, the term water saturation or degree of saturation,

is used, defined as

is the porosity and

is the volume of void or pore space. Values of Sw can range from 0 (dry) to 1 (saturated). In reality, Sw never reaches 0 or 1 - these are idealizations for engineering use.

) is a dimensionless value defined by van Genuchten[2] as:

is the saturated water content, which is equivalent to porosity,

Water content can be directly measured using a known volume of the material, and a drying oven. Volumetric water content, θ, is calculated[3] via the volume of water

and the mass of water

are the masses of the sample before and after drying in the oven;

is the density of water; and

For materials that change in volume with water content, such as coal, the water content, u, is expressed in terms of the mass of water per unit mass of the moist specimen:

For wood, the convention is to report moisture content on oven-dry basis (i.e. generally drying sample in an oven set at 105 deg Celsius for 24 hours). In wood drying, this is an important concept.

Other methods that determine water content of a sample include chemical titrations (for example the Karl Fischer titration), determining mass loss on heating (perhaps in the presence of an inert gas), or after freeze drying. In the food industry the Dean-Stark method is also commonly used.

From the Annual Book of ASTM (American Society for Testing and Materials) Standards, the total evaporable moisture content in Aggregate (C 566) can be calculated with the formula:

is the fraction of total evaporable moisture content of sample,

is the mass of the original sample, and

is mass of dried sample.

Satellite microwave remote sensing is used to estimate soil moisture based on the large contrast between the dielectric properties of wet and dry soil. The microwave radiation is not sensitive to atmospheric variables, and can penetrate through clouds. Also, microwave signal can penetrate, to a certain extent, the vegetation canopy and retrieve information from ground surface.[5] The data from microwave remote sensing satellite such as: WindSat, AMSR-E, RADARSAT, ERS-1-2, Metop/ASCAT are used to estimate surface soil moisture.[6]

Moisture may be present as adsorbed moisture at internal surfaces and as capillary condensed water in small pores. At low relative humidities, moisture consists mainly of adsorbed water. At higher relative humidities, liquid water becomes more and more important, depending or not depending on the pore size can also be an influence of volume. In wood-based materials, however, almost all water is adsorbed at humidities below 98% RH.

In biological applications there can also be a distinction between physisorbed water and "free" water — the physisorbed water being that closely associated with and relatively difficult to remove from a biological material. The method used to determine water content may affect whether water present in this form is accounted for. For a better indication of "free" and "bound" water, the water activity of a material should be considered.

Water molecules may also be present in materials closely associated with individual molecules, as "water of crystallization", or as water molecules which are static components of protein structure.

In soil science, hydrology and agricultural sciences, water content has an important role for groundwater recharge, agriculture, and soil chemistry. Many recent scientific research efforts have aimed toward a predictive-understanding of water content over space and time. Observations have revealed generally that spatial variance in water content tends to increase as overall wetness increases in semiarid regions, to decrease as overall wetness increases in humid regions, and to peak under intermediate wetness conditions in temperate regions .[7]

There are four standard water contents that are routinely measured and used, which are described in the following table:

And lastly the available water content, θa, which is equivalent to:

When a soil becomes too dry, plant transpiration drops because the water is increasingly bound to the soil particles by suction. Below the wilting point plants are no longer able to extract water. At this point they wilt and cease transpiring altogether. Conditions where soil is too dry to maintain reliable plant growth is referred to as agricultural drought, and is a particular focus of irrigation management. Such conditions are common in arid and semi-arid environments.

Some agriculture professionals are beginning to use environmental measurements such as soil moisture to schedule irrigation. This method is referred to as smart irrigation or soil cultivation.[citation needed]

In saturated groundwater aquifers, all available pore spaces are filled with water (volumetric water content = porosity). Above a capillary fringe, pore spaces have air in them too.

A water retention curve is the relationship between volumetric water content and the water potential of the porous medium. It is characteristic for different types of porous medium. Due to hysteresis, different wetting and drying curves may be distinguished.