Waverly is a town in Chambers and Lee counties in the U.S. state of Alabama. It is part of the Auburn Metropolitan Area. As of 2010, the town population was 145.[1]

Waverly has an operating post office, and three churches are located in the town.

Waverly was settled in the 1830s as "Pea Ridge" but saw little growth until the 1870s. In 1871, the Central of Georgia railroad was extended from Opelika to Dadeville. As planned, the railroad was to take a route roughly one mile (1.6 km) north of the town. However, topographical problems forced the railroad engineer to "waver" the route to the south, passing through Pea Ridge. The townspeople, appreciative of this "waver" which gave their community a rail connection, renamed the town "Waverly". However, some say the town was named for the Waverley Novels of Sir Walter Scott.

Beginning October 1990, and the second Saturday of each October since, the Town of Waverly hosts the Annual Waverly BBQ. Both pork and chicken BBQ, home made cakes and other sweets, cols, ice tea and lemonade are served. Town members all pitch in cooking, preparing the food,'stirring' the stew pot (a local tradition), and smoking the BBQ with hickory wood from the Friday night prior to the 'BBQ Day' at approximately 5:00pm, and continue this tradition until all the BBQ and stew is sold. Food is served to all attendees from 10:00am until 3:00pm. The event hosts singers, dancers, artists, arts and crafts, petting zoos, and other such events. This town get together serves as one of Waverly's largest fundraising events. 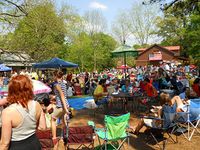 In 2000, the State of Alabama rerouted U.S. Highway 280 south of the town of Waverly instead of routing it through town. This decision meant the town was saved from destruction.[2] To celebrate, residents in 2001 decided to hold an annual "Waverly Boogie" (or "Old 280 Boogie"), a multi-cultural festival typically held on the third Saturday in April. The event, featuring a wide variety of musicians and visual artists, is held in an open-air amphitheater.[2]

There were 76 households out of which 28.9% had children under the age of 18 living with them, 52.6% were married couples living together, 11.8% had a female householder with no husband present, and 32.9% were non-families. 32.9% of all households were made up of individuals and 14.5% had someone living alone who was 65 years of age or older. The average household size was 2.42 and the average family size was 3.12.