We will bury you

From Infogalactic: the planetary knowledge core
Jump to: navigation, search
For other uses, see We will bury you (disambiguation). 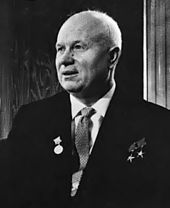 "We will bury you!" (Russian: "Мы вас похороним!", transliterated as My vas pokhoronim!) is a phrase that was used by Soviet premier Nikita Khrushchev while addressing Western ambassadors at a reception at the Polish embassy in Moscow on November 18, 1956.[1][2][3] The phrase was originally translated into English by Khrushchev's personal interpreter Viktor Sukhodrev.[4]

The actual verbal context was: "Whether you like it or not, history is on our side. We will dig you in" ("Нравится вам или нет, но история на нашей стороне. Мы вас закопаем"). In his subsequent public speech Khrushchev declared: "[...] We must take a shovel and dig a deep grave, and bury colonialism as deep as we can".[5] Later, on August 24, 1963, Khrushchev remarked in his speech in Yugoslavia, "I once said, 'We will bury you,' and I got into trouble with it. Of course we will not bury you with a shovel. Your own working class will bury you,"[6] a reference to the Marxist saying, "The proletariat is the undertaker of capitalism", based on the concluding statement in Chapter 1 of the Communist Manifesto: "What the bourgeoisie therefore produces, above all, are its own grave-diggers. Its fall and the victory of the proletariat are equally inevitable." Khrushchev repeated this Marxist thesis at a meeting with journalists in the US in September 1959. Many Americans interpreted the quote as a nuclear threat.[7]

Some authors suggest that an alternate translation is "We shall be present at your funeral" or "We shall outlive you".[8][9][10] Perhaps the closest translation into English in terms of sentiment would be the phrase, "It's your funeral."

Mikhail Gorbachev suggested in his book Perestroika and New Thinking for our Country and the World that the image used by Khrushchev was inspired by the acute discussions among Soviet agrarian scientists in the 1930s, nicknamed "who will dig whom in", the bitterness of which must be understood in the political context of the times.

Borrowings of the phrase

Khrushchev's phrase was used as the title of Jan Šejna's book on communist Cold War strategies and of a comics book. The phrase also appears in Sting's song "Russians". The quote, paraphrased as "We will bury them!", was used as a taunt in the video game Red Alert 2, in which the Soviet Union wages World War III against the Western Allies.