From Infogalactic: the planetary knowledge core
Jump to: navigation, search
For the specific meaning in Wikipedia, see Wikipedia:Weasel word. 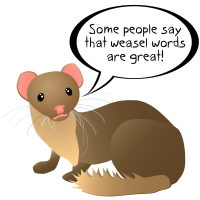 A weasel word (also, anonymous authority) is an informal term for words and phrases aimed at creating an impression that a specific and/or meaningful statement has been made, when only a vague or ambiguous claim has been communicated, enabling the specific meaning to be denied if the statement is challenged.

To tergiversate is synonymous with the use of weasel words to avoid making an outright assertion.[1] Weasel words can imply meaning far beyond the claim actually being made.[2] Some weasel words may also have the effect of softening the force of a potentially loaded or otherwise controversial statement through some form of understatement, for example using detensifiers such as "somewhat" or "in most respects".[3]

Weasel words can be used in advertising and in political statements, where causing the audience to develop a misleading impression of what was said can be advantageous, at least in the short term (in the longer term, systematic deception is likely to be identified, with a loss of trust in the speaker).

The expression weasel word may derive from the egg-eating habits of weasels.[4] An article published by the Buffalo News attributes the origin of the term to William Shakespeare's plays Henry V and As You Like It, in which the author includes similes of weasels sucking eggs.[5] The article also claims that this is a misnomer, because weasels do not have a mandible suitable for sucking eggs or blood.[6]

Ovid's Metamorphoses provide an earlier source for the same etymology. Ovid describes how Juno orders the goddess of childbirth, Lucina, to prevent Alcmene from giving birth to Hercules. Alcmene's servant Galanthis, realizing that Lucina is outside the labor room and is preventing the birth by magical means, emerges to announce that the birth has been a success. Lucina, in her amazement, drops the spells of binding and Hercules is born. Galanthis then mocks Lucina, who responds by transforming her into a weasel. Ovid writes (in A.S. Kline's translation) "And because her lying mouth helped in childbirth, she [as a weasel] gives birth through her mouth."[7]

Alternatively, definitions of the word 'weasel' include: n. a sneaky, untrustworthy, or insincere person; v. to manipulate shiftily,[8] both of which suggest deception. Finally, the phrase "to weasel out", meaning "to squeeze one's way out of something" or "to evade responsibility".[9]

The expression is first known to have appeared in Stewart Chaplin's short story "Stained Glass Political Platform" (published in 1900 in The Century Magazine),[10] in which they were referred to as "words that suck the life out of the words next to them, just as a weasel sucks the egg and leaves the shell". Theodore Roosevelt attributed the term to Dave Sewall, claiming that Sewall used the term in a private conversation in 1879.[11] Winston Churchill wrote: "The reserve of modern assertions is sometimes pushed to extremes, in which the fear of being contradicted leads the writer to strip himself of almost all sense and meaning." In another early usage (1916), Theodore Roosevelt argued that "one of our defects as a nation is a tendency to use ...'weasel words'; when one 'weasel word' is used ... after another there is nothing left".[12]

¹It is important that real examples do not explain, at a later stage of the argument, what exactly is meant by "it turns out that"; the whole needs to be looked at before it can be decided that it is a weasel term.

A 2009 study of Wikipedia found that most weasel words in it could be divided into three categories:[14]

Other forms of weasel words include:

Generalizing by means of quantifiers, such as many, when quantifiable measures could be provided, obfuscates the point being made, and if done deliberately is an example of "weaseling".

Non sequiturs, i.e., illogical or irrelevant statements can be used e.g., in advertising to make it appear that the statement describes a beneficial feature of a product or service being advertised. Endorsement of products by celebrities, regardless of whether they have any expertise relating to the product, is an example. I.e., it does not follow (non sequitur) that the endorsement provides any guarantee of quality or suitability.

Spurious authority: use of the passive voice without specifying an actor or agent (e.g., saying "it has been decided" without stating by whom), and citation of unidentified "authorities" or "experts" provide further scope for weaseling. It can be used in combination with the reverse approach of discrediting a contrary viewpoint by glossing it as "claimed" or "alleged". This embraces what is termed a "semantic cop-out", represented by the term allegedly.[15] This implies an absence of ownership of opinion, which casts a limited doubt on the opinion being articulated. The construction "mistakes were made" enables the speaker to acknowledge error without identifying those responsible.

However the passive voice is legitimately used when the identity of the actor or agent is irrelevant. For example, in the sentence "one hundred votes are required to pass the bill", there is no ambiguity, and the actors (i.e. the members of the voting community) cannot practicably be named even if it were useful to do so.[16][17]

The scientific journal article is another example of the legitimate use of the passive voice. For an experimental result to be useful, anyone who runs the experiment should get the same result. That is, the identity of the experimenter should be of low importance. Use of the passive voice focuses attention upon the actions, and not the actor (the author(s) of the article). To achieve conciseness and clarity, however, most scientific journals encourage author(s) to use the active voice where approporiate, identifying themselves as "we" (or even "I")[18]

The middle voice can be used to create a misleading impression, e.g.:

The first of these also demonstrates spurious authority, in that anyone who disagrees incurs the suspicion of being unreasonable merely by dissenting. Another example from international politics is use of the phrase "the international community" to imply a spurious unanimity.

Euphemism may be used to soften and potentially mislead the audience, e.g. "rightsizing" a workforce normally meaning dismissing employees. Other euphemisms commonly used in this area include "headcount reduction" and "downsizing".[19] Jargon of this kind is used to describe things euphemistically.

Restricting information available to the audience is a technique sometimes used in advertisements. e.g., stating that a product "... is now 20% cheaper!" raises the question, "Cheaper than what?". It might be said that "Four out of five people prefer ..." something, but this raises the questions of the size and selection of the sample, and the size of the majority (8% for, 2% against and 90% indifferent would be "four out of five" of those who expressed an opinion).

In Report on Unidentified Flying Objects (1956), U.S. Air Force Captain Edward J. Ruppelt described astronomer Dr. J. Allen Hynek's report on the death of pilot Thomas Mantell in pursuit of a UFO as "a masterpiece in the art of 'weasel wording'."[20]

Carl Wrighter discussed weasel words in his best-selling book I Can Sell You Anything (1972).

Australian author Don Watson devoted two volumes (Death Sentence and Watson's Dictionary of Weasel Words) to documenting the increasing use of weasel words in government and corporate language. He maintains a website[21] encouraging people to identify and nominate examples of weasel words.

Scott Adams, the creator of the Dilbert comic strip, talks much about 'weasels' (conniving business people) in one of his books, named accordingly: Dilbert and the Way of the Weasel (2002).