The letter j was only relatively recently accepted into Welsh orthography for those words borrowed from English in which the /dʒ/ sound is retained in Welsh, even where that sound is not represented by j in English spelling, as in garej ("garage") and ffrij ("fridge"). Older borrowings of English words containing /dʒ/ resulted in the sound being pronounced and spelt in various other ways, resulting in occasional doublets such as Siapan and Japan ("Japan").

The letters k, q, v, x and z are sometimes used in technical terms, like kilogram, volt, xeroser and zero, but in all cases can be, and often are, replaced by Welsh letters: cilogram, folt, seroser and sero.[2] Nevertheless, in the Welsh colony in Patagonia, v is used generally to represent the sound /v/.[3] 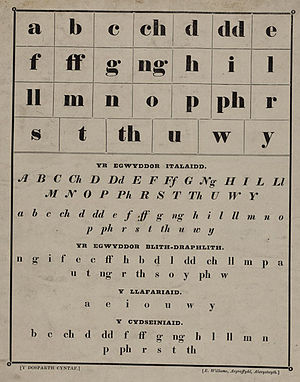 The earliest samples of written Welsh date from the 6th century and are in the Latin alphabet (see Old Welsh). The orthography differs from that of modern Welsh particularly in the use of p, t and c to represent the voiced plosives /b, d, ɡ/ in the middle and at the end of words. Similarly, the voiced fricatives /v, ð/ were written with b and d.[3]

By the Middle Welsh period, this had given way to much variability: although b, d and g were now used to represent /b, d, ɡ/, these sounds were also often written as in Old Welsh, while /v/ could be denoted by u, v, f or w. In earlier manuscripts, moreover, fricatives were often not distinguished from plosives (e.g. t for /θ/, the sound now written with th).[4] The grapheme k was also used more commonly than in the modern alphabet, particularly before front vowels.[3] The disuse of this letter is at least partly due to the publication of William Morgan's Welsh Bible, whose English printers, with type letter frequencies set for English and Latin, did not have enough k letters in their type cases to spell every /k/ sound as k, so the order went "C for K, because the printers have not so many as the Welsh requireth";[5] this was not liked at the time, but has become standard usage.

In 1928 a committee chaired by Sir John Morris-Jones standardised the orthography of modern Welsh.

In 1987, a committee chaired by Professor Stephen J. Williams made further small changes. The conventions established by these committees are not adhered to by all modern writers.[6]

"N" and "S" indicate variants specific to the northern and southern dialects of Welsh. Throughout Wales an alternative system is also in use in which all consonant letters are named using the corresponding consonant sound plus a schwa (e.g. cy /kə/ for èc). In this system the vowels are named as below.

Welsh makes use of a number of diacritics.

The circumflex (ˆ) is used to mark long vowels, so â, ê, î, ô, û, ŵ, ŷ are always long. However, not all long vowels are marked with a circumflex, so the letters a, e, i, o, u, w, y with no circumflex do not necessarily represent short vowels; see "Predicting vowel length from orthography" below.

The grave accent (`) is sometimes used, usually in words borrowed from another language, to mark vowels that are short when a long vowel would normally be expected, e.g. pas /pɑːs/ (a cough), pàs /pas/ (a pass/permit or a lift in a car); mwg /muːɡ/ (smoke), mẁg /mʊɡ/ (a mug).

The acute accent (´) is sometimes used to mark a stressed final syllable in a polysyllabic word. Thus the words gwacáu (to empty) and dicléin (decline) have final stress. However, not all polysyllabic words with final stress are marked with the acute accent (Cymraeg "Welsh", for example, is written with none). The acute may also be used to indicate that a letter w represents a vowel where a glide might otherwise be expected, e.g. gẃraidd /ˈɡʊ.raið/ (two syllables) "manly", as opposed to gwraidd /ˈɡwraið/ (one syllable) "root". Similarly, the diaeresis (¨) is used to indicate that two adjoining vowels are to be pronounced separately, e.g. copïo (to copy) pronounced /kɔˈpiːɔ/, not */ˈkɔpjɔ/.

The grave and acute accents in particular are very often omitted in casual writing, and the same is true to a lesser extent of the diaeresis. The circumflex, however, is usually included. Accented vowels are not considered distinct letters for the purpose of collation.

As mentioned above, vowels marked with the circumflex are always long, and those marked with the grave accent are always short. If a vowel is not marked with a diacritic, its length must be determined by its environment; the rules vary a bit according to dialect.[7][8]

An unmarked (stressed) vowel is long:

An unmarked vowel is short:

In Northern dialects, long vowels must not only be stressed, they must also appear in the final syllable of the word. Vowels in non-final syllables are always short. In addition to the rules above, a vowel is long in the North before a consonant cluster beginning with s, e.g. tyst /tɨːst/ (witness). Before ll, a vowel is short when no consonant follows the ll, e.g. gwell (better) /ɡwɛɬ/, but long when another consonant does follow the ll, e.g. gwallt /ɡwɑːɬt/ (hair).

While the digraphs ch, dd, ff, ng, ll, ph, rh, th are each written with two symbols, they are all considered to be single letters. This means, for example that Llanelli (a town in South Wales) is considered to have only six letters in Welsh, compared to eight letters in English. Consequently, they each take up only a single space in Welsh crosswords.

Sorting is done in correspondence with the alphabet. For example, la comes before ly, which comes before lla, which comes before ma. Automated sorting may occasionally be complicated by the fact that additional information may be needed to distinguish a genuine digraph from a juxtaposition of letters; for example llom comes after llong (in which the ng stands for /ŋ/) but before llongyfarch (in which n and g are pronounced separately as /ŋɡ/).

Although the digraphs above are considered to be single letters, only their first component letter is capitalised when a word in lower case requires an initial capital letter. Thus:

The two letters in a digraph are both capitalised only when the whole word is in uppercase:

The status of the digraphs as single letters is reflected in the stylised forms used in the logos of the National Library of Wales (logo) and Cardiff University (logo).