The phonology of Welsh is characterised by a number of sounds that do not occur in English and are typologically rare in European languages, such as the voiceless alveolar lateral fricative [ɬ] and several voiceless sonorants (nasals and liquids), some of which result from consonant mutation. Stress usually falls on the penultimate syllable in polysyllabic words, while the word-final unstressed syllable receives a higher pitch than the stressed syllable.

Welsh has the following consonant phonemes:[1]

Symbols in parentheses are either allophones, or found only in loanwords. The sound /z/ generally occurs in loanwords, e.g. sw /zuː/ ('zoo'), although this is usually realised as /s/ in northern accents, e.g. /suː/. The postalveolar affricates /tʃ/ and /dʒ/ occur mainly in loanwords, e.g. tships /tʃɪps/ ('chips') and jeli /ˈdʒɛli/ ('jelly'), but also in some dialects as developments from /tj/ and /dj/, e.g. /dʒaul/ from diafol /ˈdjavɔl/ ('devil'). The voiceless nasals /m̥ n̥ ŋ̊/ occur mostly word-initially, as a consequence of nasal mutation. Initial /χw/ (or /χʷ/) is colloquially realised as [ʍ] in the south, e.g. chwech /χweːχ/ ('six') pronounced [ʍeːχ].

The stops /p t k/ are distinguished from /b d ɡ/ by means of aspiration more consistently than by voicing, as /b d ɡ/ are actually devoiced in most contexts. This devoiced nature is recognised in the spelling of /sp sk/ as ⟨sb sg⟩, although /st/ is orthographically ⟨st⟩ for historical reasons.

The fricatives /v ð/ may also be devoiced in some contexts, but are distinguished from /f θ/ by having a shorter frication length than the latter. There is a tendency in the spoken language not to pronounce these voiced fricatives in certain contexts, e.g. nesaf /nɛsav/ ('next') realised as /ˈnɛsa/ or i fyny /iː ˈvənɨ/ ('up') from mynydd /mənɨ̞ð/ ('mountain'). Historically, this occurred so often with the voiced uvular fricative that it disappeared entirely from the language. Some speakers realise the voiceless lateral fricative /ɬ/ as an voiceless palatal fricative [ç] in some or all contexts.[2] The occurrence and distribution of the phoneme /ʃ/ varies from area to area. Very few native words are pronounced with /ʃ/ by all speakers, e.g. siarad /ˈʃarad/ ('talk'), although it appears in borrowings, e.g. siop /ʃɔp/ ('shop'). In northern accents, it can occur when /s/ precedes /iː j/ or /j/, e.g. mi es i /mi ˈeːʃ iː/ ('I went'). In some southern dialects it is produced when /s/ follows /ɪ/ or /iː/, e.g. mis /miːʃ/ ('month'). The voiceless fricative /χ/ is realised as uvular except by some southwestern speakers, who produce the sound in the velar region.

The /r/ phoneme is reportedly pronounced as a voiced uvular fricative by some speakers in Dyfed and Gwynedd, in a pronunciation known as tafod tew ('thick tongue').[3]

In northern Welsh, the alveolar lateral approximant is consistently velarised or "dark" in all positions, but remains unvelarised or "clear" in the south. 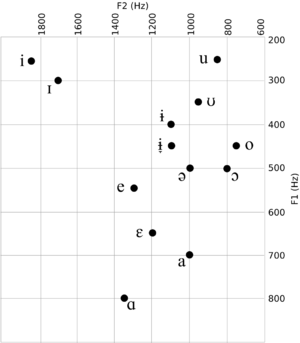 A chart plotting the vowel formants of a Welsh speaker from Bangor.[4]

The vowel phonemes of Welsh are as follows:[1]

The diphthongs containing /ɨ/ occur only in Northern dialects; in Southern dialects /ʊɨ/ is replaced by /ʊi/, /ɨu, əɨ~ɛɨ, ɔɨ/ are merged with /ɪu, əi~ɛi, ɔi/, and /aɨ, ɑːɨ/ are merged with /ai/. There is a general tendency in the South to simplify diphthongs in everyday speech, e.g. Northern /ɡwɑːɨθ/ corresponding to /ɡwaːθ/ in the South, or Northern /ɡwɛiθjɔ/ and Southern /ɡwiθɔ/.

Stress in polysyllabic words occurs most commonly on the penultimate syllable, more rarely on the final syllable (e.g. verbs ending in -áu).[5] Exceptions can arise in relation to borrowings from foreign words, such as ambiwlans and testament, and words with an epenthetic echo vowel such as cenedl /ˈkɛnɛdɛl/. According to its positioning, related words or concepts (or even plurals) can sound quite different, as syllables are added to the end of a word and the stress moves correspondingly, e.g.: