Karl Rudolf Werner Braune[3] (11 April 1909 in Mehrstedt, Thuringia − 7 June 1951 in Landsberg Prison, Landsberg am Lech, Bavaria) was a German member of the Nazi police and military organization known as the Schutzstaffel, or, more commonly, by its German initials, SS. He held the rank of Obersturmbannführer. During the course of the Nazi invasion of the Soviet Union, which began on 22 June 1941, Braune was the commander of Special Detachment (German: Sonderkommando or Einsatzkommando) 11b, which was in turn part of a Special Purpose Unit D. This unit, and three others similarly organized, have since come to be known by their German name of Einsatzgruppen. As commander of Special Detachment 11b, Braune organized and conducted mass murders of Jews in German-occupied areas of southern Ukraine and in the Crimea. For his role in these crimes, Braune was tried before the Nuremberg Military Tribunal in 1948 in the Einsatzgruppen trial. He was sentenced to death, and in 1951 was executed by hanging.

Braune attended a type of German school known as a Gymnasium and graduated in 1929 with a prestigious diploma known as an abitur.[4] He then studied jurisprudence at the universities of Jena, Bonn, and Munich. He graduated in 1933 with a degree in civil law from the University of Jena.[5] On July 1, 1931, at the age of 22, and while still a student, Braune joined the Nazi party and was assigned membership number 581,277.[6]

In November 1931, Braune became a member of the Nazi paramilitary organization known as the Sturmabteilung, sometimes called "stormtroopers" in English, and which is generally referred to by its German initials of SA. In November 1934, he joined the SS and was assigned membership number 107,364. At the same time in 1934 Braune began working at the German police organization called the Security Service (Sicherheitsdienst), known by its German initials as the SD. In 1936, Braune was also working for another police organization, the Gestapo.[7] In 1938 he became acting Gestapo leader in Münster. In 1940, he became a Gestapo boss, first in Koblenz, next in the state police office in Wesermünde and then, in May 1941, in Halle.[8]

From October 1941 to the beginning of September 1942, Braune was the commander of Special Detachment 11b, part of Einsatzgruppen D, which was under the command of Otto Ohlendorf, who later would be executed as a war criminal. Werner Braune's younger brother Fritz Braune (18 July 1910- after 1973) was the commander of Special Detachment 4b. Under the command of Werner Braune, Special Detachment 11b carried out the massacre of Simferopol, in the Crimea, where in the course of the three days from 11 to 13 December 1941 they murdered 14,300 Jews. In September 1942 Braune returned to Halle. In 1943 he was promoted to the rank of SS Obersturmbannführer (lieutenant colonel). From 1943 through 1944, he was the leader of the German Foreign Service Academy, until, in 1945, he was sent to Norway as the commander of the Security Police ("Sicherheitspolizei" or SiPO) and SD.[8] 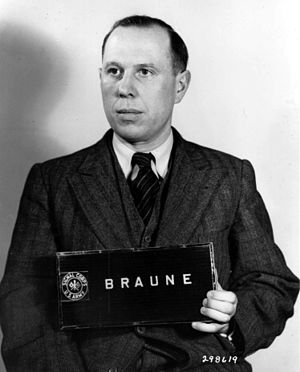 Following the war, Braune was indicted as a war criminal in the Einsatzgruppen trial that was held before the Nuremberg Military Tribunal. Braune's only defense was that he was acting under superior orders, sometimes referred to as the "Nuremberg defense". This was rejected by the court:

In October 1941 he was assigned to Einsatzkommando 11b. As chief of this unit Braune knew of the Fuehrer Order and executed it to the hilt. His defense is the general one of superior orders which avails Braune no more than it does anyone else who executes a criminal order with the zeal that Braune brought to the Fuehrer Order. Various reports implicate Braune and his Kommando in the sordid business of illegal killings.

The Tribunal has already spoken of the Christmas massacre of Simferopol. Braune was the Kommando leader in charge of this operation. He has admitted responsibility for this murder in unequivocal language.[9]

On 10 April 1948 Braune was sentenced to death and shortly after midnight on 7 June 1951 he was executed by hanging at the Landsberg war criminals prison.[1] Also hanged on 7 June 1951 at Landsberg prison were six other Nazi war criminals including Otto Ohlendorf, Erich Naumann, Paul Blobel and Oswald Pohl.[1][2]