Fritsch was born in Benrath in the Rhine Province of the German Empire. He entered the Imperial German Army (Reichsheer) at the age of 18, and won the attention of the German General Staff with his superior military qualities. In 1901, at the age of 21, he transferred to the Prussian Military Academy (Preußische Kriegsakademie). As a First Lieutenant (Oberleutnant) in 1911, he was appointed to the General Staff. During World War I, he gradually increased in importance and received, among other awards, the Iron Cross First Class and a black wound badge for a head wound he received while visiting the front lines.

During the interwar period, Fritsch served in the Weimar Republic's Armed Forces (Reichswehr). In 1924, Fritsch wrote a letter to Joachim von Stülpnagel where he expressed his hatred of democracy and his hope that General Hans von Seeckt would carry out a putsch to establish a military dictatorship.[1] Fritsch declared he was totally opposed to seeing another "black, red and gold cur" as Chancellor and wrote that he believed that Germany was being ruined by "the propaganda of the Jewish papers".[1] Fritsch ended his letter with a list of all whom he hated:

"For in the last resort Ebert, pacifists, Jews, democrats, black, red, and gold, and the French are all the same thing, namely the people who want to destroy Germany. There may be small differences, but in the end it all amounts to the same."[1]

The German historian Wolfram Wette wrote that Fritsch had come close to high treason with his letter as Fritsch had taken the Reichswehreid oath to defend democracy, and in calling for a putsch to destroy the democracy that Fritsch had taken an oath to defend was an act of "...extreme disloyalty to the republic to which he had sworn an oath".[1] Fritsch was heavily involved in the secret rearmament of the 1920s, in which Germany sought to evade the terms of Part V of the Treaty of Versailles, which had essentially disarmed Germany, limiting the country's Army to 100,000 soldiers, plus destroying all its aircraft and tanks.[2] As such, Fritsch who worked closely with the Soviet Union in secret rearmament favored a pro-Soviet foreign policy, and had an extreme hatred for Poland.[2] In 1928, Fritsch began work on the plan that became Fall Weiss, the invasion of Poland in 1939.[2] He was promoted to Major-General (Generalmajor) in 1932 by Kurt von Schleicher, who regarded him as a promising young officer.[3] Schleicher then assigned Fritsch and Gerd von Rundstedt the duty of carrying out the Prussian coup that saw the Reichswehr oust the Social Democratic government of Prussia.[2]

After the Nazis came to power in 1933, Fritsch was a warm supporter of the new regime, which he saw as a radical force that, provided it was influenced by people like himself, would be a force for the good.[4] Wette wrote that as Fritsch was a member of "...group of hardened anti-Semitics" in the officer corps, the anti-Semitism of Adolf Hitler was one of Fritsch's most important reasons for supporting the Nazi regime.[5] Fritsch was promoted to Commander-in-Chief of the Army (Oberkommando des Heeres, or OKH), in February 1934 partly because Hitler saw him as a supporter of his regime and partly because the Defence Minister Werner von Blomberg valued Fritsch for his professionalism.[6] In February 1934, when Blomberg ordered that all soldiers who might be considered Jewish (that is, had at least Jewish parent or grandparent who converted; long before the Nazis, the Reichswehr did not accept Jews) be given dishonorable discharges, Fritsch made no objection and carried out the order.[7] According to William Shirer in The Rise and Fall of the Third Reich, Fritsch played a pivotal role when he balked at Hitler's initial overture to the Army to succeed ailing President von Hindenburg upon his death. Fritsch ultimately betrayed the officer corps to the Führer by agreeing to this demand after consulting with his generals.[8] On 31 December 1934 Fritsch announced that it "goes without saying that an officer [should seek] a wife only within Aryan circles" and that any officer who married a Jewish woman would be dishonorably discharged at once.[5] He was named Commander-in-Chief of the Army in 1935. In late 1934-early 1935, Fritsch and Blomberg successfully pressured Hitler into rehabilitating the name of the assassinated General von Schleicher, claiming that as officers they could not stand the press attacks portraying him as a traitor working for France.[9]

Fritsch supported the Nazi regime but he was antagonistic towards attempts to create rivals to the Army. In particular, he grew increasingly hostile toward the SS, which he saw as a rival to the Army. Shirer recalled hearing Fritsch make sarcastic remarks about the SS, as well as several Nazi leaders from Hitler on down, at a parade in Saarbrücken. He was also worried that Hitler would cause a war with the Soviet Union; like most of his fellow officers, he had supported the Weimar liaison with Moscow. Wette wrote that "It is indisputable that the conservative and nationalistically minded General von Fritsch affirmed the National Socialist state, and he accepted Hitler as a dictator fully and completely. Given this compatibility of outlook, one may doubt whether Fritsch's pronounced anti-Semitism reflected "political naïveté" as the historian Klaus-Jürgen Müller has asserted".[10]

In 1936, when Blomberg was promoted to Field Marshal, Fritsch received promotion to Blomberg's vacated rank of Colonel General (Generaloberst). Fritsch was among the officers present at the Hossbach Conference in 1937 where Hitler announced that he wanted to go to war as early as 1938. He was very critical of this demand, as he knew the army was not ready.

Heinrich Himmler and Hermann Göring—inspired by the resignation of Blomberg—accused the unmarried Fritsch of engaging in homosexual activity. Fritsch had never been a womaniser and had preferred to concentrate on his army career. He was forced to resign on 4 February 1938. His replacement—Walther von Brauchitsch—was recommended for the post by Fritsch. Adolf Hitler took advantage of the situation through the replacement of several generals and ministers with Nazi loyalists, which strengthened his control of the German Armed Forces (Wehrmacht). It soon became known that the charges were false, and an honour court of officers examined the Blomberg-Fritsch Affair, although it was presided over by Göring himself. The successful annexation of Austria into Greater Germany (Anschluss) of 12 March silenced all critics of Hitler, Göring and Himmler. Fritsch was acquitted on 18 March, but the damage to his name had been done.

Following his acquittal, Fritsch attempted to challenge SS leader Heinrich Himmler to a duel. Fritsch composed a formal challenge and reportedly practiced his pistol skills in his free time, of which he had plenty as an officer without a command. The letter was given to General Gerd von Rundstedt for delivery, but Rundstedt, seeking to bridge the distrust between the Wehrmacht and SS, ultimately convinced Fritsch to abandon the idea. (It is unlikely the encounter could have come about regardless, as Hitler had forbidden highly placed party members, such as Himmler, from dueling.)[11]

Despite the false charges, Fritsch remained loyal to the Nazi regime, and maintained his firmly held belief Germany was faced with an international Jewish conspiracy out to ruin the Reich.[12] After the Kristallnacht pogrom of November 1938, Fritsch wrote in a letter to a friend on 22 November 1938 that "Of course the battle with international Jewry has now officially begun, and as a natural consequence that will lead to war with England and the United States, the political bastions of the Jews".[13] In another letter to his friend, the Baroness von Schutzbar on 11 December 1938 Fritsch wrote:

"It is very strange that so many people should regard the future with growing apprehension, in spite of the Führer's indisputable successes in the past...Soon after the War, I came to the conclusion that we have to be victorious in three battles, if Germany were again to be powerful:.

(1) The battle against the working class. Hitler has won this;

(2) Against the Catholic Church, perhaps better expressed as Ultramontanism and

We are in the midst of these battles, and the one against the Jews is the most difficult. I hope everyone realizes the intricacies of this campaign."[14]

Fritsch told Ulrich von Hassell—when the latter tried to involve him in an anti-Nazi plot—that Hitler was Germany's destiny, and nothing could be done to change that fact.[15] 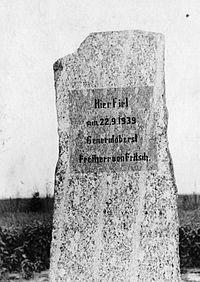 Commemorative stone placed by Germans in the spot where Werner Freiherr von Fritsch died. It was destroyed in 1944 during the Warsaw Uprising. 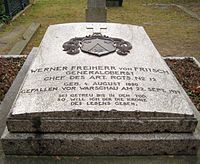 Grave at Invalidenfriedhof.
Lua error in Module:Coordinates at line 668: callParserFunction: function "#coordinates" was not found.

Just before the outbreak of World War II, Fritsch was recalled, and chose to personally inspect the front lines as the "Honorary Colonel of the 12th Artillery Regiment"[16] during the Invasion of Poland, a very unusual activity for someone of his rank. On 22 September 1939, in Praga during the Siege of Warsaw, a Polish bullet (either a machine gun or a sharpshooter) tore an artery in his leg.[17] Lieutenant Rosenhagen, adjutant to Fritsch and an eyewitness to his death, wrote in his original, official report:

Werner von Fritsch was the second German general to be killed in combat in World War II—the first being Generalmajor der Ordnungspolizei and SS Brigadeführer Wilhelm Fritz von Roettig (KIA on 10 September 1939 (around 14:15) near Opoczno, Poland). As Fritsch was the second general to be killed in action, the event was closely examined. The official verdict was that he deliberately sought death. Fritsch received a ceremonial state funeral four days later in Berlin.

"They buried General von Fritsch here this morning. It rained, it was cold and dark – one of the dreariest days I can remember in Berlin. Hitler did not show up, nor Ribbentrop, nor Himmler, though they all returned to Berlin from the front this afternoon."

The "Freiherr von Fritsch Kaserne" (barracks) in Darmstadt was named after Fritsch after his death. The facilities were combined with the adjoining Cambrai Kaserne when the United States Army occupied Darmstadt in 1945. The Cambrai-Fritsch Kaserne was scheduled to be turned over to the German government before March 2009,[18] and was returned to German governance on 6 August 2008.[19]

Regarding personal names: Freiherr was a title before 1919, but now is regarded as part of the surname. It is translated as Baron. Before the August 1919 abolition of nobility as a legal class, titles preceded the full name when given (Graf Helmuth James von Moltke). Since 1919, these titles, along with any nobiliary prefix (von, zu, etc.), can be used, but are regarded as a dependent part of the surname, and thus come after any given names (Helmuth James Graf von Moltke). Titles and all dependent parts of surnames are ignored in alphabetical sorting. The feminine forms are Freifrau and Freiin.