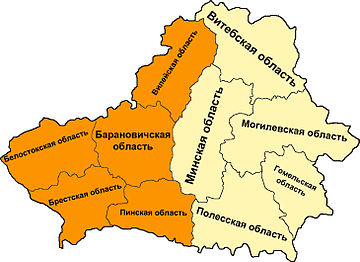 Administrative division of the Byelorussian SSR in 1939-1944. Territory of West Belarus annexed from occupied Poland on the basis of Soviet-Nazi treaties marked in orange 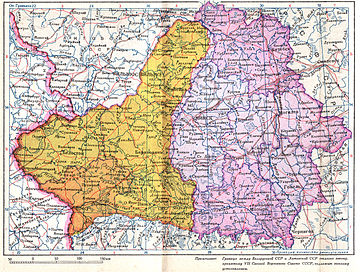 West Belarus (Belarusian: Заходняя Беларусь, Zachodniaja Bielaruś) is the name used in reference to the territory of modern Belarus which belonged to the Second Polish Republic between 1919 and 1939. Since the dissolution of the Soviet Union in 1991, the area, ceded to the USSR in 1945, belongs to the sovereign Republic of Belarus.[1]

The territory forming today's western part of Belarus include in particular, Hrodna and Brest voblasts, as well as parts of today's Minsk and Vitsebsk oblasts. The historical population of West Belarus included Belarusians, Poles, Lithuanians, Jews, and Russians. Many peasants in Polesia (the Poleszuks) used to declare themselves as simply Local people (Tutejszy), or Orthodox, rather than Belarusians (also see: Belarusian minority in Poland).

Pursuant to the Treaty of Riga signed in March 1921 between Poland, Soviet Russia (on behalf of Soviet Byelorussia) and the Soviet Ukraine (thus ending the Polish-Soviet War), the territories of modern-day sovereign state of Belarus (part of the Russian Empire) were divided between Poland and the Russian Soviet Federative Socialist Republic. The area that became part of Poland formed the central part of Kresy macroregion. The new borders established between the two countries remained in force throughout the interwar period, up until the outbreak of World War II following the 17 September 1939 Soviet invasion of Poland. They were later redrawn during the Yalta Conference and Potsdam Conference. In Soviet times, the occupied territory was called West Belarus as opposed to East Belarus.

Thousands of Poles settled in the area in the years that followed the Peace of Riga.[2] In the elections of November 1922, a Belarusian party (in the Blok Mniejszości Narodowych coalition) obtained 14 seats in the Polish parliament (11 of them in the lower chamber, Sejm).[1] In the spring of 1923, Polish prime minister Władysław Sikorski ordered a report on the situation of the Belarusian minority in Poland. That summer, a new regulation was passed allowing for the Belarusian language to be used officially both in courts and in schools. Obligatory teaching of the Belarusian language was introduced in all Polish gymnasia in areas inhabited by Belarusians in 1927.[2]

Compared to the (larger) Ukrainian minority living in Poland, Belarusians were much less politically aware and active. The largest Belarusian political organization, the Belarusian Peasants' and Workers' Union Hramada, received logistical help from the Soviet emissaries,[3] and financial aid from the Comintern.[4] By 1927 Hramada was controlled entirely by agents from Moscow.[3] It was banned by the Polish authorities,[3] and further opposition to the Polish government was met with state-imposed sanctions once the connection between Hramada and the Soviet Communist Party of Western Belarus was discovered.[3]

Tensions between increasingly nationalistic Polish government and various increasingly separatist ethnic minority groups continued to grow, and the Belarusian minority was no exception. In East Belarus between 1937 and 1938, the Soviet NKVD and the Communist Party made an attempt to exterminate Poles as an ethnic group entirely. The Polish minority there was almost completely annihilated in waves of prison executions, wrote Professor Bogdan Musial.[5] In the course of the largest ethnic shooting-and-deportation action of the Great Terror called the Polish Operation which took place approximately from August 25, 1937 to November 15, 1938 some 111,091 Polish males were murdered by troykas in cold blood.[5][6] 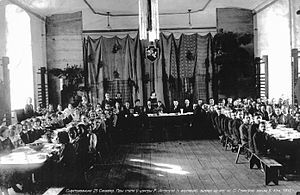 The Soviets were also constantly trying to escalate the ethnic divisions by promoting the Soviet-controlled East Belarus as formally autonomous in order to attract sympathies of Belarusians living in Poland. This image was attractive to many West Belarusian national leaders and some of them, like Francišak Alachnovič or Uładzimir Žyłka emigrated from Poland to East Belarus, but very soon became victims of Soviet repressions. The Soviet invasion of Poland in 1939 was portrayed by Soviet propaganda as the "liberation of West Belarus and Ukraine". Some Belarusians welcomed unification with the Belorussian SSR, although attitudes of many changed after experiencing the Soviet terror. From 1939 on, with the exception of a brief period of Nazi occupation, almost all Belarusians previously living in Poland would live in the Belorussian SSR.[7][8]

Soon after the Nazi-Soviet Invasion of Poland in September of 1939, the area of West Belarus was annexed into the Belarusian Soviet Socialist Republic following staged elections decided by the NKVD in the atmosphere of complete terror.[9] The citizens were told repeatedly that the deportations to Siberia were imminent. Their ballot envelopes were numbered so as to remain traceable.[9]

Annexation of West Belarus by the USSR

The Soviet occupational administration organized their elections into a National assembly of West Belarus (Belarusian: Народны сход Заходняй Беларусі) on October 22, 1939, less than two weeks after the invasion. The so-called Elections to the People's Assemblies of Western Ukraine and Western Belarus took place under total control of the NKVD secret police and the Party agents from Russia. At times, the Belarusian civilians extracted from homes were brought to the voting halls under armed escorts. Their envelopes were numbered and oftentimes already sealed.[9] On October 30, the National Assembly session held in Belastok passed the decision of West Belarus joining the USSR and its unification with the Belarusian Soviet Socialist Republic. These petitions were officially accepted by the Supreme Soviet of the USSR on November 2 and by the Supreme Soviet of the BSSR on November 12.[10]

However, the Soviet rule was short-lived. The corresponding terms of the Molotov–Ribbentrop Pact signed earlier in Moscow were broken, when the German Army entered the Soviet occupation zone on June 22, 1941. Poland was no longer divided between the Soviet Union and Germany (see German invasion of Poland and Soviet invasion of Poland) after Operation Barbarossa. Two years later, at the insistence of Joseph Stalin during the Tehran Conference of 1943, most of West Belarus was formally ceded by the Allies to the Belorussian SSR following the end of World War II in Europe. Only the region around Białystok (Belostok) was returned to Poland.

The Polish population was soon forcibly resettled.[1] West Belarus in its entirety was incorporated into the Byelorussian SSR (BSSR). It was initially planned to move the capital of the Byelorussian SSR to Vilnius. However, the same year Joseph Stalin ordered that the city and surrounding region be transferred to Lithuania, which some months later was annexed by the Soviet Union and became a new Soviet Republic. Minsk therefore was proclaimed the capital of the enlarged BSSR. The borders of the BSSR were again altered somewhat after the war (notably the area around the city of Białystok (Belastok Voblast) was returned to Poland) but in general they coincide with the borders of the modern Republic of Belarus. 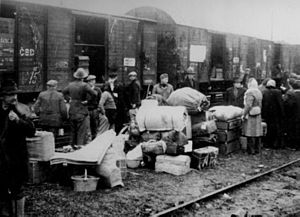 Polish families deported to Siberia during the Soviet occupation of Kresy. The number of Poles extracted from their homes and sent into barren land reached 1,700,000.

Under the Soviet occupation, the Western Belarusian citizenry, particularly the Poles faced a "filtration" procedure by the NKVD apparatus, which resulted in over 100,000 people forcibly deported to eastern parts of the USSR (i.e. Siberia) in the very first wave of expulsions.[11] In total, during the next two years some 1.7 million Polish citizens were put on freight trains and sent from the Polish Kresy to labour camps in the Gulag.[12]

According to the first Polish national census of 1921, there were around 1 million Belarusians in the country. There are historians who estimate the number of Belarusians in Poland at that time to be perhaps 1.7 million[3] or even up to 2 million.[4] In the 1921-1926 period, the newly-independent Poland did not have a consistent policy towards its ethnic minorities yet. The Belarusians in Western Belarus had to contend with the trend towards Polonization and their schools in 1921 were facing financial problems.[13]

After the 1930 elections in Poland, Belarusian representation in the Polish parliament was reduced and in the early 1930s the Polish government started to introduce policies intended to Polonize minorities. Use of the Belarusian language was not being promoted in the light of the fact that the limited edition of a first-ever textbook of Belarusian grammar was written no earlier that 1918.[13] At the onset of World War II only 44 schools teaching in Belarusian still existed in Poland. Meanwhile, refugees from Western Belarus were arrested by Soviet authorities and frequently executed, Kurapaty graves contain many products from Poland - cloths, shoes. The most prominent victim of NKVD was the activist and linguist Branislaw Tarashkyevich. Frantsishak Alyakhnovich was liberated in 1933 after several years in Soviet camps and exchanged toward Tarashkyevich.

Presently, Belarus annually celebrates September 17 as a public holiday,[14] dubbed the reunification of Belarus. No deportations of Poles, nor their ethnic cleansing are being signified by the state.[15]