West Coast of the United States

From Infogalactic: the planetary knowledge core
Jump to: navigation, search
Not to be confused with Western United States. 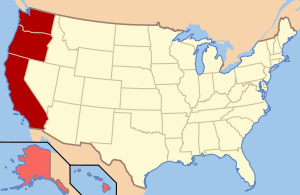 The states shown in dark red are included in the term West Coast or Pacific Coast.
This video was taken by the crew of Expedition 29 on board the ISS on a pass down the American West Coast.

The West Coast or Pacific Coast is the term for the westernmost coastal states of the United States. The term most often refers to the states of California, Oregon and Washington. More specifically, the term refers to an area defined on the east by the Cascade Range, Sierra Nevada and Mojave Desert, and on the west by the Pacific Ocean. The U.S. Census groups the five states of California, Oregon, Washington, Alaska, and Hawaii together as the Pacific States division.[1]

As of the 2010 Census, the estimated population of the Census Bureau's Pacific Region was approximately 47.8 million (56.9 million if Nevada and Arizona are included) – about 15.3% (18.2% with Nevada and Arizona) of US population.[2] The largest city on the west coast of the United States is Los Angeles.

Major cities and metropolitan areas on the West Coast include (from north to south):

However, of these aforementioned cities and metropolitan areas, only Los Angeles/Long Beach, San Francisco and San Diego are directly on the Pacific Ocean.

See also: Models of migration to the New World, History of Mesoamerica, and Native Americans in the United States

The history of the West Coast begins with the arrival of the earliest known humans of the Americas, Paleo-Indians, crossing the Bering Strait from Eurasia into North America over a land bridge, Beringia, that existed between 45,000 BCE and 12,000 BCE (47,000–14,000 years ago). Small isolated groups of hunter-gatherers migrated alongside herds of large herbivores far into Alaska. Between 16,500 BCE and 13,500 BCE (18,500–15,500 years ago), ice-free corridors developed along the Pacific coast and valleys of North America and possibly by sea.[3]

The West Coast of the United States has an oceanic climate in its Northern edge towards the Canadian border, but from the Californian border towards the Mexican border the climate is mediterranean. The coastline sees significantly mild temperatures when compared to the inland areas, with differences of 19 °C between Eureka's and Redding's July temperatures, in spite of less than 100 miles separating the locations. Similar fluctuations can be seen all through the coastline, and could partially be explained by the cold currents in the Pacific ocean moderating coastal temperatures. In fact, the northern half of the Californian coast has the coldest low-elevation summer daytime high temperatures for the 37th to 40th parallel in the Northern hemisphere, normally associated with humid subtropical climate or humid continental climate with hot summers and cold winters. This does not only occur in the San Francisco Bay Area, but it also affects Santa Monica in Los Angeles, Southern California, with very little yearly temperature differences but with cool summers similar to those expected in Northern Europe. A short journey inland and summer temperatures are compatible with the rest of the United States on the same parallels, sometimes warmer due to prevailing winds from the Nevada and Arizona hot desert climate.

Since the West Coast has been populated by immigrants more recently than the East Coast, its culture is considerably younger. Additionally, its demographic composition underlies its cultural difference from the rest of the United States. California's history first as a major Spanish colony, and later Mexican territory, has given the lower West Coast a distinctive Hispanic tone, which it also shares with the rest of the Southwest. Similarly, two of the three cities in which Asian Americans have concentrated, San Francisco and Los Angeles,[4][5][6] are located on the West Coast, with significant populations in other West Coast cities. San Francisco's Chinatown, the oldest in North America, is a vibrant cultural center.

Compared to the East Coast, the West has generally been considered less bounded by tradition and more freely engaged and open to new ideas.[7] The West Coast also has a proportionally larger share of green cities within the United States, which manifests itself in different cultural practices such as bicycling and organic gardening.[8]

On the other hand, the French writer Guillaume Faye, comparing California to Europe, wrote that "as super-America, California stands out as the absolute antithesis of authentic Europe[...] California has set itself up as the world centre of the simulacrum and the inauthentic, as the absolute synthesis of "cool" Stalinism. An hysterical land; focus and meeting-place for the rootless, California is the land of non-history, of the non-event, but at the same time the site of the constant swirl, the uninterrupted rhythm of fashion, that is to say, the site of tremors going nowhere, those tremors which so obsess it, constantly threatened as it is by earthquakes."[9] Other writers, like Jean Baudrillard, Mike Davis, and Umberto Eco, have made related statements on Californian culture.[10][11][12]

In the Northwest, Portland and Seattle are both considered among the coffee capitals of the world.[13] While Starbucks originated in Seattle, both towns are known for small-scale coffee roasters and independent coffeeshops. In the Pacific Northwest at large, which includes the Canadian west coast, the culture has been significantly shaped by the environment, especially by its forests, mountains, and rain. This may account for the fact that the Northwest has many high-quality libraries and bookshops (most notably Powell's Books and the Seattle Central Library) and a "bibliophile soul".[14] The region also has a marginal, but growing independence movement based on bioregionalism and a Cascadian identity.[15] The Cascadian flag has become a popular image at Portland Timbers games.