From Infogalactic: the planetary knowledge core
Jump to: navigation, search
Not to be confused with West Frisian Dutch.

West Frisian, or simply Frisian (Frysk; Dutch: Fries [ˈfris]) is a language spoken mostly in the province of Friesland (Fryslân) in the north of the Netherlands, mostly by those of Frisian ancestry. It is the most widely spoken of the three Frisian languages. 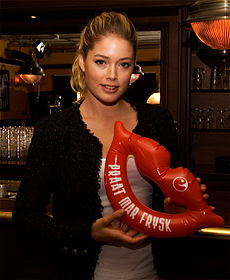 Most speakers of West Frisian live in the province of Friesland in the north of the Netherlands. This province was formerly officially called Friesland, but officially changed its name to Fryslân in 1997. The province has 643,000 inhabitants (2005); of these, 94% can understand spoken Frisian, 74% can speak Frisian, 75% can read Frisian, and 27% can write it.[3]

For over half of the inhabitants of the province of Friesland, 55% (ca. 354,000 people), Frisian is the native language. In the central east, Frisian speakers spill over the province border, with some 4,000–6,000 of them actually living in the province of Groningen, in the triangular area of the villages Marum (Frisian: Mearum), De Wilp (De Wylp), and Opende (De Grinzer Pein).[4]

Also, many Frisians have left their province in the last sixty years for more prosperous parts of the Netherlands. Therefore, possibly as many as 150,000 Frisian speakers live in other Dutch provinces now, particularly in the urban agglomeration in the West, and in neighbouring Groningen and newly reclaimed Flevoland.[citation needed]

In addition, there is a Frisian diaspora abroad, with Friesland having sent, in relative terms, the highest percentage of emigrants of all Dutch provinces between the Second World War and the 1970s. The largest concentrations of Frisian speakers outside the Netherlands are located in Canada, the United States, Australia, and New Zealand.

Apart from the use of Frisian as a first language, it is also spoken as a second language by about 120,000 people in the province of Friesland.[5]

The West Frisian language consists of eight mutually intelligible dialects, of which four are widely spoken and the other four are confined to small communities of less than a hundred to several hundreds of speakers.

The least-used dialect of West Frisian is Skiermûntseagersk, the island dialect of Schiermonnikoog (Frisian: Skiermûntseach), which is actually on the verge of extinction, because it is spoken by no more than 50–100 people (out of an island population of 900 people).

Hylpersk (in Dutch known as Hindeloopers), the archaic Frisian dialect of the peninsular harbour town of Hindeloopen (Hylpen), on the west coast, is still spoken by some 300 people at the most.

Skylgersk (also known as Westersk) and Aastersk are the dialects of the western and eastern parts of the island of Terschelling (Skylge) and have about 800 and 400 speakers respectively. They are separated from each other by the Dutch dialect of Midslands, which is spoken in the central part of Terschelling.

Because of their insular nature these four less-used dialects are also those that have deviated the most from mainstream Frisian. In fact, three of the four widely used mainland dialects are so much alike that a non-Frisian could probably not make out any differences.

The fourth mainland dialect, that of Súdwesthoeksk ("South Western"), which is spoken in an area called de Súdwesthoeke ("the South West Corner"), deviates from mainstream Frisian in that it does not adhere to the so-called newer breaking system, a prominent grammatical feature in the three other main dialects.

The Noardhoeksk ("Northern") dialect is spoken in the north eastern corner of the province but does not differ much from Wâldfrysk.

By far the two most widely spoken West Frisian dialects are Klaaifrysk and Wâldfrysk. Both these names are derived from the Frisian landscape. In the western and north-western parts of the province, the region where Klaaifrysk is spoken, the soil is made up of thick marine clay, hence the name Klaaifrysk, which literally means "Clay Frisian". While in the Klaaifrysk speaking area ditches are used to separate the pastures, in the eastern part of the province, where the soil is sandy, and water sinks away much faster, rows of trees are used to that purpose. Therefore, the dialect spoken in the eastern area is called Wâldfrysk, meaning "Wood Frisian" or "Forest Frisian".

Although Klaaifrysk and Wâldfrysk are mutually very easily intelligible, there are, at least to native Frisian speakers, a few very conspicuous differences. These include the pronunciation of the words my ("me"), dy ("thee"), hy ("he"), sy ("she" or "they"), wy ("we") and by ("by"), and the diphthongs ei and aai.[6]

Of the two, Wâldfrysk probably has the greater number of speakers, but because the western clay area was originally the more prosperous part of the mostly agricultural province, Klaaifrysk has had the larger influence on the West Frisian standardised language.

In the early Middle Ages the Frisian lands stretched from the area around Bruges, in what is now Belgium, to the river Weser, in northern Germany. At that time, the Frisian language was spoken along the entire southern North Sea coast. Today this region is sometimes referred to as Greater Frisia or Frisia Magna, and many of the areas within it still treasure their Frisian heritage, even though in most places the Frisian language has been lost.

Old Frisian, however, did bear a striking similarity to Old English. This similarity was reinforced in the late Middle Ages by the Ingvaeonic sound shift, which affected Frisian and English, but the other West Germanic varieties hardly at all. Historically, both English and Frisian are marked by the suppression of the Germanic nasal in a word like us (ús), soft (sêft) or goose (goes): see Anglo-Frisian nasal spirant law. Also, when followed by some vowels the Germanic k developed into a ch sound. For example, the Frisian for cheese and church is tsiis and tsjerke, whereas in Dutch it is kaas and kerk.

One major difference between Old Frisian and modern Frisian is that in the Old Frisian period (ca. 1150–ca. 1550) grammatical cases still occurred. Some of the texts that are preserved from this period are from the twelfth or thirteenth, but most are from the fourteenth and fifteenth centuries. Generally, all these texts are restricted to legal documents. Although the earliest definite written examples of Frisian are from approximately the 9th century, there are a few examples of runic inscriptions from the region which are probably older and possibly in the Frisian language. These runic writings, however, usually do not amount to more than single- or few-word inscriptions, and cannot be said to constitute literature as such. The transition from the Old Frisian to the Middle Frisian period (ca. 1550–ca. 1820) in the sixteenth century, is based on the fairly abrupt halt in the use of Frisian as a written language.

Up until the fifteenth century Frisian was a language widely spoken and written, but from 1500 onwards it became an almost exclusively oral language, mainly used in rural areas. This was in part due to the occupation of its stronghold, the Dutch province of Friesland (Fryslân), in 1498, by Duke Albert of Saxony, who replaced Frisian as the language of government with Dutch.

In this period the Frisian poet Gysbert Japiks (1603–1666), a schoolteacher and cantor from the city of Bolsward (Boalsert), who largely fathered modern Frisian literature and orthography, was really an exception to the rule.

His example was not followed until the nineteenth century, when entire generations of Frisian authors and poets appeared. This coincided with the introduction of the so-called newer breaking system, a prominent grammatical feature in almost all West Frisian dialects, with the notable exception of Súdwesthoeksk. Therefore, the New Frisian period is considered to have begun at this point in time, around 1820.

West Frisian uses the Latin alphabet. A, E, O and U may be accompanied by circumflex or acute accents.

In alphabetical listings both I and Y are usually found between H and J. When two words differ only because one has I and the other one has Y (stikje/stykje), the word with I precedes the one with Y.

In handwriting, IJ is written as a single letter (see IJ (digraph)), whereas in print the string IJ is used. In alphabetical listings IJ is most commonly considered to consist of the two letters I and J, although in dictionaries there is an entry IJ between X and Z telling the user to look browse back to I. 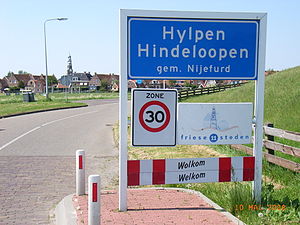 In 1951, Frisian language activists, protesting the exclusive use of Dutch in the courts, caused a riot in Leeuwarden.[7] The resulting inquiry led to the establishment of a committee of inquiry. This committee recommended that the Frisian language would receive a legal basis as minority language.

Since 1956, West Frisian has an official status along with and equal to Dutch, in the province of Friesland. It is used in many domains of Frisian society, among which are education, legislation, and administration. In 2010, some sixty public transportation ticket machines in Friesland and Groningen added a Frisian-language option.[8]

Although in the courts of law the Dutch language is still mainly used, in the province of Friesland, Frisians have the right to give evidence in their own language. Also, they can take the oath in Frisian in courts anywhere in the Netherlands.

Primary education in Friesland was made bilingual in 1956, which means Frisian can be used as a teaching medium. In the same year, Frisian became an official school subject, having been introduced to primary education as an optional extra in 1937. It was not until 1980, however, that Frisian got the status of a required subject in primary schools, and not until 1993 that it got the same position in secondary education.

In 1997, the province of Friesland officially changed its name from the Dutch form Friesland to the Frisian Fryslân. So far 6 out of 31 municipalities (Dantumadiel, Tytsjerksteradiel, Boarnsterhim, Littenseradiel, Wûnseradiel and Ferwerderadiel) have changed their official geographical names from Dutch to Frisian.

Within ISO 639 West Frisian falls under the codes 'fy' and 'fry', which were assigned to the collective Frisian languages.

Folklore about relation to English 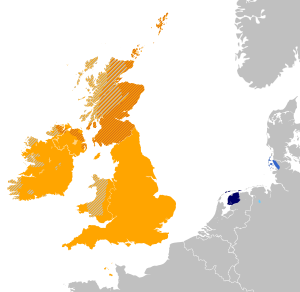 The saying "As milk is to cheese, are English and Fries" describes the observed similarity between Frisian and English. One rhyme that is sometimes used to demonstrate the palpable similarity between Frisian and English is "Rye bread, butter and green cheese is good English and good Fries", which sounds not very different from "Brea, bûter en griene tsiis is goed Ingelsk en goed Frysk".[9]

example (help·info)) (in English, "Butter, rye bread and green cheese, whoever can't say that is no genuine Frisian") was used, according to legend, by the 16th century Frisian freedom fighter Pier Gerlofs Donia as a shibboleth that he forced his captives to repeat to distinguish Frisians from Dutch and Low Germans.

In the Netherlands, West Frisian can refer to the local language spoken in the regions of Hoorn, Enkhuizen and Medemblik.

Below is the Lord's Prayer from the Frisian Bible third edition, published in 1995, with the corresponding English text from the 1662 Book of Common Prayer.

Us Heit yn 'e himel, (Our Father, which art in heaven,)
lit jo namme hillige wurde, (hallowed be thy name;)
lit jo keninkryk komme, (thy kingdom come;)
lit jo wil dien wurde (thy will be done,)
op ierde likegoed as yn 'e himel. (in Earth as it is in heaven.)
Jou ús hjoed ús deistich brea (Give us this day our daily bread.)
en ferjou ús ús skulden (And forgive our trespasses,)
sa't wy ús skuldners ek ferjûn hawwe; (as we forgive them that trespass against us.)
en lit ús net yn fersiking komme, (And lead us not into temptation;)
mar ferlos ús fan 'e kweade; (but deliver us from evil.)
want jowes is it keninkryk (For thine is the kingdom,)
en de krêft (the power,)
en de hearlikheid (and the glory,)
oant yn ivichheid. Amen. (forever and ever. Amen)