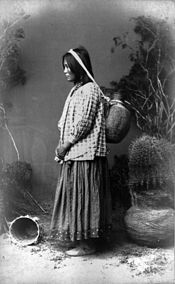 The Western Apache live primarily in east central Arizona, in the United States. Most live within reservations. The Fort Apache, San Carlos, Yavapai-Apache, Tonto Apache, and the Fort McDowell Mohave-Apache Indian reservations are home to the majority of Western Apache and are the bases of their federally recognized tribes. In addition, there are numerous bands. The Western Apache bands call themselves Ndee (Indé) (“The People”); because of dialectical differences the Pinaleño/Pinal and Arivaipa/Aravaipa bands of the San Carlos Apache pronounce the word Innee or Nnēē:.[1]

The various dialects of Western Apache (called by them Ndee biyati' / Nnee biyati') are a form of Apachean, a branch of the Southern Athabaskan language family. The Navajo speak a related Apachean language, but the peoples separated several hundred years ago and are considered culturally distinct. Other indigenous peoples who are Athabaskan speakers are located in Alaska and Canada.

The anthropologist Grenville Goodwin classified the Western Apache into five groups based on Apachean dialect and culture:[2]

Since Goodwin, other researchers have disputed his conclusion of five linguistic groups, but have agreed on three main Apachean dialects with several subgroupings:

Some 20,000 Western Apache still speak their native language, and efforts have been made to preserve it. Bilingual teachers are often employed in the lower elementary grades, to expedite this goal, but the tendency toward children learning to speak only English, mingled with occasional Spanish, remains dominant.

In relation to culture, tribal schools offer classes in native handicrafts, such as basket weaving, making bows, arrows, spears, shields; cradles for infants, native costumes from buckskin for the young women, and the making of silver jewelry (often by the men) at the elementary and secondary level.

(Dzil Łigai Si'án Ndee - ‘People of the White Mountains’, Spanish: Sierra Blanca Apache, ranged from the White Mountains in the north over the Gila Mountains south to the Pinaleno Mountains, lived and planted along the East Fork North Fork of the White River, Turkey Creek, Black River and the Gila River, most isolated and eastern Western Apache group), a federally recognized tribe, including the Tca-tci-dn or "Dischiidn" (“red rock strata people”) clan of chief Pedro's Carrizo band of the Cibecue Apaches, who were not forced to move to San Carlos in 1875[3][4]

(Spanish derivation of the autonym Dishchíí Bikoh - ‘People of the Red Canyon’, ranged north of the Salt River to well above the Mogollon Rim in the west to the Mazatzal Mountains), today all part of the federally recognized tribe of the White Mountain Apache of the Fort Apache Reservation

(Tsékʼáádn - “Metate People”, lived on both sides of the San Pedro River and in the foothills of the Santa Catalina Mountains near Tucson), a federally recognized tribe composed of the San Carlos Apache proper and several groups of the Cibecue Apache (excluding the Tca-tci-dn (“red rock strata people”) clan of the Carrizo band), some Tonto Apache, Lipan as well Chiricahua Apache peoples.

(autonym: Dilzhé`e, the Chiricahua called them Ben-et-dine - ‘wild’, ‘crazy’; neighboring Western Apache called them Koun`nde - ‘Those who you don’t understand’, ‘wild rough People’, the Spanish adapted this as Tonto - 'loose', 'foolish', the Dine called the Tonto Apache and neighboring Yavapai Dilzhʼíʼ dinéʼiʼ - ‘People with high-pitched voices’, lived from the San Francisco Peaks, East Verde River and Oak Creek Canyon along the Verde River into the Mazatzal Mountains and to the Salt River in the SW and the Tonto Basin in the SE, extending eastwards towards the Little Colorado River, were the most westerly group of the Western Apache)

Other bands and groups

Often groups of Wi:pukba (Wipukepa) and Guwevkabaya (Kwevkepaya) of the Yavapai lived together with the Tonto Apache (as well as bands of the San Carlos Apache) in bilingual rancherias, and could not be distinguished by outsiders (Americans, Mexicans or Spanish) except on the basis of their "Mother tongues." The Yavapai and Apache together were often referred to as Tonto or Tonto Apaches. Therefore, it is not always easy to find out whether it is now exclusively dealing with Yavapai or Apache, or those mixed bands. The Wi:pukba (Wipukepa) and Guwevkabaya (Kwevkepaya) were therefore, because of their ancestral and cultural proximity to the Tonto and San Carlos Apaches, often incorrectly called Yavapai Apaches or Yuma Apaches. The Ɖo:lkabaya (Tolkepaya), the southwestern group of Yavapai, and the Hualapai (also belonging to the Upland Yuma Peoples) were also referred as Yuma Apaches or Mohave Apaches.[9]