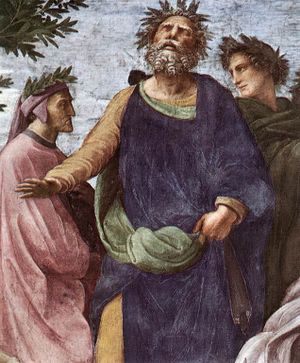 Dante, Homer and Virgil in Raphael's Parnassus fresco (1511), which visualizes the Western canon

The Western canon is the body of books and, more broadly, music and art that Western scholars generally accept as the most important and influential in shaping Western culture. As such, it includes work perceived as the greatest works of artistic merit. Such a canon is important to the theory of educational perennialism and the development of high culture. The idea of a Canon has been used to address the question What is Art?; according to this approach, a work is art by comparison to the works in the canon—or conversely, any aesthetic law, to be valid, should not rule out any work included in the canon.[1]

The process of listmaking—defining the boundaries of the canon—is endless. The philosopher John Searle has said, "In my experience there never was, in fact, a fixed 'canon'; there was rather a certain set of tentative judgments about what had importance and quality. Such judgments are always subject to revision, and in fact they were constantly being revised."[2]

One of the notable attempts at compiling an authoritative canon in the English-speaking world was the Great Books of the Western World program. This program, developed in the middle third of the 20th century, grew out of the curriculum at the University of Chicago. University president Robert Maynard Hutchins and his collaborator Mortimer Adler developed a program that offered reading lists, books, and organizational strategies for reading clubs to the general public.

An earlier attempt, the Harvard Classics (1909), was promulgated by Harvard University president Charles W. Eliot, whose thesis was the same as Carlyle's:

...The true University of these days is a Collection of Books. 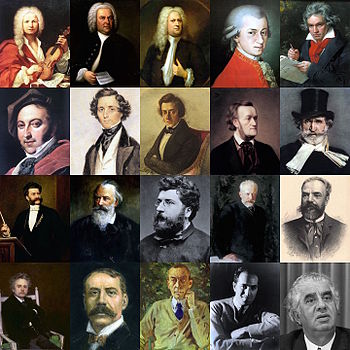 There has been an ongoing debate, motivated by politics and social agendas, over the nature and status of the canon since at least the 1960s, much of which is rooted in critical theory, feminism, critical race theory, and Marxist attacks against capitalism and classical liberal principles.[4] In the United States, in particular, the canon has been attacked as a compendium of books written mainly by "dead European men", that does not represent the viewpoints of many in contemporary societies around the world. University of Chicago professor, political philosopher and literary critic Allan Bloom in his bestselling 1987 book The Closing of the American Mind, has disagreed strongly.[5] Yale University Professor of Humanities and famous literary critic Harold Bloom (no relation to Allan) has also argued strongly in favor of the canon,[6] and in general the canon remains as a represented idea in many institutions,[2] though its implications continue to be debated.

Defenders maintain that those who undermine the canon do so out of primarily political interests, and that such criticisms are misguided and/or disingenuous. As John Searle has written:

There is a certain irony in this [i.e., politicized objections to the canon] in that earlier student generations, my own for example, found the critical tradition that runs from Socrates through the Federalist Papers, through the writings of Mill and Marx, down to the twentieth century, to be liberating from the stuffy conventions of traditional American politics and pieties. Precisely by inculcating a critical attitude, the "canon" served to demythologize the conventional pieties of the American bourgeoisie and provided the student with a perspective from which to critically analyze American culture and institutions. Ironically, the same tradition is now regarded as oppressive. The texts once served an unmasking function; now we are told that it is the texts which must be unmasked.[2]

One of the main objections to a canon of literature is the question of authority—who should have the power to determine what works are worth reading and teaching? Searle's rebuttal suggests that "one obvious difficulty with it [i.e., arguments against hierarchical ranking of books] is that if it were valid, it would argue against any set of required readings whatever; indeed, any list you care to make about anything automatically creates two categories, those that are on the list and those that are not."[2]

Though there is debate among theorists, individuals such as teachers and students consider works within the canon those best for understanding social and historical contexts from select time periods. Additionally, the works are usually considered a craft and commonly serve as a guide or rule, particularly for senior students, when reading and writing.[7] Altieri (1983) supports this stating canons are "an institutional form for exposing people to a range of idealized attitudes." It is according to this notion that work may be removed from the canon over time to reflect the contextual relevance and thoughts of society.[8]

Works commonly included in the canon include works of fiction, such as some epic poems, poetry, music (especially symphonies), drama, novels, and other assorted forms of literature from the many diverse Western (and more recently non-Western) cultures. Many non-fiction works are also listed, primarily from the areas of religion, mythology, science, philosophy, psychology, economics, politics, and history.

Works that directly address the canon (both for and against):

Critics of canons and other lists of works considered to be of a higher aesthetic or intellectual quality point out that in some cases, these lists consist almost exclusively of works and pieces by white males. Literature, music and art from women, non-whites and minority groups are far less represented.

In classical music, during the nineteenth century a view developed that selected pieces from the common practice period formed a "canon" of the most important works. In the 2000s, the standard concert repertoire of professional orchestras, chamber music groups and choirs tends to focus on works by a relatively small number of composers, such as Bach, Handel, Vivaldi, Mozart, Haydn, Beethoven, Schubert and Brahms. Many of the works deemed to be part of the musical canon are from genres regarded as the most serious, such as the symphony, concerto, string quartet and opera. While women composers do have their works performed, almost all of the commonly-performed works in the standard concert repertoire are by male composers.

Examples of shorter canonical lists of most important works include the following: 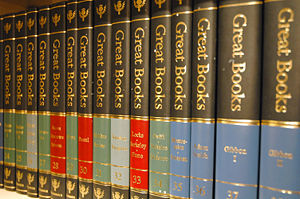 More comprehensive collections that include large parts of the Western canon include the following: