Westminster Choir College is a residential conservatory of music located in Princeton, New Jersey, United States. It is part of Rider University.

Westminster Choir College educates men and women at the undergraduate and graduate levels for musical careers in music education, voice performance, piano performance, organ performance, pedagogy, music theory and composition, conducting, sacred music, and arts management; professional training in musical skills with an emphasis on performance is complemented by studies in the liberal arts. All students study with Westminster's voice faculty, the largest voice faculty in the world. The school's proximity to New York City and Philadelphia provides students with easy access to the musical resources of both cities.

1920–1932: Presbyterian beginnings to the creation of a college

In 1928, the Choir and the Cincinnati Symphony Orchestra conducted by Leopold Stokowski made the nation's first coast-to-coast broadcast on Cincinnati radio station WLW. By a few years later, it made a total of 60 half-hour broadcasts from NBC's New York facilities. 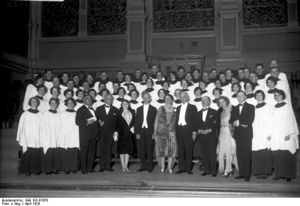 Dayton-Westminster-Choir at Berliner Philharmonie in 1929

On March 9, 1929, the Choir performed at the White House for newly inaugurated Herbert Hoover.[1]

The first European tour took place in 1929 and was sponsored by Dayton philanthropist Katharine Houk Talbott and endorsed by Walter Damrosch, conductor of the New York Symphony Orchestra. The tour included 26 concerts in major cities of Europe.

Originally a three-year program, the Choir School moved to Ithaca College in New York State in 1929 and enlarged its curriculum to a four-year program culminating in a Bachelor of Music degree. A major reason for the move involved the need to be able to reach the major cities of Chicago, Philadelphia, and New York by rail. All three were cities that sought the choir under Williamson.

In 1932, the choir school relocated to Princeton, New Jersey, which became its permanent home. Classes were held in the First Presbyterian Church and the Princeton Seminary until 1934 when the school moved to its present campus. This was made possible by a large gift from the philanthropist Sophia Strong Taylor. The dedication of the new campus was marked by a performance of Johann Sebastian Bach's Mass in B minor at the Princeton University Chapel with the Westminster Choir, soloists, and the Philadelphia Orchestra conducted by Leopold Stokowski. The services of the soloists, orchestra, and conductor were a gift from Stokowski. 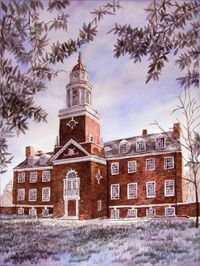 There was a second European choir tour in 1934 lasting nine weeks and highlighted by a live radio broadcast from Russia to the United States. In the 14 years since its founding in 1920, the choir already had two European tours which earned it international acclaim and a campus of its own. The State of New Jersey in 1939 granted the choir school accreditation and the name Westminster Choir College was adopted.

In years to come, under Williamson's leadership, the choir would begin having regular concerts with the New York Philharmonic and the Philadelphia Orchestra. The Westminster Choir sang with the New York Philharmonic for the first time in 1939 conducted by Sir John Barbirolli. Since that time the choir has sung over three hundred performances with the Philharmonic, a record number for a single choir to perform with an orchestra. Later that year the choir sang with the NBC Symphony Orchestra, conducted by Arturo Toscanini. That same year the choir, directed by Williamson, sang at the dedication of the New York World's Fair which was broadcast to 53 countries.

In 1957, under the auspices of the U.S. State Department Cultural Exchange Program, the choir undertook a five-month world tour, concertizing in 22 countries, covering 40,000 miles (64,000 km) and appearing before approximately a quarter of a million people.

Williamson retired as President of Westminster Choir College in 1958. Williamson's retirement consisted of conducting choral clinics and vocal festivals throughout the United States, Japan, Korea and the Philippines. A South American choir tour was being planned by the State Department but was cancelled because of Williamson's untimely death in 1964. In accordance with his request, Williamson's ashes were scattered on his beloved campus on July 3, 1964. This was said to have taken place during the performance of the Verdi Requiem with the Westminster Festival Choir, soloists, and the Festival Orchestra conducted by maestro Eugene Ormandy. This performance on the Westminster campus was part of the Tercentennial Celebration of the State of New Jersey. The following day a memorial service for Williamson was held in the College Chapel.

In 1976, the choir college celebrated its 50th anniversary, highlighted by a performance of Ludwig van Beethoven's Ninth Symphony with the Atlanta Symphony Orchestra conducted by Robert Shaw, alumni soloists, and the Westminster Alumni Choir on the Princeton University campus. Despite a promising future at the 50th anniversary, Westminster soon began to see its future and prospects for continued existence threatened. Facilities on the campus were in disrepair, and Erdman Hall was ultimately condemned as unfit for use. Recognizing that the college could not continue in this path, Westminster was forced with two options, either finding a larger university to merge with or closure.

Several schools, including nearby Princeton University as well as Drew University, Yale University, The Curtis Institute of Music, and The Juilliard School, all had an interest in purchasing Westminster Choir College. The desire of Westminster to remain in its historic campus resulted in an arrangement with the nearby Rider College.[2] In 1992, following a year of affiliation, Rider College merged with Westminster Choir College and the music school became a part of the newly created Rider University. Despite promises that Rider would maintain the Westminster Choir College campus in Princeton, two years later, Rider President J. Barton Luedeke began exploring a move which would relocate the choir college campus to Lawrenceville, New Jersey, to be with the rest of Rider University.[3] By 1996, the choir college appeared to have a vibrant fiscal future in Princeton, operating in the black, thanks to increased enrollment and donations.[4] One year later Erdman Hall was renovated, restored, and reopened as the Presser Music Center at Erdman Hall, featuring teaching studios, a keyboard laboratory, voice library and resource center, and new classroom space.

In 2005 the school unveiled an ambitious master plan calling for a new building and other upgrades, the first to be created on the campus since the college was placed under Rider University's stewardship.[7] The choir college also entered a cooperative agreement with the Princeton Regional Schools which allows for up to 40 Westminster performances a year to occur in their newly created Regional Performing Arts Center, heavily alleviating the struggle the Princeton campus had had by having no dedicated, large performance space on the campus.[8]

The lack of a large concert venue was solved in 2013 when the State of New Jersey allotted $4.6 million to Rider University to be spent on new academic facilities for Westminster's campus. Combined with donations from various friends, alumni, and admirers of the conservatory, the funds spent on this project far exceeded $5 million. Opened in 2014 , the complex is named the Marion Buckelew Cullen Center in honor of the philanthropist who died in July and made a $5 million bequest to Westminster Choir College. The new building contains a 3,000-square-foot performance and rehearsal hall named the Hillman Performance Hall, in recognition of the Henry L. Hillman Foundation, which provided a $3 million grant to support the project. In addition to the performance/rehearsal hall, the Cullen Center includes a large lobby, a green room and three flexibly configured classrooms that accommodate a wide range of academic and choral uses. The Cullen Center also includes an integrated connection to The Playhouse that provides improved audience access and amenities. To maximize the opportunities the project offers for enhancing The Playhouse itself, a campaign is under way to secure $1.5 million to upgrade this building that has played such an important role in Westminster’s history. Ground was broken for the project in the summer of 2013 and completion is expected by the beginning of the fall 2014 semester.[9]

In the Fall of 2010, Westminster Symphonic Choir performed with Jacques Lacombe and the New Jersey Symphony Orchestra in a series of concerts of Beethoven's Ninth Symphony.[11] The Symphonic Choir also appeared with the Staatskapelle Dresden in performances of Brahms' Ein deutsches Requiem in Philadelphia's Kimmel Center for the Performing Arts and New York City's Avery Fisher Hall.[12][13]

Past and present faculty