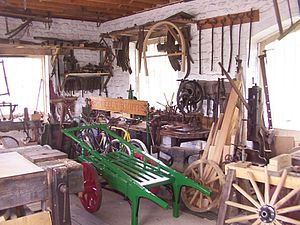 A wheelwright is a person who builds or repairs wooden wheels. The word is the combination of "wheel" and the archaic word "wright", which comes from the Old English word "wryhta", meaning a worker or maker.[1] This occupational name eventually became the English surname Wheelwright.

These tradesmen made wheels for carts and wagons by first constructing the hub (called the nave), the spokes and the rim/felloe segments (pronounced fellies) and assembling them all into a unit working from the center of the wheel outwards. Most wheels were made from wood, but other materials have been used, such as bone and horn, for decorative or other purposes. Some earlier construction for wheels such as those used in early chariots were bound by rawhide that would be applied wet and would shrink whilst drying, compressing and binding the woodwork together. After many centuries wheels evolved to be straked with iron, a method of nailing iron plates onto the felloes to protect against wear on the ground and to help bind the wheel together.

Around the middle of the 19th century, iron strakes were replaced by a solid iron tyre custom made by a blacksmith, who first measured each wheel to ensure proper fit.[citation needed] Strakes were replaced around the mid-19th century by more dependable iron tyres that were always made smaller than the wheel in circumference, expanded by heating in a fire then placed on the wooden wheel and quenched quickly with water to shrink it onto the wood, then fastened to the wooden wheel by nails or tyre bolts. Tyre-bolts were less likely than tyre-nails to break off because they were flush finished and countersunk into the wheel's outer surface also allowing for wear without wearing the bolt head away.[citation needed]

During the second half of the 19th century, the use of pre-manufactured iron hubs and other factory-made wood, iron and rubber wheel parts became increasingly common. Companies such as Henry Ford developed manufacturing processes that soon made the village wheelwright obsolete. With the onset of two world wars, the trade soon went into decline and was very rare by the 1960s and almost extinct by the year 2000. However, owing to the efforts of organisations like the Worshipful Company of Wheelwrights, wheelwrights still continue to operate in the UK. [2]

In modern times, wheelwrights continue to make and repair a wide variety of wheels, including those made from wood and banded by iron tyres. The word wheelwright remains a term usually used for someone who makes and repairs wheels for horse-drawn vehicles, although it is sometimes used to refer to someone who repairs wheels, wheel alignment, rims, drums, discs and wire spokes on modern vehicles such as automobiles, buses and trucks. Wheels for horse-drawn vehicles continue to be constructed and repaired for use by people who use such vehicles for farming, competitions and presentations of historical events such as reenactments and living history.