The initial design was developed in the early 1940s as a sea-going follow on to the S-class submarine. As a result of war experience and the capture of German technology at the end of the war, the Soviets issued a new design requirement in 1946. The revised design was developed by the Lazurit Design Bureau based in Gorkiy. Like most conventional submarines designed 1946-1960, the design was heavily influenced by the Type XXI U-boat.[2]

Between 1949 and 1958 a total of 236 of an envisaged 340 [3] submarines of this type were commissioned into the Soviet Navy. The vessels were initially designed as coastal patrol submarines. These patrol variants are known in the west as Whiskey I, II, III, IV, and V and were called Project 613 in the Soviet Union. 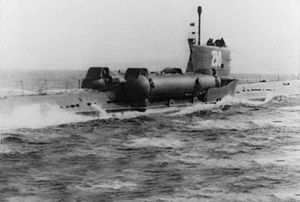 In the 1950s and 1960s some Whiskey submarines were converted to guided missile submarines. These boats had the capability to fire one to four SS-N-3 Shaddock cruise missiles. In 1956, the first prototype was ready. It was a regular Whiskey-class submarine which was fitted with a launch tube aft of the sail that contained a single SS-N-3c land-attack missile. This vessel was known in the west as Whiskey Single Cylinder. Between 1958 and 1960, six additional Whiskey-class submarines were converted to carry guided missiles. These boats had two missile tubes behind the sail, and were known in the west as the Whiskey Twin Cylinder (Soviet designation:Project 644).[4]

Between 1960 and 1963, six boats received an extended sail that could contain four Shaddock missiles. These were called Whiskey Long Bin in the West and Project 665 in the Soviet Union.[4] All guided missile variants of the Whiskey class carried the P-5/ NATO SS-N-3c Shaddock land-attack missile, and had to surface in order to fire their missiles. The boats of the single and twin cylinder class also had to raise their missile tubes, which were normally positioned horizontally.

The "Long Bin" boats did not handle well, the missile launchers caused stability problems and water flow around the missile fittings was very noisy.[5] All were soon retired from service. Four were converted to Project 640 radar picket boats (which were called Whiskey Canvas Bag). Two vessels were converted to submarines for 'fishery research' and 'oceanographic research' purposes. In the Soviet navy, the patrol variants of this class were replaced by Romeo-class submarines. The guided missile variants were replaced by Juliett-class submarines.

The Soviet Union built a total of 236 or 215 Whiskeys (sources vary; it appears the initial 21 Chinese-built boats are often included with the Soviet boats). Vice Admiral Burov, head of the Soviet Defense Ministry's Shipbuilding Institute from 1969 to 1983, confirms 215 units built.[4]

Patrol submarines of the Whiskey class were exported to:

Cuba and Syria ordered used Whiskey-class submarines for use as battery charging hulks. The guided missile and radar picket boats were never exported.