From Infogalactic: the planetary knowledge core
Jump to: navigation, search
For other uses, see Whitehall (disambiguation). 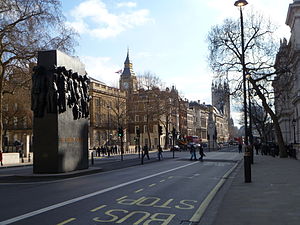 Whitehall pictured in 2012, with The Cenotaph and Monument to the Women of World War II in the middle of the carriageway, and the clock tower housing Big Ben in the background.

Whitehall is a road in the City of Westminster, in central London, which forms the first part of the A3212 road from Trafalgar Square to Chelsea. It is the main thoroughfare running south from the site of the original Charing Cross at the southern end of Trafalgar Square towards Parliament Square. Recognised as the centre of Her Majesty's Government, the street is lined with government departments and ministries; the name "Whitehall" is thus also frequently used as a metonym for British central governmental administration, as well as being a geographic name for the surrounding area.

The name is taken from the vast Palace of Whitehall that occupied the area before its destruction by fire in 1698. Whitehall was originally a wide road that led to the front of the palace. Trafalgar Square was built at its northern extremity in the early 19th century. The southernmost portion between Parliament Square and Downing Street is named Parliament Street. Combined, Parliament Street and Whitehall cover a distance of about 0.6 mile (1 km).

Whitehall is also widely known for a number of memorial statues and monuments, including Britain's primary war memorial, the Cenotaph. 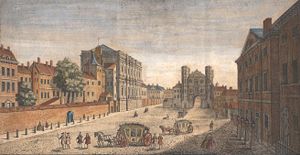 Banqueting House, built in 1622 by Inigo Jones, is the only surviving portion of the former palace. Charles I was executed on 30 January 1649 on a scaffold erected outside the building, stepping onto it from a first-floor window. Royalists commemorate the regicide annually on the anniversary of the execution.

The name "Whitehall" is often used as a metonym to refer to that part of the civil service which is involved in the government of the United Kingdom. 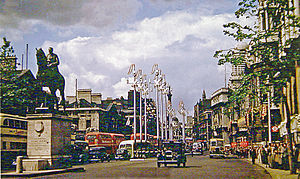 Whitehall, looking north in 1953, with Earl Haig Memorial in the middle of the carriageway.

The central portion of the street is dominated by military buildings, including the Ministry of Defence, with the former headquarters of the British Army and Royal Navy, the Royal United Services Institute, the Horse Guards building and the Admiralty, on the opposite side.

Downing Street leads off the south-west end of Whitehall, just above Parliament Street. It is closed to the public at both ends by security gates erected in 1989.[1] These have since been supplemented by a further gated barrier around 3 metres outside the main gates.

Additional security measures have been put in place along Whitehall for the protection of the government buildings that line the street. This is partly due to a £25 million streetscape project undertaken by Westminster City Council and approved months before the 7 July 2005 London bombings.[2] The project has provided wider pavements, better lighting and hundreds of concrete and steel security barriers.

The Cenotaph, Britain's primary war memorial, is situated in the centre of Whitehall and is the site of the annual ceremonies on Remembrance Sunday.

In 2005 a national Monument to the Women of World War II was erected a short distance north of the Cenotaph in the middle of the Whitehall carriageway.

The road is also home to six other monuments: 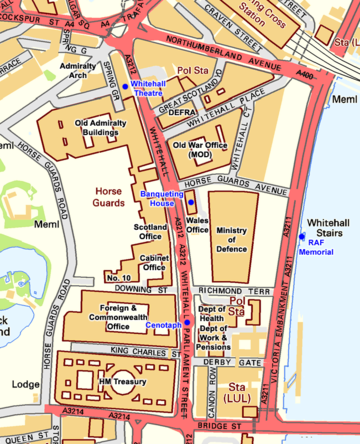 Map of Whitehall and surrounding streets

Government buildings on Whitehall, from north to south, include: