From Infogalactic: the planetary knowledge core
Jump to: navigation, search
This article is about the college in Spokane. For the defunct women's college in Mississippi, see Whitworth Female College. 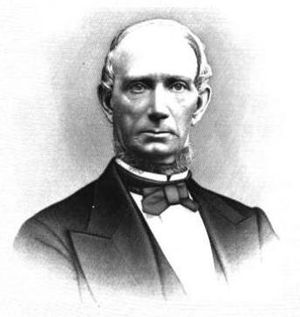 George F. Whitworth around the time he founded the college

Whitworth University is a private Christian liberal arts college located in Spokane, Washington, United States, that offers bachelor's and master's degrees in a variety of academic disciplines. The university, which has an enrollment of nearly 3,000 students, offers 60 undergraduate and graduate programs.[6]

In 1883 founder George F. Whitworth established the Sumner Academy in Sumner, a small town in Washington Territory.  The school was incorporated in 1890 as Whitworth College.  In 1899, the college moved to Tacoma.  When a Spokane developer offered land just before World War I, the college moved once more. In September 1914 classes were held for the first time in Spokane. In 1942, Whitworth merged with Spokane Junior College when the latter shut down due to financial difficulties during World War II.[7] The board of trustees voted to change the institution's name to Whitworth University in 2006, which became effective July 1, 2007.[8]

There are 10 residence halls for undergraduate students[9]

In addition to its 10 residence halls, Whitworth sponsors a variety of theme houses each year.[10]

Resident Assistants in each dorm hold "prime time" every night from 8 p.m. to 10 p.m., which is a time for students to escape the books and relax, play games or partake in some other activity.[12]

Other members of residence hall leadership who are unique to Whitworth include Cultural Diversity Advocates (CDA), who encourage students to value individual differences and respect the diverse opinions and cultures of all residents and Small-Group Coordinators (SGC), who lead prayer groups and other programs to nurture the spiritual well-being of residents. Each residence hall is also served by a Hall Senator, who represents the needs of the hall in the larger student government. [14]

The Whitworth men's basketball team has a history of successful seasons since Warren Friedrichs was hired as the head coach in 1986. During his tenure, Whitworth won five conference titles, appeared in the NAIA Div. II national tournament three times, and led the Pirates to the 1996 national championship game, where they fell in overtime to Albertson College (now known as College of Idaho). Friedrichs was named the conference coach of the year five times and NAIA Div. II National Coach of the Year in 1996.

After Friedrichs announced his retirement from coaching basketball in 2000, Whitworth hired Jim Hayford who built the Pirates into a consistent national power. Hayford led the Pirates to eight 20-win seasons, six appearances in the NCAA Div. III Tournament (2007–2011), five Northwest Conference titles (2003, 2007, 2008, 2010, 2011), three NCAA Div. III Sweet 16 appearances (2008, 2010, 2011) and one Elite Eight appearance (2011).[citation needed] The 2011 team reached No. 1 in the national polls twice, including the final poll of the regular season, but still were not selected as a campus host for the NCAA Div. III tournament past the second round. Instead the Pirates had to travel to Ohio where they were eventually beaten in the Elite Eight. The 2010–11 team also featured Michael Taylor, who was named the NCAA Div. III National Player of the Year.

Hayford was named Northwest Conference Coach of the Year five times and was named National Association of Basketball Coaches as the West Region Coach of the Year twice (2010, 2011) and coached two West Region Players of the Year (Nate Montgomery in 2010 and Michael Taylor in 2011). During Hayford's tenure, Whitworth also accumulated a 217–57 record (.792 winning percentage) and was home to six NWC MVP's during the 2000s (Bryan DePew in 2003, Lance Pecht, Bryan Williams in 2007, Ryan Symes in 2008, Nate Montgomery in 2010, Michael Taylor in 2011).

After the 2011 season Hayford left Whitworth to coach at NCAA Div. I Eastern Washington University. He was replaced by Matt Logie, who grew up in Mercer Island, Wash., before attending Lehigh University where he played and eventually coached as the top assistant.

Logie picked up where Hayford left off, winning Northwest Conference regular season and conference tournament in each of his first five seasons. Additionally, Logie became the first head coach in Div. III history to reach the 100-win plateau in only his fourth year as a head coach. In 2015, the Pirates again ascended to No. 1 in the Div. III polls. Logie has been named NWC Coach of the Year twice (2012, 2014), has taken the Pirates to the Div. III national tournament in each of his five years and to the Sweet Sixteen twice (2012, 201

The 2006 Pirate football team had an 11–1 record, its best ever[18] finished the season ranked 9th in the nation, and made it to the second round of the NCAA Division III playoffs. Tight end Michael Allan was a top scorer in the year and later was drafted to the NFL Kansas City Chiefs.

Tully resigned at the conclusion of the 2013 season, and Whitworth replaced him with former Wheaton College defensive coordinator, Rod Sandberg.

In 2014 new Head Coach Rod Sandberg led the Pirates to a 6–4 record in his first season at Whitworth.

Schwarz has built a powerhouse program at Whitworth, sweeping the Northwest Conference men's and women's title in 2001 and 2015. The Pirate men have won six straight NWC championships and seven in the last eight years. Over the last ten seasons more than 60 athletes per year (over 75% of the team) have qualified for the NWC championship meet. And over the last 13 years Schwarz coached Kristin Shields to a national championship in the 100 meter dash in 2004, and two time national champions Emmanuel Bofa (800 meters) and Cody Stelzer (High Jump) in 2008 and 2009. Coach Schwarz added his sixth national champion with Carter Comito winning back-to-back-to-back national titles in the men’s discus in 2011, 2012 and 2013. This past spring (2015) Kerry Wright claimed her own national title in the women's javelin throw.

With a smaller, more committed group of student-athletes, the level of excitement at practice is high, leading to a national championship caliber program. Whitworth finished fourth in the inaugural Al Carius Men’s Program of the Year award that was based on the team’s overall finish at the NCAA DIII cross country, indoor and outdoor Track & Field national championships in 2008–09. The men’s team finished 9th in the Al Carius Program of the Year standings in 2011. The Pirate program was also honored as the Scholar Team of the Year in 2008 and 2009 which is based on team overall GPA and national team finishes.[19]