From Infogalactic: the planetary knowledge core
Jump to: navigation, search
This article is about the World War II documentary film series. For other uses, see Why We Fight (disambiguation). 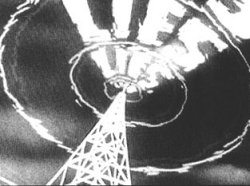 Why We Fight is a series of seven documentary films commissioned by the United States government for propaganda during World War II whose purpose was to show American soldiers the reason for U.S. involvement in the war. Later on they were also shown to the general U.S. public to persuade them to support American involvement in the war.

Most of the films were directed by Frank Capra, who was daunted yet impressed and challenged by Leni Riefenstahl's propaganda film Triumph of the Will and worked in direct response to it. The series faced a tough challenge: convincing a recently non-interventionist nation of the need to become involved in the war and ally with the Soviets, among other things. In many of the films, Capra and other directors spliced in Axis powers propaganda footage going back twenty years, and re-contextualized it so it promoted the cause of the Allies.

Why We Fight was edited primarily by William Hornbeck, although some parts were re-enacted "under War Department supervision" if there was no relevant footage available. The animated portions of the films were produced by the Disney studios – with the animated maps following a convention of depicting Axis-occupied territory in black.

Purpose of films as war information 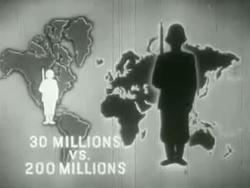 War Comes To America demonstrates America's hopeless position in the event of an Axis victory in Eurasia.

Director Frank Capra enlisted shortly after the Japanese attack on Pearl Harbor. He was assigned to work directly under Chief of Staff George C. Marshall, the most senior officer in command of the Army, who would later create the Marshall Plan and be awarded a Nobel Peace Prize. Marshall felt that Signal Corps was incapable of producing "sensitive and objective troop information films." One colonel explained the importance of these future films to Capra:

You were the answer to the General's prayer… You see, Frank, this idea about films to explain "Why" the boys are in uniform is General Marshall's own baby, and he wants the nursery right next to his Chief of Staff's office.[1]

During his first meeting with General Marshall, Capra received his mission:

Now, Capra, I want to nail down with you a plan to make a series of documented, factual-information films—the first in our history—that will explain to our boys in the Army why we are fighting, and the principles for which we are fighting... You have an opportunity to contribute enormously to your country and the cause of freedom. Are you aware of that, sir? [2]

Shortly after his meeting with General Marshall, Capra viewed Leni Riefenstahl's "terrifying motion picture," Triumph of the Will. Capra describes the film as "the ominous prelude of Hitler's holocaust of hate. Satan couldn't have devised a more blood-chilling super-spectacle. … Though panoplied with all the pomp and mystical trappings of a Wagnerian opera, its message was as blunt and brutal as a lead pipe: We, the Herrenvolk, are the new invincible gods!"[3][page needed]

According to Capra, Triumph of the Will "fired no gun, dropped no bombs. But as a psychological weapon aimed at destroying the will to resist, it was just as lethal." Capra at this point had no assistants or facilities, and he began to see his assignment as overwhelming:

I sat alone and pondered. How could I mount a counterattack against Triumph of the Will; keep alive our will to resist the master race? I was alone; no studio, no equipment, no personnel.[3][page needed]

Capra made his primary focus the creation of "one basic, powerful idea" that would spread and evolve into other related ideas. Capra considered one important idea that had always been in his thoughts:

I thought of the Bible. There was one sentence in it that always gave me goose pimples: "Ye shall know the truth, and the truth shall make you free."[3]

As a result, his goal became to "let the enemy prove to our soldiers the enormity of his cause—and the justness of ours." He would compile enemy speeches, films, newsreels, newspaper articles, with a list of the enemy's hostile actions. He presented his ideas to other officers now assigned to help him:

I told them of my hunch: Use the enemy's own films to expose their enslaving ends. Let our boys hear the Nazis and the Japs shout their own claims of master-race crud—and our fighting men will know why they are in uniform.[3]

Peterson and I walked away on air. We had found the great cache of enemy films—and it was ours![3] 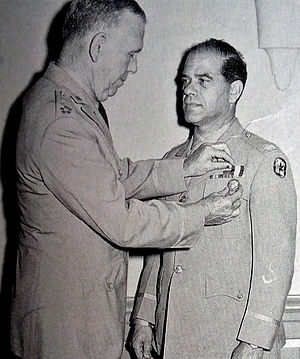 Made from 1942 to 1945, the seven films range from 40 to 76 minutes in length, and all are available on DVD or online at no cost, since they have always been public domain films produced by the U.S. government. The films were directed by Academy Award-winning director Frank Capra and narrated by Academy Award winning actor Walter Huston. The music for the series was performed by the Army Air Force Orchestra.[12]

The films employed a great deal of stock footage, including enemy propaganda (such as the Nazi's Triumph of the Will) recontextualized to discredit its creators. Other scenes were performed. Animation for the series was produced by Disney Studios. The quotation ending each film—"The victory of the democracies can only be complete with the utter defeat of the war machines of Germany and Japan—is from the Army Chief of Staff George Marshall.

Film as medium of choice to present war information

After World War I the methods used to gain support from troops and civilians needed to change. Giving speeches to both soldier recruits and the American public was no longer effective. Film became the medium of choice to inform American soldiers and recruits about why fighting was necessary.[13] As Kathleen German states, “this was the first massive attempt to influence opinion in the U.S. military” through film.[14] Film was also chosen because it combined the senses of sight and hearing, giving it an advantage over radio or print.[15] Capra, who had no experience in documentary films, was chosen because “of his commitment to American ideals” and because of the popularity of some of his earlier feature films. He was thought “to understand the heart and soul of American audiences.”[13] Once the documentary series was completed, it was said to contain the “Capra touch.”[16]

The series' appeal was furthered by how the film was edited. “Throughout his career Capra depended upon his skill as an editor to achieve the contrast of the individual and the group, critical in the success of his Hollywood movies.”[17] Capra thought it would be most effective to use the enemy’s original film and propaganda in the series in order to expose the enemies with their own images. By taking pieces of the enemy material to edit together and placing his own narration over the results, Capra gave meaning and purpose to the war with added narrative.[18] This “parallel editing”[19] created an “us vs. them” image by re-framing and showing clips out of their original order and context.

Through such careful editing, the films compare and contrast the forces of evil with America and its traditional values. Capra highlighted the differences between America and the enemy and showed how the enemy would attack these values if “we” did not fight.[20][page needed] This worked to create a battle not only between Allies and the Axis Powers but between good and evil. Capra treated it as a matter of showing the enormity of the Axis cause and the justness of the Allied.[21] In order to justify the Western Allies' alliance with the Soviet Union, the series omitted many facts, which could have cast doubts on the "good guy" status of the Soviets, such as the Nazi-Soviet alliance, Soviet invasion of Poland; Soviet occupation of the Baltic States, Winter War and others.[22] Virtually in line with Soviet propaganda, the series was not only screened but widely acclaimed in the Soviet Union. [23] To exonerate the Soviets, the series casts even less important Allies, like the Poles, in the bad light, even repeating Nazi propaganda claims such as the Tuchola Forest myth or false claims about the Polish Air Force being destroyed on the ground.[24]

The Why We Fight series became a heavily used means of presenting information about Axis powers for the American government during World War II. General Surles, the director of the Department of War’s Bureau of Public Relations, had hoped that the series would be effective enough to allow similar kinds of army films to be shown to the general public. [25] Surles saw this goal realized when President Franklin D. Roosevelt watched Prelude to War, the most successful of the seven films. Roosevelt considered this film so important that he ordered it to be distributed in civilian arenas for public viewing.[18] However, some objections were raised against the Why We Fight series because it was so persuasive. Lowell Mellett, the coordinator of government films and aide to Roosevelt, saw the films as dangerous. He was most concerned with the effect the series would have after the war was over and the “hysteria” the films would create in their wake.[25] At least 54 million Americans had seen the series by the end of the war, and studies were done to gauge the impact of the films. However, the results were inconclusive, and therefore the effectiveness of the series is still in question.[26]

Prelude to War and The Battle of China refer several times to the Tanaka Memorial, portraying it as "Japan's Mein Kampf" to raise American morale for a protracted war against Japan. The authenticity of this document remains a topic of historical debate. Even though its authenticity has been called into question by some today, the Tanaka Memorial was widely accepted as authentic in the 1930s and 40s because Japan's actions corresponded so closely to these plans.

In 2000 the United States Library of Congress deemed the films "culturally significant" and selected them for preservation in the National Film Registry. Created by the U.S. Army Pictorial Services, the films are in the public domain; all of them are available for download at the Internet Archive.