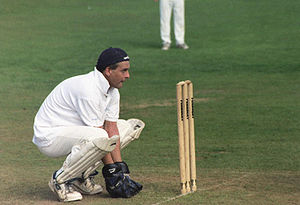 A wicket-keeper in characteristic squatting position, ready to face a delivery. This keeper is positioned close to the wicket, for a slow pace bowler or spin bowler 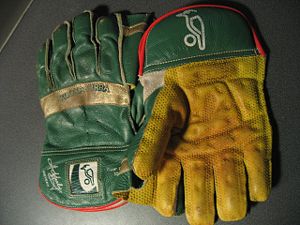 A pair of wicket-keeping gloves. The webbing which helps the keeper to catch the ball can be seen between the thumb and index fingers.

It is essentially a specialist role although a keeper is occasionally called upon to bowl, in which case another member of the fielding side temporarily keeps wicket. The role of the keeper is governed by Law 40 of the Laws of Cricket.[1] 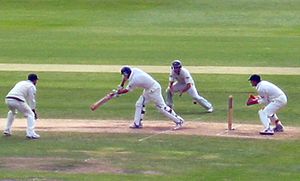 Adam Gilchrist of Australia standing up to the stumps against England during the fourth test of the 2005 Ashes series in England.

Initially, during the bowling of the ball the wicket-keeper crouches in a full squatting position but partly stands up as the ball is received. Australian wicket-keeper Sammy Carter (1878 to 1948) was the first to squat on his haunches rather than bend over from the waist (stooping).[3]

The keeper's major function is to stop deliveries that pass the batsman (in order to prevent runs being scored as 'byes'), but he can also attempt to dismiss the batsman in various ways:

A keeper's position depends on the bowler: for fast bowling he will squat some distance from the stumps, in order to have time to react to edges from the batsman, while for slower bowling, he will come much nearer to the stumps (known as "standing up"), to pressure the batsman into remaining within the crease or risk being stumped. The more skilled the keeper, the faster the bowling to which he is able to "stand up", for instance Godfrey Evans often stood up to Alec Bedser.[4]

Wicket-keeping is a specialist discipline and it requires training consistent with the level expected of a specialist batsman or bowler. However, the modern-day keeper is also expected to possess reasonable batting skill, suiting him for the middle order at least. Wicket-keepers who are also capable of batting at the top of the order are known informally as keeper/batsmen.

Since there is only room for one keeper in a cricket side, selectors (especially at the international level) are often faced with a difficult choice between two or more skilled keepers. Often, one of the two keepers is an exceptional keeper, but only an average batsman, whereas the other is a keeper/batsman who is clearly better at batting, but not quite as good a keeper as his rival. One such selection dilemma was that faced by England selectors in the 1990s between Jack Russell (the pure keeper) and Alec Stewart (the keeper/batsman). They were never able to consistently choose between the two until 1998, when Russell began to fade: prior to that, they had regularly swapped the role, often with Stewart maintaining his place when not wicket-keeping thanks to his batting skill.

The keeper may also have a captaincy role. Uniquely, they are usually involved in every delivery of an innings, and may be in a position to see things that the captain misses. They can frequently be heard encouraging the bowler, and may also indulge in the practice (not meant to be overheard) of "sledging" the batsman with well timed comments about their skill, appearance or personal habits.

The keeper is the only fielder allowed to touch the ball with protective equipment, typically large padded gloves with webbing between the index finger and thumb, but no other webbing. The protection offered by the gloves is not always adequate. The England keeper Alan Knott sometimes placed steaks inside his gloves for added cushioning. Wicket-keepers also tend to wear leg pads and a box to protect the groin area.

Wicket-keepers are allowed to take off their pads and bowl, though this rarely happens but is not uncommon when matches are drifting to draws or a bowling team is desperate for a wicket. Two keepers have removed their pads and taken hat-tricks in first-class cricket: Probir Sen for Bengal v Orissa at Cuttack in 1954–55 and A.C. (Alan) Smith for Warwickshire v Essex at Clacton in 1965; Smith was a most unusual player in that he was primarily a wicket-keeper, but was sometimes selected as a frontline bowler. 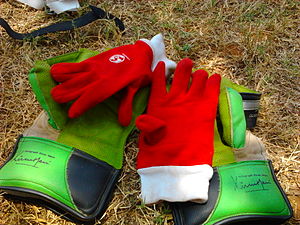 Wicket keeping gloves along with the inner gloves

Law 40.2, which deals with the specifications for wicketkeepers' gloves, states that: If,.... the wicket-keeper wears gloves, they shall have no webbing between the fingers except joining index finger and thumb, where webbing may be inserted as a means of support. If used, the webbing shall be:

(a) a single piece of non-stretch material which, although it may have facing material attached, shall have no reinforcements or tucks.

(b) such that the top edge of the webbing-

(ii) is taut when a hand wearing the glove has the thumb fully extended.[5]

According to Law 2 of the Laws of Cricket, a substitute (taking the place of an ill or injured player) may not keep wicket.[6]

This rule is sometimes suspended, by agreement with the captain of the batting side, although Law 2 does not provide for such agreement to be made. For example, during the England–New Zealand Test Match at Lord's in 1986, England's specialist keeper, Bruce French was injured during England's first innings. England then used 4 keepers in New Zealand's first innings: Bill Athey kept for the first two overs; 45-year-old veteran Bob Taylor was pulled out of the sponsor's tent to keep, immaculately, for overs 3 to 76; Bobby Parks, the Hampshire keeper, was called up for overs 77 to 140; and Bruce French kept wicket for the final ball of the innings.[7] The same two teams were involved in a wicketkeeper switch in 2015 when BJ Watling was injured, and his gloves was given to Tom Latham (cricketer) for the entire 2nd innings. In the second Test, however, both were relieved of their wicketkeeping duties, allowing Luke Ronchi to make his Test debut, having played many matches for both Australia and New Zealand. New Zealand also used 4 wicketkeepers for the 2nd Test, even when Brendon McCullum has given up wicket-keeping completely since 2013.

Playing without a wicket-keeper

There is no rule stating a team must play a wicket-keeper.[13] On 5 June 2015 during a T20 Blast game between the Worcestershire Rapids and the Northamptonshire Steelbacks, Worcestershire chose not to play a wicket-keeper in the 16th over of the match.[14] Their keeper, Ben Cox, became an extra fielder at fly slip while spinner Moeen Ali bowled.[14] The umpires consulted with each other and agreed that there was nothing in the rules to prevent it from happening.[15]

The following top 10 wicket-keepers for dismissals in Test cricket.[16]

The following wicket-keepers have taken 200 or more dismissals in one day cricket.[17]

The following top 10 wicket-keepers for dismissals in Twenty20 International cricket.[18]