Wilhelm Frick (12 March 1877 – 16 October 1946) was a prominent German politician of the Nazi Party, who served as Reich Minister of the Interior in the Hitler Cabinet from 1933 to 1943[2] and as the last governor of the Protectorate of Bohemia and Moravia. After the end of World War II, he was tried for war crimes at the Nuremberg Trials and executed.

Frick was born in the Palatinate municipality of Alsenz, then part of the Kingdom of Bavaria, Germany, the last of four children of Protestant teacher Wilhelm Frick sen. (d. 1918) and his wife Henriette (née Schmidt). He attended the gymnasium in Kaiserslautern, passing his Abitur exams in 1896. He went on studying philology at the University of Munich, but soon after turned to study law in Heidelberg and Berlin, taking the Staatsexamen in 1900, followed by his doctorate the next year. Serving as a referendary since 1900, he joined the Bavarian civil service in 1903, working as an attorney at the Munich Police Department. He was appointed a Bezirksamtassessor in Pirmasens in 1907 and became acting district executive in 1914. Rejected as unfit, Frick did not serve in World War I. He was promoted to the official rank of a Regierungsassessor and, at his own request, re-assumed his post at the Munich Police Department by 1917.

On 25 April 1910, Frick had married Elisabetha Emilie Nagel (1890–1978) in Pirmasens. They had two sons and a daughter. The marriage ended in an ugly divorce in 1934. A few weeks later, on 12 March, Frick remarried in Münchberg to Margarete Schultze-Naumburg (1896–1960), the former wife of the Nazi Reichstag MP Paul Schultze-Naumburg. Margarete gave birth to a son and a daughter.[3] 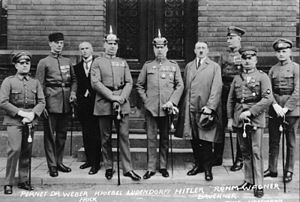 Frick (3rd from left) among the defendants in the Munich Beer Hall Putsch trial, 1924

In Munich, Frick witnessed the end of the war and the German Revolution of 1918–1919. He sympathized with Freikorps paramilitary units fighting against the Bavarian government of Premier Kurt Eisner. Chief of Police Ernst Pöhner introduced him to Adolf Hitler, whom he helped willingly with obtaining permissions to hold political rallies and demonstrations.

Elevated to the rank of an Oberamtmann and head of the Kriminalpolizei security service from 1923, he and Pöhner participated in Hitler's failed Beer Hall Putsch on 9 November. Frick tried to suppress the State Police's operation, wherefore he was arrested and imprisoned, and tried for aiding and abetting high treason by the People's Court in April 1924. After several months in custody, he was given a suspended sentence of 15 months' imprisonment and was dismissed from his police job. Later during the disciplinary proceedings, the dismissal was declared unfair and revoked, on the basis that his treacherous intention had not been proven. Frick went on to work at the Munich social insurance office from 1926 onwards, in the rank of a Regierungsrat 1st class by 1933.

In the aftermath of the Putsch, Wilhelm Frick was elected a member of the German Reichstag parliament in the federal election of May 1924. He had been nominated by the National Socialist Freedom Movement, an electoral list of the far-right German Völkisch Freedom Party and the banned Nazi Party. On 1 September 1925, Frick joined the re-established Nazi Party. He associated himself with the radical Gregor Strasser; making his name by aggressive anti-democratic and antisemitic Reichstag speeches, he climbed to the post of the Nazi parliamentary group leader (Fraktionsführer) in 1928.[4]

On 23 January 1930 Wilhelm Frick was appointed State Minister of the Interior and of Education in the coalition government of Thuringia, being the first Nazi to hold any ministerial-level post in pre-Nazi Germany.[5] He exploited his position to dismiss Communist and Social Democratic officials and to replace them with Nazi Party members, wherefore Thuringia's subsidies were temporarily suspended by Reich Minister Carl Severing. Frick also appointed the eugenicist Hans F. K. Günther a professor of social anthropology at the University of Jena, banned several newspapers as well as pacifist drama and film performances like All Quiet on the Western Front based upon the novel by Erich Maria Remarque. He was removed from office by a Social Democratic motion of no confidence in the Thuringian Landtag parliament on 1 April 1931. 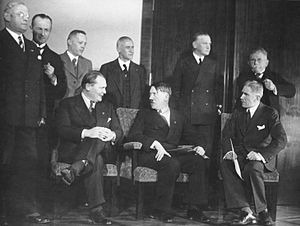 Press session after the first meeting of Hitler's cabinet on 30 January 1933: Frick standing 4th from left

When Reich president Paul von Hindenburg appointed Hitler chancellor on 30 January 1933, Frick joined his government as Reich Minister of the Interior. Together with Reichstag Speaker Hermann Göring, he was one of only two Nazi Reich Ministers in the original Hitler Cabinet, and the only one who actually had a portfolio; Göring served as minister without portfolio until 5 May. Though Frick held a key position, especially in organizing the federal elections of March 1933, he initially had far less power than his counterparts in the rest of Europe. Notably, he had no authority over the police; in Germany law enforcement has traditionally been a state and local matter. Indeed, the main reason that Hindenburg and Franz von Papen agreed to give the interior ministry to the Nazis was that it was almost powerless at the time. A mighty rival arose in the establishment of the Propaganda Ministry under Joseph Goebbels on 13 March.

Frick's power dramatically increased as a result of the Reichstag Fire Decree and the Enabling Act of 1933. He was responsible for drafting many of the Gleichschaltung laws that consolidated the Nazi regime.[6] Within a few days of the Enabling Act's passage, Frick helped draft a law appointing Reichskommissare to disempower the state governments. Under the Law for the Reconstruction of the Reich, which converted Germany into a highly centralized state, the newly implemented Reichsstatthalter (state governors) were directly responsible to him. In May 1934, he was appointed Prussian State Minister of the Interior under Minister-President Göring. By 1935, he also had near-total control over local government. He had the sole power to appoint the mayors of all municipalities with populations greater than 100,000 (except for the city states of Berlin and Hamburg, where Hitler reserved the right to appoint the mayors for himself). He also had considerable influence over smaller towns as well; while their mayors were appointed by the state governors, as mentioned earlier the governors were responsible to him. 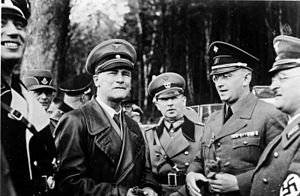 Frick (2nd from left) with Konrad Henlein on visit in Sudetenland, 1938

Frick was instrumental in the racial policy of Nazi Germany drafting laws against Jewish citizens, like the "Law for the Restoration of the Professional Civil Service" and the notorious Nuremberg Laws in September 1935.[4] Already in July 1933, he had implemented the Law for the Prevention of Hereditarily Diseased Offspring including forced sterilizations, which later culminated in the killings of the Action T4 "euthansia" programme supported by his ministry. Frick also took a leading part in Germany's re-armament in violation of the 1919 Versailles Treaty. He drafted laws introducing universal military conscription and extending the Wehrmacht service law to Austria after the 1938 Anschluss, as well as to the "Sudetenland" territories of the First Czechoslovak Republic annexed according to the Munich Agreement.[7]

In the summer 1938 Frick was named the patron (Schirmherr) of the Deutsches Turn- und Sportfest in Breslau, a patriotic sports festival attended by Hitler and much of the Nazi leadership. In this event he presided the ceremony of "handing over" the new Nazi Reich Sports League (NSRL) standard to Reichssportführer Hans von Tschammer und Osten, marking the further nazification of sports in Germany.[8] On 11 November 1938, Frick promulgated the Regulations Against Jews' Possession of Weapons.

From the mid-to-late 1930s Frick lost favour irreversibly within the Nazi Party after a power struggle involving attempts to resolve the lack of coordination within the Reich government.[9] For example, in 1933 he tried to restrict the widespread use of "protective custody" orders that were used to send people to concentration camps, only to be begged off by Reichsführer-SS Heinrich Himmler. His power was greatly reduced in June 1936 when Hitler named Himmler chief of all German police. Although Frick was nominally his superior, Himmler's appointment as Reich police chief effectively united the police with the SS and hence independent of Frick's control as minister of the Interior, since the SS was responsible only to Hitler.[10] A long-running power struggle between the two culminated in Frick being replaced by Himmler as Minister of the Interior in 1943. However, he remained in the cabinet as a minister without portfolio. Besides Hitler, he and Lutz Graf Schwerin von Krosigk were the only members of the Third Reich's cabinet to serve continuously from Hitler's appointment as Chancellor until his death.

Frick's replacement as Reich Minister of the Interior did not reduce the growing administrative chaos and infighting between party and state agencies.[11] Frick was then appointed as Protector of Bohemia and Moravia, making him Hitler's personal representative in the Czech Lands. Its capital Prague, where Frick used ruthless methods to counter dissent, was one of the last Axis-held cities to fall at the end of World War II in Europe.[12] 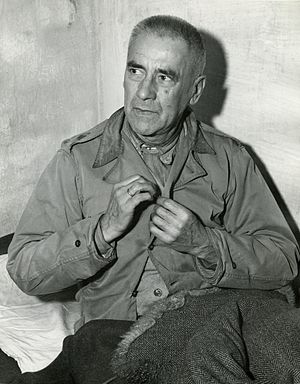 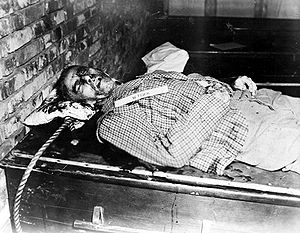 The corpse of Frick after his execution at Nuremberg, 1946

Frick was arrested and tried before the International Military Tribunal at Nuremberg, where he was the only defendant besides Rudolf Hess who refused to testify on his own behalf.[13] For his role in formulating the Enabling Act as Minister of the Interior, the later Nuremberg Laws (as co-author with Wilhelm Stuckart), that led to people under those laws being sent to German concentration camps, Frick was convicted of planning, initiating and waging wars of aggression, war crimes and crimes against humanity. Frick was also accused of being one of the highest persons responsible for the existence of the concentration camps.[7]

Wilhelm Frick was sentenced to death on 1 October 1946, and was hanged on 16 October. Of his execution, journalist Joseph Kingsbury-Smith wrote:

The sixth man to leave his prison cell and walk with handcuffed wrists to the death house was 69-year-old Wilhelm Frick. He entered the execution chamber at 2.05 am, six minutes after Rosenberg had been pronounced dead. He seemed the least steady of any so far and stumbled on the thirteenth step of the gallows. His only words were, "Long live eternal Germany," before he was hooded and dropped through the trap.[14][15]