Wilhelm Stuckart (16 November 1902 – 15 November 1953) was a German Nazi Party lawyer, official and a state secretary in the Reich Interior Ministry during the Nazi era.[1]

Stuckart was born in Wiesbaden, the son of a railway employee.[2] He had a Christian upbringing. Stuckart was active in the far right early on, and joined the Freikorps von Epp in 1919 to resist the French occupation of the Ruhr.[2] In 1922 he started studying law and political economy at the universities of Munich and Frankfurt am Main, and joined the Nazi Party in December that year; he remained a member until the party was banned after the failed putsch of 1923.[2] In order to support his parents, Stuckart had to abandon his studies temporarily and work in the Nassau Regional Bank in Frankfurt in 1924.[2] He finished his studies in 1928, receiving a doctorate with a thesis entitled Erklärung an die Öffentlichkeit, insbesondere die Anmeldung zum Handelsregister ("Explanations to the Public, Especially Concerning the Enrollment to the Trade Register"); he passed the bar examination in 1930.[3]

From 1930 Stuckart served as a district court judge.[3] It was during this period he renewed his association with the NSDAP and provided party comrades with legal counseling.[3] He, however, did not rejoin the party immediately, as judges were prohibited from being politically active.[3] To circumvent this restriction, Stuckart's mother joined the party for him, as member number 378,144.[3] From 1932 to 1933 he worked as a lawyer and legal secretary for the SA in Stettin, Pomerania.[3] Stuckart was a member of the SA from 1932 onward, and after the recommendation of Himmler, joined the SS on 16 December 1933 (member number 280,042), eventually reaching the rank of SS-Obergruppenführer in 1944.[3]

Stuckart's quick rise in the German state administration was unusual for a person of modest background, and would have been impossible without his long dedication to the Nazi cause.[4] On 4 April 1933 he became the Mayor and State Commissioner in Stettin and was also elected to the state parliament and the Prussian council of state.[3] On 15 May 1933 Stuckart was appointed Ministerial Director of the Prussian Ministry of Education and the Arts, and on 30 June 1933 he was made a State Secretary.[3] In 1934, Stuckart was intimately involved in the dubious acquisition of the Guelph Treasure of Brunswick (the "Welfenschatz") – a unique collection of early medieval religious precious metalwork, at that time in the hands of several German-Jewish art dealers from Frankfurt, and one of the most important church treasuries to have survived from medieval Germany – by the Prussian State under its Prime Minister Hermann Göring.[5] Disagreements with his superior led Stuckart to leave the Ministry and move to Darmstadt, where he worked for a few weeks as the president of the superior district court.[3] On 7 March 1935, Stuckart began serving in the Reich Ministry of Interior, Division I, with the responsibility for constitutional law, citizenship and racial laws.[3] In this position he was given the task of co-writing together with Bernhard Lösener and Franz Albrecht Medicus the anti-Semitic Law for the Protection of German Blood and German Honour and The Reich Citizenship Law, together better known as the Nuremberg Laws, which were imposed by the Nazi-controlled Reichstag on 15 September 1935.[3]

On 18 August 1939, Stuckart signed a confidential decree regarding the "Reporting Obligations of Deformed Newborns," which became the basis for the Nazi regime's euthanasia of children.[6] Two years later, Stuckart's own one-year-old son, Gunther, who was born with Down syndrome, became a victim of this programme.[7]

As a legal theorist

A prolific writer, Stuckart came to be seen as one of the leading Nazi legal experts, focusing especially on racial laws and public administration. In 1936 Stuckart, as the chairman of the Reich Committee for the Protection of German Blood,[3] together with Hans Globke co-authored the government's official Commentary on German Racial Legislation in elaboration of the Reich Citizenship and Blood Protection Laws.[8] The commentary explains that the laws were based on the concept of Volksgemeinschaft ("People's community") to which every German was bound by common blood.[8] The individual was not a member of society, a concept viewed by the Nazi legal theorists as a Marxist one, but a born member of the German Volk, through which he or she acquires rights.[8] Interests of the Volk were to always override those of the individual.[8] People born outside of the Volk were seen to possess no rights, and in fact to represent a danger to the purity of the people's community.[8] As such, anti-miscegenation legislation was justified, even necessary.[8] Stuckart stated that these laws represented "a preliminary solution of the Jewish question".[3]

In October 1939 Stuckart was given the task of investigating the comprehensive rationalization of the state administrative structure by decentralisation and simplification.[4] The streamlining was to especially concern the field administration, which was to undergo extensive unification, preferably leading to a model of a small Interior Ministry supervising a single system of field agencies fielding wide local powers.[4] Stuckart proposed that the state and party should effectively be combined in an overarching concept of the Reich, and co-operate at the highest levels of power, so that ground-level friction between the institutions could be solved by referencing upwards.[9] The transformation of the state administration from a technical apparatus for the application of norms to a means of political leadership was the central idea in Stuckart's model: the ideal Nazi civil servant was not to be a passive lawyer of the bygone "liberal constitutional state", but a "pioneer of culture, coloniser and political and economic creator".[9] The administrative structure of the Reichsgaue, where the party and state authorities were combined and the Gauleiter fielded almost dictatorial powers over his domain, reflected Stuckart's theorization.[4] 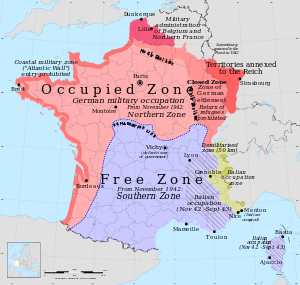 A memorandum written on 14 June 1940 by Stuckart or someone in his vicinity in the Interior Ministry discusses the annexation of certain areas in Eastern France to the German Reich.[10] The document presents a plan to weaken France by reducing the country to its late mediaeval borders with the Holy Roman Empire and replacing the French populace of the annexed territories by German settlers.[10] This memorandum formed the basis for the so-called "north-east line" (also called the "black line" and the "Führer line"[11]) drawn in the occupied French territories after the Second Armistice at Compiègne, which stretched from the mouth of the River Somme to the Jura Mountains (see map).[10] Because of the historical motivation for the area's Germanisation, cities and regions were to revert to their traditional German names. Nancy, for instance, would be known thereafter as Nanzig, and Besançon as Bisanz.[12] Historian Peter Schöttler refers to this plan as a western equivalent of the Generalplan Ost.[10]

Stuckart later represented Wilhelm Frick, the Interior Minister, at the Wannsee Conference on 20 January 1942, which discussed the imposition of the "Final Solution of the Jewish Question in the German Sphere of Influence in Europe".[3] According to the minutes of the conference, Stuckart supported forced sterilization for persons of "mixed blood" instead of extermination.[13]

Reinhard Heydrich called a follow-up conference on 6 March 1942, which further discussed the problems of "mixed blood" individuals and mixed marriage couples.[14] At this meeting, Stuckart argued that only first degree Mischlinge (persons with two Jewish grandparents) should be sterilized by force, after which they should be allowed to remain in Germany and undergo a "natural extinction".[14][15] He had stated:[14]

I have always maintained that it is extraordinarily dangerous to send German blood to the opposing side. Our adversaries will put the desirable characteristics of this blood to good use. Once the half Jews are outside of Germany, their high intelligence and education level, combined with their German heredity, will render these individuals born leaders and terrible enemies.

Stuckart was also concerned about causing distress to German spouses and children of 'interracial' couples.[15]

Stuckart served briefly as Interior Minister in Karl Dönitz's "Flensburg Government" in May 1945.[16]

After World War II, Stuckart was arrested and tried by the Allies in the Ministries Trial for his role in formulating and carrying out anti-Jewish laws.[17] The court characterized him as an ardent Jew-hater, who was able to pursue his anti-Semitic campaign from the safety of his ministerial office.[17] Former co-worker Bernhard Lösener from Interior Ministry testified that Stuckart had been aware of the murder of the Jews even before the Wannsee Conference.[17] Stuckart's defense argued that his support for the forced sterilization of Mischlinge was in order to prevent or delay even more drastic measures.[17] The court was unable to resolve the question, and sentenced him to time served in April 1949.[17]

After being released from captivity, Stuckart went to work as city treasurer in Helmstedt and then as the manager of the Institute for the Promotion of Economy in Lower Saxony.[17] In 1951 he was tried in a de-Nazification court, classified as a "fellow traveller" (Mitläufer) and fined five hundred marks.[17]

Stuckart was killed on 15 November 1953 near Hanover, West Germany, in a car accident a day before his 51st birthday. There has been widespread speculation that the "accident" was in reality a staged collision targeting Stuckart as a former Nazi involved in Nazi racial and anti-Jewish policies and activities, although nothing has ever been openly admitted by Mossad or other groups known to have been involved in other attacks on former Nazis.[17]

Stuckart held firm opinions concerning racial legislation and administrative organisation.[4] At the Ministries Trial, his personal assistant Hans Globke described him as a "convinced Nazi", whose political faith weakened as time went on.[4] From May 1940 onward Stuckart made a number of requests to be released from his job to military service in the Wehrmacht, but these were turned down personally by Hitler.[4]

Wilhelm Stuckart is portrayed by actor Peter Fitz in the 1984 German film and by actor Colin Firth in the 2001 film.