William Bart "Bill" Saxbe (/ˈsæks.biː/; June 24, 1916 – August 24, 2010) was an American politician affiliated with the Republican Party, who served as the U.S. Senator from Ohio, and was the Attorney General under Presidents Richard M. Nixon and Gerald R. Ford, and as the U.S. Ambassador to India.

At the time of his death, Saxbe was an oldest living Republican Senator and the second-oldest living Senator overall (after Harry F. Byrd, Jr., of Virginia). 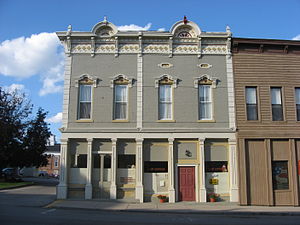 When he returned from World War II, he entered Ohio State University law school. However, while still in law school, he ran for a seat in the Ohio House of Representatives in 1947, and won. In 1948, when Saxbe was near the end of second term, he received a law degree.

In 1957, Saxbe was elected Ohio Attorney General, defeating Democrat Stephen M. Young. He was re-elected three times and held that office until 1968. In this capacity, Saxbe argued the murder case of Doctor Sam Sheppard before the United States Supreme Court in 1966. He went up against Sheppard's attorney F. Lee Bailey.

He was a member of the Ohio Crime Commission from 1967 to 1968. In 1968, Saxbe was elected to the U.S. Senate, defeating the Democratic candidate, former Ohio Rep. (1965–67) John J. Gilligan. He served in the Senate until January 4, 1974, when he was appointed U.S. Attorney General by President Nixon.[3] Saxbe was the permanent replacement for Elliot Richardson, who had been fired by Nixon during the "Saturday Night Massacre" at the height of the Watergate scandal. Saxbe took over from Solicitor General Robert Bork, who had served as acting Attorney General following the "Massacre".

There was some minor controversy regarding Saxbe's appointment and the Ineligibility Clause of the Constitution. That provision states that a legislator cannot be appointed to an executive position during the same term that the legislature had voted to increase the salary of said position. Nixon addressed the problem by having Congress reduce the salary of the Attorney General to $35,000,[4] as it was before Saxbe's term in the Senate began. This maneuver had only occurred once before, when Senator Philander C. Knox had been appointed Secretary of State in 1909,[5] and has since become known as the "Saxbe fix". Because there was no perception that anything intentional had been done to benefit Saxbe, the matter was largely ignored.

Gilligan, who had been elected Governor of Ohio in 1970, appointed Howard Metzenbaum to fill out Saxbe's term. Later that year, former astronaut John Glenn, another Democrat, was elected to replace Saxbe.

Saxbe was served as U.S. Attorney General for the first few months of the Presidents Nixon and Ford's Administration, before the stepping down in early 1975, when he was appointed United States Ambassador to India. He served in that capacity until 1977. After that, Saxbe returned to Mechanicsburg and resumed the practice of law.

Saxbe was known for his quips. Asked about Sen. Robert Dole, he commented that Dole was so unpopular with his fellow senators that he "couldn't sell beer on a troop ship."[7]