William Jack Baumol (born February 26, 1922) is an American economist. He is a professor of economics at New York University, Academic Director of the Berkley Center for Entrepreneurship and Innovation, and Professor Emeritus at Princeton University. A prolific author of more than eighty books and several hundred journal articles,[1] Baumol has written extensively about labor market and other economic factors that affect the economy. He also made significant contributions to the theory of entrepreneurship and the history of economic thought. He is among the most influential economists in the world according to IDEAS/RePEc. He was elected a Fellow of the American Academy of Arts and Sciences in 1971.[2] He was considered a candidate for the Nobel Prize in Economics for 2003,[3] and Thompson Reuters in 2014 predicted falsely that he would win in 2014.[4]

He was initially denied entry to the doctoral studies at the London School of Economics and was instead admitted to the Master's program. After witnessing his debating skills at Lord Lionel Robbins' seminars, he was within weeks switched to the doctoral program and also admitted to the faculty as an Assistant Lecturer.[5] His Ph.D. oral exam lasted five hours.[5]

While a professor at Princeton University he supervised some graduate students who would eventually become very well-known economists, including Gary Becker, Burton Malkiel, William G. Bowen, and Harold Tafler Shapiro.[6] 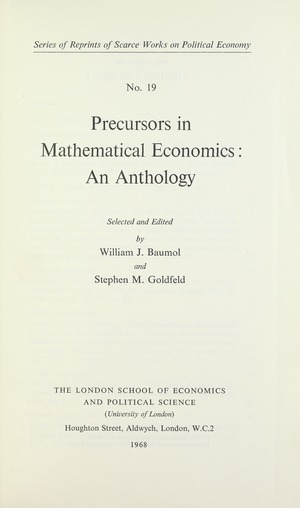 Among his better-known contributions are the theory of contestable markets, the Baumol-Tobin model of transactions demand for money, Baumol's cost disease, which discusses the rising costs associated with service industries, Baumol’s sales revenue maximization model[7] and Pigou taxes.[8][9] His research on environmental economics[10] recognized the fundamental role of non-convexities in causing market failures.[11]

William Baumol was also a major contributor to the transformation of the field of finance, and published contributions to the areas of efficiency of capital markets, portfolio theory, and capital budgeting.[12]

The place of the disharmony-creating and idiosyncratic entrepreneur in traditional economic theory (which describes many efficiency-based ratios assuming uniform outputs) presents theoretic quandaries. William Baumol has added greatly to this area of economic theory. The 2006 Annual Meetings of the American Economic Association held a special session in his name, and honoring his many years of work in the field of entrepreneurship and innovation,[13] where 12 papers on entrepreneurship were presented.[14]

The Baumol Research Centre for Entrepreneurship Studies at Zhejiang Gongshang University is named after William Baumol.[15]

In 2003, Baumol received the Global Award for Entrepreneurship Research[16] "[f]or his persistent effort to give the entrepreneur a key role in mainstream economic theory, for his theoretical and empirical studies of the nature of entrepreneurship, and for his analysis of the importance of institutions and incentives for the allocation of entrepreneurship."[17]

The British magazine, The Economist published an article about William Baumol and his lifelong work to develop a place in economic theory for the entrepreneur (March 11, 2006, pp 68), much of which owes its genesis to Joseph Schumpeter. They note that traditional microeconomic theory holds a place for 'prices' and 'firms' but not for that (seemingly) important engine of innovation, the entrepreneur. Baumol is given credit for helping to remedy this shortcoming: "Thanks to Mr. Baumol's own painstaking efforts, economists now have a bit more room for entrepreneurs in their theories."

William Baumol's book, "The Microtheory of Innovative Entrepreneurship"[18] is the first formal theoretical analysis of the role of innovative entrepreneurs.

Baumol has written several textbooks in economics, including an introductory textbook with Alan Blinder entitled "Macroeconomics: Principles and Policy".[19] His economics textbook on operations research was internationally used:

In the 1960s and 1970s, nearly every economics department offered a course in operations research methods in economics, and the usual textbook used was Economic Theory and Operations Analysis by W. J. Baumol. An entire generation of economics students was familiar with this book ....[20]