From Infogalactic: the planetary knowledge core
Jump to: navigation, search
Not to be confused with son and fellow Nobel Prize winner William Lawrence Bragg.

Sir William Henry Bragg OM KBE PRS [1] (2 July 1862 – 12 March 1942) was a British physicist, chemist, mathematician and active sportsman who uniquely[2] shared a Nobel Prize with his son William Lawrence Bragg – the 1915 Nobel Prize in Physics: "for their services in the analysis of crystal structure by means of X-rays".[3] The mineral Braggite is named after him and his son. He was knighted in 1920.

Bragg was born at Westward near Wigton, Cumberland, the son of Robert John Bragg, a merchant marine officer and farmer, and his wife Mary née Wood, a clergyman's daughter. When Bragg was seven years old, his mother died, and he was raised by his uncle, also named William Bragg, at Market Harborough, Leicestershire. He was educated at the Old Grammar School there, at King William's College on the Isle of Man and, having won an exhibition (scholarship), at Trinity College, Cambridge. He graduated in 1884 as third wrangler, and in 1885 was awarded a first class honours in the mathematical tripos.[4][5][6]

In 1885, at the age of 23, Bragg was appointed (Sir Thomas) Elder Professor of Mathematics and Experimental Physics in the University of Adelaide,[7] and started work there early in 1886. Being a skilled mathematician, at that time he had limited knowledge of physics, most of which was in the form of applied mathematics he had learnt at Trinity. Also at that time, there were only about a hundred students doing full courses at Adelaide, of whom less than a handful belonged to the science school, whose deficient teaching facilities Bragg improved by apprenticing himself to a firm of instrument makers. Bragg was an able and popular lecturer; he encouraged the formation of the student union, and the attendance, free of charge, of science teachers at his lectures.[5][6]

Bragg's interest in physics developed, particularly in the field of electromagnetism. In 1895 he was visited by Ernest Rutherford, en route from New Zealand to Cambridge; this was the commencement of a lifelong friendship. Bragg had a keen interest in the new discovery of Wilhelm Röntgen. On 29 May 1896 at Adelaide, Bragg demonstrated before a meeting of local doctors the application of “X-rays to reveal structures that were otherwise invisible”. Samuel Barbour, senior chemist of F. H. Faulding & Co., an Adelaide pharmaceutical manufacturer, supplied the necessary apparatus in the form of a Crookes tube, a glass discharge tube. The tube had been obtained at Leeds, England, where Barbour visited the firm of Reynolds and Branson, a manufacturer of photographic and laboratory equipment. Barbour returned to Adelaide in April 1896. The tube was attached to an induction coil and a battery borrowed from Sir Charles Todd, Bragg’s father-in-law. The induction coil was utilized to produce the electric spark necessary for Bragg and Barbour to “generate short bursts of X-rays”. The audience was favorably impressed. Bragg availed himself as a test subject, in the manner of Röntgen and allowed an X-ray photograph to be taken of his hand. The image of the fingers in his hand revealed “an old injury to one of his fingers sustained when using the turnip chopping machine on his father’s farm in Cumbria”.[8][9]

Bragg gave a public demonstration of Marconi's wireless in 1897.[10]

The turning-point in Bragg's career came in 1904 when he gave the presidential address to section A of the Australasian Association for the Advancement of Science at Dunedin, New Zealand,[6] on "Some Recent Advances in the Theory of the Ionization of Gases". This idea was followed up "in a brilliant series of researches"[6] which, within three years, earned him a fellowship of the Royal Society of London. This paper was also the origin of his first book Studies in Radioactivity (1912). Soon after the delivery of his 1904 address, some radium bromide was made available to Bragg for experimentation. In December 1904 his paper "On the Absorption of α Rays and on the Classification of the α Rays from Radium" appeared in the Philosophical Magazine, and in the same issue a paper "On the Ionization Curves of Radium", written in collaboration with his student Richard Kleeman, also appeared.[5][6]

At the end of 1908 Bragg returned to England. During his 23 years in Australia "he had seen the number of students at the University of Adelaide almost quadruple, and had a full share in the development of its excellent science school."[5]

Whilst in Adelaide, Bragg played tennis and golf, and as a founding member of the North Adelaide and Adelaide University Lacrosse Clubs, contributed to the introduction of lacrosse to South Australia and was also the secretary of the Adelaide University Chess Association.[11] He also met Gwendoline née Todd, a skilled water-colour painter, whom he married in 1889.[5][6] Their first son, William Lawrence, was born in North Adelaide in 1890 and he taught him at the University of Adelaide. 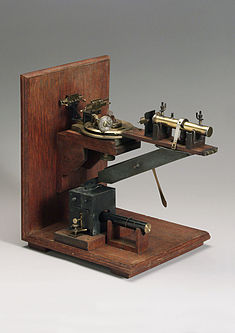 Bragg occupied the Cavendish chair of physics in the University of Leeds from 1909. He continued his work on X-rays with much success. He invented the X-ray spectrometer and with his son, William Lawrence Bragg, then a research student at Cambridge, founded the new science of X-ray crystallography, the analysis of crystal structure using X-ray diffraction.

From 1914, both father and son contributed to the war effort; W.H. Bragg was connected with submarine detection, at Aberdour on Forth and at Harwich, and returned to London in 1918 as a consultant to the admiralty.[5]

In 1915 father and son were jointly awarded[2] the Nobel Prize in Physics for their studies, using the X-ray spectrometer, of X-ray spectra, X-ray diffraction, and of crystal structure. Ten years later, their volume X-Rays and Crystal Structure (1915) had reached a fifth edition.[5]

Bragg was appointed Quain Professor of physics at University College London in 1915, but did not take up his duties there until after World War I. While Quain professor at London he continued his work on crystal analysis.[5]

From 1923 he was Fullerian professor of chemistry at the Royal Institution and director of the Davy Faraday Research Laboratory.[12] This institution was practically rebuilt in 1929–30 and, under Bragg's directorship, many valuable papers were issued from the laboratory.[5] In 1919, 1923 and 1925 he was invited to deliver the Royal Institution Christmas Lecture on The World of Sound; Concerning the Nature of Things and Old Trades and New Knowledge respectively.

The lecture theatre of King William's College (KWC) is named in memory of Bragg; the Sixth-Form invitational literary debating society at KWC, the Bragg Society, is also named in his memory. One of the school "Houses" at Robert Smyth School, Market Harborough, Leicester, is named "Bragg" in memory of him being a student there. Since 1992, the Australian Institute of Physics has awarded The Bragg Gold Medal for Excellence in Physics for the best PhD thesis by a student at an Australian University. The two sides of the medal contain the images of Sir William Henry and his son Sir William Lawrence Bragg.[13]

In 1889 in Adelaide, W.H. Bragg married Gwendoline Todd, a skilled water-colour painter, and daughter of astronomer, meteorologist and electrical engineer Sir Charles Todd. They had three children, a daughter, Gwendolen and two sons, (William) Lawrence (W.L.) and Robert. Robert was killed in the Battle of Gallipoli. W.H.'s wife Gwendoline died in 1929. W.H. Bragg died in 1942 in England and was survived by his daughter Gwendolen (Mrs. Alban Caroe) and his son, Sir William Lawrence Bragg.

The Experimental Technique Centre at Brunel University is named the Bragg Building.

In 1962, the Bragg Laboratories were constructed at The University of Adelaide to commemorate 100 years since the birth of Sir William H. Bragg.[5]