William Jewell College is a private, four-year liberal arts college of 1,100 undergraduate students located in Liberty, Missouri, U.S. It was founded in 1849 by members of the Missouri Baptist Convention and endowed with $10,000 by William Jewell. Another founder was Robert S. James, a Baptist minister and father of the infamous Frank James and Jesse James. It was associated with the Missouri Baptist Convention for over 150 years until its separation in 2003 and is now an independent institution.

The college is named after Dr. William Jewell, who in 1849 donated $10,000 to start a school. Jewell, who was from Columbia, Missouri, had wanted the school built in Boonville, Missouri. However, Liberty resident Alexander William Doniphan argued that donated undeveloped land in Liberty would be more valuable than the proposed developed land in Boonville, and Liberty was eventually chosen. Judge J.T.V. Thompson donated the hilltop land on which the campus sits. In the American Civil War during the Battle of Liberty, the main building on campus, Jewell Hall, was used as a hospital, infirmary, and stables for the United States Army. Union troops were buried on the campus. 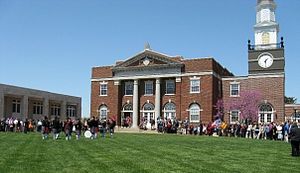 In 1926, the John Gano chapel was built, based on a donation from Gano's great-granddaughter Elizabeth Price, who lived in Kansas City. Price gave the money for the chapel with provisions that the chapel be named for Gano and that it hang a painting of Gano baptizing George Washington in the Potomac River during the American Revolutionary War. The college says the painting is one of the school's most popular tourist destinations and takes no stance on whether the baptism of Washington (who was Episcopalian) actually took place. The story is rejected by many historians who question whether Gano was even stationed with Washington and note there is nothing in his Gano's personal correspondence about the event.[1][2]

Other Gano artifacts in the chapel include a painting depicting Gano leading the troops in a prayer of Thanksgiving in 1783 at the conclusion of the Revolutionary war and a sword that Washington was said to have given Gano (which in turn had been given to Washington by Gilbert du Motier, marquis de La Fayette).

The Harriman-Jewell Series, Kansas City’s premier performing arts presenter, was founded in 1965. Co-founder Richard Harriman was instrumental in helping to bring Luciano Pavarotti to campus, where the tenor made his international solo recital debut as part of the Series in 1973. Today, the Series continues to bring world-class music, dance and theatre events to Kansas City. The 2014–2015 season will mark the Series’ 50th anniversary.

In August 2013, William Jewell College opened Pryor Learning Commons, a 26,000 square-foot intellectual center where students gather, learn, and create 24 hours a day. The three-story hub of campus allows for students to work as mature, independent learners, immersing and engaging in their educational experience.

The college offers more than 40 academic majors and 10 pre-professional programs.[5] William Jewell is accredited by the North Central Association of Colleges and Schools.

William Jewell College also provides an Oxbridge Honors Program.[6] Oxbridge majors take tutorials in their major, study abroad in Oxford or Cambridge, and take comprehensive exams during their senior year. The college has also sent many students and professors to the University of Evansville's satellite campus at Harlaxton Manor. The College offers a Journey Grant Program in which students can qualify for a minimum $2,000 grant to use their junior year of school to help create an educational experience like study abroad, leadership and service projects, internships, research, business projects, etc.[7]

The Department of Education started Jewell’s first graduate program in 2014. Exclusively for practicing teachers, the Master of Science of Education in Differentiated Instruction helps teachers increase the effectiveness of their practice as they utilize their own classrooms and students. The program is approved by the Higher Learning Commission and is on the List of Schools Approved for Degree or Certification Earning Programs by the Cooperating School Districts of Greater Kansas City.[9]

William Jewell has enjoyed a number of accolades, most recently including:

The William Jewell Cardinals are the official athletic teams of the college. The college is a member of the National Collegiate Athletic Association (NCAA) at the Division II level and competes in the Great Lakes Valley Conference (GLVC).[15][16] Prior to its transition to the NCAA Division II, the college competed in the National Association of Intercollegiate Athletics (NAIA) as a member of the Heart of America Conference.[16][17]