William Lawrence (June 26, 1819 – May 8, 1899) was a Republican politician from Ohio. He was most noted for being a US Representative, and was influential in attempting to impeach Andrew Johnson, creating the United States Department of Justice, helping to create the American Red Cross, and ratifying the Geneva Convention.

Lawrence was born on June 26, 1819 in Mount Pleasant, Ohio. He attended Tidball's Academy in Knoxville, Tennessee. After teaching at Pennsville and McConnelsville, Ohio, he was graduated in 1838 from Franklin College in New Athens, Ohio. He was then graduated in 1840 from law school at the University of Cincinnati, and was admitted to the bar.[1] In 1873, Lawrence was awarded the LL. D. from Franklin College.[2] 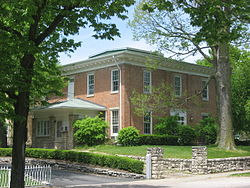 Lawrence's house in Bellefontaine, now listed on the National Register of Historic Places

From 1845 to 1847, Lawrence served as the editor of the Logan Gazette, which later became the Bellefontaine Examiner. During this time, Lawrence was elected as the Logan County Prosecutor (in 1845). He also served as a member of the Ohio House of Representatives, in 1846 and 1847. In 1849, Lawrence was first elected to the Ohio Senate, serving until 1851 when he became the reporter of the Ohio Supreme Court. He returned to the Ohio Senate in 1854. He also served as an editor of Western Law Monthly from 1859 to 1862.[1][2] In 1860 or 1861, Lawrence built a house along North Main Street in Bellefontaine; today, the William Lawrence House remains largely intact and is listed on the National Register of Historic Places.[5]

In 1857, Lawrence was appointed Judge of the Court of Common Pleas and of the District Court, serving until he resigned in 1864. In 1862, he entered the Union Army as colonel of the 84th Ohio Infantry, a three-month regiment. In 1863, Lawrence was appointed to serve as the wartime judge for the United States district court in Florida; however, he declined the appointment.[2]

On March 4, 1865, William Lawrence was inaugurated as the U.S. Representative for the 4th district of Ohio, having been elected to this office the previous November. He served in the Thirty-ninth, Fortieth, and Forty-first Congresses, ending his third term on March 3, 1871.[1] As Representative, Lawrence was among the authors of the bill of impeachment against U.S. President Andrew Johnson in 1868.[6]

Created the Department of Justice

In 1867, as a member of the House Judiciary Committee, Lawrence directed an inquiry into the creation of a "law department" headed by the Attorney General and composed of the various department solicitors and district attorneys. On February 19, 1868, Lawrence authored the bill that ultimately created the United States Department of Justice. However, this first bill died in Congress due to the Congress's (and Lawrence's) concern with the impeachment of President Johnson.

In the following Congress, the issue was brought back to the table. Representative Thomas Jenckes of Rhode Island introduced a bill to create the Department of Justice on February 25, 1870. Though Lawrence did not write this bill, it incorporated many of the ideas from Lawrence's previous bill, and he gave the bill his full support. On June 22, 1870, President Ulysses Grant signed this second bill into law, creating the Department of Justice.[7]

To Bellefontaine, and back to Washington

Returning to Bellefontaine in 1871, Lawrence founded the Bellefontaine National Bank[1] (acquired by Huntington National Bank in 1977[8]), and served as its first president. He returned to Congress in 1873, this time from the 8th Ohio Congressional district. Lawrence served in the Forty-third and Forty-fourth Congresses, and completed his fifth and final term on March 3, 1877. During this service, Lawrence was the chairman of the Committee on War Claims arising from the American Civil War.[1]

The American Red Cross and the Geneva Convention

Lawrence was appointed by President Rutherford B Hayes in 1880 to serve as the First Comptroller of the Treasury, a post he held until 1885. Lawrence then appealed on behalf of Clara Barton to Hayes' successor, James Garfield, to support the creation of the American Red Cross on May 21, 1881. He then served as the organization's first Vice President.[4][9] Lawrence and Barton were also instrumental in persuading the United States to ratify the Geneva Convention in 1882.

In 1891, Lawrence was appointed President of the National Wool Growers Association. He died on May 8, 1899 in Kenton, Ohio. Lawrence is interred at Bellefontaine Cemetery in Bellefontaine, Ohio.[1]