William Maxwell Evarts (February 6, 1818 – February 28, 1901) was an American lawyer and statesman who served as U.S. Secretary of State, U.S. Attorney General and U.S. Senator from New York. He was born in Boston, Massachusetts, the son of Jeremiah Evarts, an author, editor, and Indian removal opponent; and the grandson of Declaration of Independence signer Roger Sherman.

Evarts attended Boston Latin School, graduated from Yale College in 1837, and attended Harvard Law School. While at Yale he became a member of the Linonian Society and the secret society Skull and Bones.[1] Later in life spoke out against such societies, including at the 1873 Yale commencement alumni meeting, claiming they bred snobbishness.[2][3]

Evarts was admitted to the bar in New York in 1841. One of his first cases involved the trial of the infamous forger Monroe Edwards. Evarts served as a junior counsel for the defense, which was headed by Senator John J. Crittenden of Kentucky. Edwards was convicted, but Evarts' handling of his duties earned him notice as a promising lawyer.[4]

He married Helen Minerva Bingham Wardner in 1843. She was the daughter of Allen Wardner, a prominent businessman and banker who served as Vermont State Treasurer. They had 12 children between 1845 and 1862, all born in New York City.

A Whig Party supporter before joining the fledgling Republican Party, Evarts was appointed as an assistant United States district attorney and served 1849–1853. In 1860 he was chairman of the New York delegation to the Republican National Convention where he placed Senator William H. Seward's name in nomination for President. He served on New York's Union Defense Committee during the Civil War. In 1861 Evarts was an unsuccessful candidate for the United States Senate from New York. He was a delegate to the New York state constitutional convention of 1867.

Service in the Johnson, Grant, and Hayes administrations

He was chief counsel for President Andrew Johnson during his impeachment trial. Afterward Evarts was appointed Attorney General following the Senate's refusal to reconfirm Henry Stanbery to the office, from which Stanbery had resigned in order to participate in Johnson's defense. Evarts served as United States Attorney General from July 1868 until March 1869.[5]

In 1872 he was counsel for the United States before the tribunal of arbitration on the Alabama claims in Geneva, Switzerland. Evarts was a founding member of the New York City Bar Association. He served as its first president from 1870 to 1879, the longest tenure of any president. 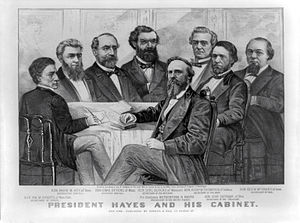 The Hayes Cabinet. Evarts is on the left.

Evarts served as counsel for President-elect Rutherford B. Hayes before the Electoral Commission that resolved the disputed presidential election of 1876. During President Hayes' administration, he was Secretary of State. He was a delegate to the International Monetary Conference at Paris 1881.

Evarts gained the support of state legislators in 1884 for US Senator from New York, and from 1885 to 1891 he served one term. While in Congress (49th, 50th and 51st Congresses), he served as chairman of the U.S. Senate Committee on the Library from 1887 to 1891. He was also a sponsor of the Judiciary Act of 1891 also known as the Evarts Act, which created the United States courts of appeals.[6] As an orator, Senator Evarts stood in the foremost rank, and some of his best speeches were published.

Chair of the American Committee for the Statue of Liberty

Evarts led the American fund-raising effort for the pedestal for the Statue of Liberty, serving as the chairman of the American Committee. He spoke at its unveiling on October 28, 1886. His speech was entitled "The United Work of the Two Republics."

"Taking a breath in the middle of his address, he was understood to have completed his speech. The signal was given, and Bartholdi, together with Richard Butler and David H. King Jr., whose firm built the pedestal and erected the statue, let the veil fall from her face. A 'huge shock of sound' erupted as a thunderous cacophony of salutes from steamer whistles, brass bands, and booming guns, together with clouds of smoke from the cannonade, engulfed the statue for the next half hour."[7]

Senator Evarts retired from public life in 1891 due to ill health. He was still a partner in his law practice in New York City, called Evarts, Southmoyd and Choate. He died in New York City and was buried at Ascutney Cemetery in Windsor, Vermont.

Evarts owned numerous properties in Windsor, Vermont, including Evarts Pond and a group of historic homes often referred to as Evarts Estate. The homes included 26 Main Street in Windsor. Evarts purchased this house from John Skinner in the 1820s for $5,000; it was passed down to his daughter, Elizabeth Hoar Evarts Perkins, who left the house to family members, including her son Maxwell Perkins. The house stayed in the family until 2005. 26 Main Street in Windsor, Vermont was later restored and reopened as Snapdragon Inn. Snapdragon Inn is open to the public and features a library that displays items related to the history of William M. Evarts and his extended family. 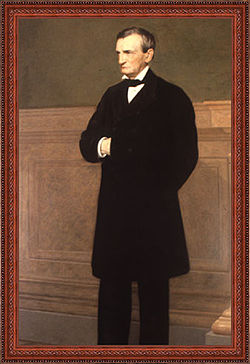 William Evarts was a descendant of the English immigrant John Everts; the family settled in Salisbury, Connecticut in the 17th century.[8] Evarts was a member of the extended Baldwin, Hoar and Sherman families, which had many members in American politics.

Ebenezer R. Hoar, a first cousin of Evarts, was a U.S. Attorney General, Associate Justice of the Supreme Judicial Court of Massachusetts and representative in Congress. The two were best friends, and shared similar professional pursuits and political beliefs. Each served, in succession, as United States Attorney General. Some of Evarts' other first cousins include U.S. Senator and Governor of Connecticut Roger Sherman Baldwin; U.S. Senator from Massachusetts (brother of Ebenezer R.) George F. Hoar; and Sherman Day, California state senator and founding trustee of the University of California.

Son Allen Wardner Evarts graduated from Yale College in 1869. He supported the founding of Wolf's Head Society, and was first president of its alumni association. He held the position for a total of 20 years over two separate terms. He was a law partner, corporate president, and trustee of Vassar College.

Son Maxwell Evarts graduated from Yale College in 1884, where he was also a member of Skull and Bones.[1] He served as a New York City district attorney, and later as General Counsel for E. H. Harriman, which later became the Union Pacific Railroad. He was president of two Windsor, Vermont, banks, and the chief financial backer of the Gridley Automatic Lathe (manufactured by the Windsor Machine Co.). In politics, Maxwell served as a member of the Vermont House of Representatives and was a Vermont State Fair Commissioner.

Great-nephew Evarts Boutell Greene became a historian and was appointed Columbia University's first De Witt Clinton Professor of History in 1923 and department chairman from 1926 to 1939. He was chairman of the Columbia Institute of Japanese Studies 1936–39. He was a noted authority on the American Colonial and Revolutionary War periods.

Great-grandson Archibald Cox served as a U.S. Solicitor General and special prosecutor during President Richard Nixon's Watergate scandal, whereas Evarts defended a U.S. President (Andrew Johnson) in his impeachment trial. In a sense, they both successfully argued their cases, which represent two of the three U.S. Presidential impeachment efforts. An impeachment trial was not held in Nixon's case: Nixon resigned before the House of Representatives acted on the House Judiciary Committee's recommendation that Nixon be impeached.

On March 6, 1943, construction began on a United States Maritime Service liberty ship in Evarts' name. The SS William M. Evarts (hull identification number MS 1038) was launched April 22, 1943, and served during World War II in the European theater. It transported troops and supplies from its home port in Norfolk, Virginia to various ports on the Atlantic and Mediterranean coasts. After World War II, the ship was decommissioned and finally scrapped in 1961.