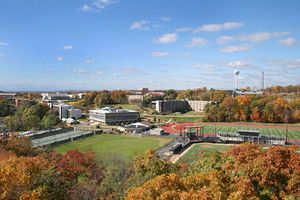 Aerial view of the campus; this picture was taken from the east end of the campus, with WPU's Wightman Field football stadium visible near the foreground.

William Paterson University is located on a 370-acre hilly, wooded campus in northern New Jersey in the suburban town of Wayne. The campus borders on High Mountain Preserve, nearly 1,200 acres (4.9 km2) of wetlands and woodlands, and three miles (5 km) west of the historic Great Falls in Paterson. New York City is 20 miles (32 km) to the east, the Jersey Shore is an hour’s drive south, skiing is 30 miles (48 km) north, and the Meadowlands Sports Complex is a half-hour drive away. 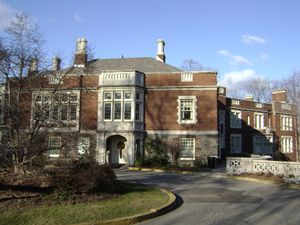 William Paterson University was founded in 1855 as the Paterson City Normal School. For more than a century, training teachers for New Jersey schools was its exclusive mission. In 1951, the University moved to the present campus.[3] Originally known as Ailsa Farms, the site was purchased by the State of New Jersey in 1948 from the family of Garret Hobart, twenty-fourth vice president of the United States.

The original manor house was built in 1877 in the style of a castle, and was the home of John McCullough, a Scottish immigrant who made a fortune in the wool industry.[4] It was later purchased, enlarged and made the weekend retreat and summer residence of the Hobart family. Today the building is known as Hobart Manor and is home of the Office of the President and the Office of Institutional Advancement. Hobart Manor was designated a national and state landmark in 1976. The building is reported to have sightings of ghosts from time to time.

The University changed its name to Paterson State Teachers College when it relocated from Paterson in 1951. In 1966, the curriculum was expanded to include degree offerings other than those leading to a teaching career. In 1971, it was renamed The William Paterson College of New Jersey. The change of name honored William Paterson, who was the state’s first senator, its second governor, and a United States Supreme Court Justice appointed by President George Washington, and reflected both the institution’s beginnings in the city that also bears his name and the legislative mandate to move from a teachers' college to a broad-based liberal arts institution.

Dr. Kathleen Waldron, the former president of Baruch College and a former senior executive at Citigroup, is the seventh president of William Paterson University. She took office August 2, 2010[7] to replace the retiring Arnold Speert,[8] who had served as the school's president since 1985 and oversaw the further expansion of William Paterson's curriculum and campus. 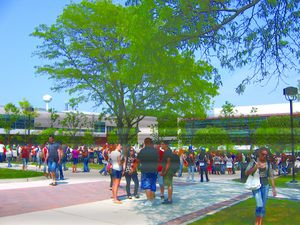 The university is organized into five academic colleges: College of Arts and Communication, Cotsakos College of Business, College of Education, College of Humanities and Social Sciences, and College of Science and Health, offering undergraduate, graduate, and doctoral degrees.

The institution’s faculty includes recipients of awards and grants from the Fulbright Program,[26] the Guggenheim Foundation, the National Endowment for the Humanities, the National Institutes of Health, the National Science Foundation and the American Council of Learned Societies.[27] William Paterson counts 41 Fulbright scholars among its faculty.[28][29][30] 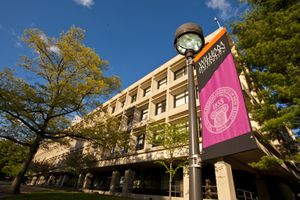 The University provides housing for nearly 2,600 students in ten residence halls, including two that opened in 2006.[40] These newest residence halls, High Mountain East and West, offer learning communities in collaboration with the University’s Honors College, and feature smart classrooms that are used as part of the living/learning experience.[41]

With accommodations ranging from double room suites to apartments, the University’s modern, smoke-free buildings range in size from 100 to 400 students and are coed by suite, with four residents sharing a suite or apartment. First-year students start out in traditional residence halls, while upper-class students and older transfer students experience the added independence of the apartments, Pioneer Hall and Heritage Hall.[42]

William Paterson has been nationally recognized[45] for its alcohol prevention program, which requires freshmen and transfer students to take AlcoholEdu, an online alcohol prevention course to educate students about the consequences of alcohol abuse. In addition, student workers serve as peer health advocates and help to spread the message to their peers about the need to take a responsible approach to alcohol.[46] William Paterson is also an active member in the New Jersey Higher Education Consortium on Alcohol and Other Drug Prevention and Education.[47]

WPSC 88.7 Brave New Radio, William Paterson's award-winning student-run radio station is the headquarters for College Radio Day, an effort to celebrate the importance of college radio. In 2012, more than 500 college radio stations in 20 countries participated in the event.[48]

The University has 13 intercollegiate sports teams in the NCAA Division III, six for men and seven for women, including NCAA teams in men’s baseball and women’s softball.[49] The William Paterson University Pioneers compete in Division III of the National Collegiate Athletic Association (NCAA), as well as in the Eastern College Athletic Conference (ECAC) and the New Jersey Athletic Conference (NJAC).[50] The Faculty Athletic Support Team (FAST) was established in 2013 by the Department of Intercollegiate Athletics, The Office of the Provost, and a number of faculty members, to create a formalized program to enhance communication and serve a resource to assist student-athletes with retention, success and growth.[51]

WP Presents![53] is the University portal to information about performing arts programs produced and presented by the College of The Arts and Communication. University Performing Arts and University Galleries administrate programs in creative and performing arts including the Jazz Room Series, New Jersey Playwrights Contest, and all public productions in the Shea Center for Performing Arts[54] and the Hunziker Black Box Theatre.[55] Cultural events take place on campus throughout the year, including theater productions, gallery exhibits, and concerts presenting jazz, classical, and contemporary music.