Paulet was the eldest son of Sir John Paulet (1460 – 5 January 1525) of Basing Castle at Old Basing, near Basingstoke, in Hampshire and Nunney Castle in Somerset. His mother was his father's cousin, Alice, the daughter of Sir William and Elizabeth (formerly Denebaud) Paulet. She survived her husband. William had six siblings, including Sir George Paulet of Crondall Manor in Hampshire and Eleanor Paulet (born 1479), wife of William Giffard of Itchell Manor at Ewshot, also in Hampshire.

There is some disagreement over his date of birth, with different authorities quoting 1483 or 1485.[1] A claim that he was ninety-seven at his death would place his birth in 1474 or 1475. There is also uncertainty about where he was born, but it may have been at Fisherton Delamere in Wiltshire, one of his father's manors.[2][3][4]

His father, who had held a command against the Cornish rebels in 1497, was the head of a younger branch of an ancient Somerset family seated in the fourteenth century at Pawlett or Paulet and Road, close to Bridgwater, being the son of John Paulet and Elizabeth Roos. William's great-grandfather John Paulet acquired the Hampshire estates by his marriage with Constance Poynings, granddaughter and coheiress of Thomas Poynings, 5th Baron St John of Basing; his barony became abeyant upon his death in 1428/1429.

Career as a national statesman

During his long career Paulet held numerous offices which included:[6][8]

Paulet's political career began in 1529, when he was elected knight of the shire for Hampshire.[8] In 1532, he accompanied King Henry VIII to Calais, France, and the following spring, he accompanied the Duke of Norfolk to join King Francis I of France in a proposed audience with the Pope, to discuss Henry's divorce from Catherine of Aragon. In 1536, he was granted the keepership of Pamber Forest, and on 9 March 1539 was created Baron St John.[8] He became steward of the bishopric of Winchester, and became a close associate of Cardinal Thomas Wolsey and a friend of Thomas Cromwell. He was also Comptroller of the Royal Household, and held many other high positions.[8] 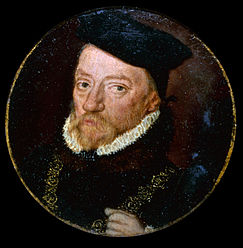 In 1535 and 1536, he served as one of the judges for the trials of John Fisher, Sir Thomas More, and the alleged accomplices of Anne Boleyn; in 1535, he became Lord Chamberlain. He partially led the royal forces against the Pilgrimage of Grace, a rebellion that broke out in the autumn of 1536, and in 1538, he became Treasurer of the Household. In 1540, he became the master of Henry's Court of Wards and Liveries, a Knight of the Garter in 1543, and Governor of Portsmouth and Lord Steward of the Household in 1545. In 1546, he became Lord President of the Council, and in 1547, he was an executor of the will of King Henry VIII.[5]

He continued his political manoeuvres in 1549 by supporting the Earl of Warwick against the Duke of Somerset—in reward, on 19 January 1550 he was given the Earldom of Wiltshire and Somerset's position of Lord Treasurer.[8] When Warwick was created Duke of Northumberland on 11 October 1551, Paulet received the Marquessate of Winchester.[8] Six weeks later, he served as Lord High Steward in the Duke of Somerset's trial.

It was said that Northumberland and Winchester "ruled the court" of the minor King Edward VI. Mary I affirmed him in all of his positions. After her death, he remained Lord Treasurer and retained many of his other positions, and even at an advanced age (in 1559, he was over seventy years old), he showed no signs of declining—he was Speaker of the House of Lords in 1559 and 1566. He remained in good standing with the English monarchs—Queen Elizabeth once joked, "for, by my troth, if my lord treasurer were but a young man, I could find it in my heart to have him for a husband before any man in England." Late in life, he opposed any military support of Continental Protestantism, as he feared it would cause a breach with strongly Catholic Spain.

Paulet enjoyed a remarkably long career during the English Reformation. Starting out as a Catholic, he was quickly persuaded to see things Henry's way once the breach with Rome had been decided on. He was rewarded with former Church properties following the dissolution of the monasteries. Under Edward VI he became an evangelical Protestant and persecuted Roman Catholics and Henrician Conservatives alike. On the accession of the Catholic Mary he announced his reconversion and commenced persecuting his former Protestant co-religionists, even denouncing Bishop Bonner for "laxity in prosecuting the heretics." On Elizabeth's succession, he once again shifted his sails and became an advocate of middle road Anglicanism. All in all, he professed five changes in religious course. Once, when asked how he managed to survive so many storms, not only unhurt, but rising all the while, Paulet answered: "By being a willow, not an oak."

Paulet was still in office when he died, a very old man, at Basing House on 10 March 1572, a house that he held to rebuild and fortify. His tomb is on the south side of the chancel of Basing church.[5]