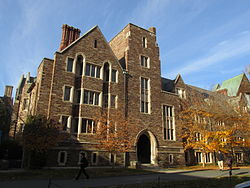 Woodrow Wilson College, the first of Princeton University's six residential colleges, was developed in the late 1950s when a group of students formed the Woodrow Wilson Lodge as an alternative to the eating clubs. The Woodrow Wilson Lodge members originally met and dined in Madison Hall, which is now part of John D. Rockefeller III College. Following the ideals of Woodrow Wilson, president of Princeton from 1902-1910, the members advocated a more thorough integration of academic, social and residential life on campus. In current times the college is known more simply as Wilson College.

In the fall of 1961, President Robert Goheen dedicated Wilcox Hall, the bequest of a distinguished alumnus, T. Ferdinand Wilcox '00, and the Lodge moved to the new dining facility and became the Woodrow Wilson Society. Wilcox Hall provided a permanent facility for the Woodrow Wilson Society with a dining room, library, billiards area, lounges for reading and recreation, and rooms for various social activities.

The college is home to roughly 500 freshmen and sophomores and a small number of upperclass Residential College Advisors (RCAs). The college staff is led by the master (a faculty member), and also includes a dean, a director of studies, a director of student life, a college administrator, a college assistant, and a college secretary. A council of current students also contributes to college life, organizing trips, study breaks, and other opportunities.

Beginning with the 2007-2008 school year, Wilson College has, along with Princeton's other residential colleges, catered to upperclassmen as well as underclassmen, with new programs and advising. However, the college no longer houses upperclassmen, with the exception of RCAs. Wilson is a two-year college, paired with nearby Butler College. Wilsonians who wish to live in a residential college past their sophomore year may move into one of the three four-year colleges, Whitman, Mathey, and Butler. Since Wilson is paired with Butler College, priority for housing in Butler is given to students who spent their first two years living in Wilson or Butler. Therefore, although it is possible for a Wilsonian to move into any of the three four-year colleges after sophomore year, it is most advantageous for him or her to move into Butler.