The pronunciation of the digraph ⟨wh⟩ in English has changed over time, and still varies today between different regions and accents. It is now most commonly pronounced /w/, the same as a plain initial ⟨w⟩, although some dialects, particularly those of Scotland and Ireland, retain the traditional pronunciation /hw/, generally realized as [ʍ], a voiceless "w" sound. The process by which the historical /hw/ has become /w/ in most modern varieties of English is called the wine–whine merger. It is also referred to as glide cluster reduction.

Before rounded vowels, a different reduction process took place in Middle English, as a result of which the ⟨wh⟩ in words like who and whom is now pronounced /h/. (A similar sound change occurred earlier in the word how.)

What is now English ⟨wh⟩ is thought to have originated as the Proto-Indo-European consonant *kʷ (whose reflexes came to be written ⟨qu⟩ in Latin and the Romance languages). In the Germanic languages, in accordance with Grimm's Law, Indo-European voiceless stops became voiceless fricatives in most environments. Thus the labialized velar stop *kʷ initially became presumably a labialized velar fricative *xʷ in pre-Proto-Germanic, then probably becoming *[ʍ] – a voiceless labio-velar approximant – in Proto-Germanic proper. The sound was used in Gothic and represented by the symbol known as hwair; in Old English it was spelled as ⟨hw⟩. The spelling was changed to ⟨wh⟩ in Middle English, but the pronunciation remained [ʍ].

Because Proto-Indo-European interrogative words typically began with *kʷ, English interrogative words (such as who, which, what, when, where) typically begin with ⟨wh⟩ (for the word how, see below). As a result, such words are often called wh-words, questions formed from them are called wh-questions, and a common grammatical phenomenon affecting them is called wh-movement, even in reference to languages in which such words do not begin with ⟨wh⟩.

Before rounded vowels, such as /uː/ or /oː/, there was a tendency, beginning in the Old English period, for the sound /h/ to become labialized, causing it to sound like /hw/. Therefore, words with an established /hw/ in that position came to be perceived (and spelt) as beginning with plain /h/. This occurred with the interrogative word how (Proto-Germanic *hwō, Old English hū).

A similar process of labialization of /h/ before rounded vowels occurred in the Middle English period, around the 15th century, in some dialects. Some words which historically began with /h/ came to be written ⟨wh⟩ (whole, whore). Later in many dialects /hw/ was delabialized to /h/ in this same environment, regardless of whether the historic pronunciation was /h/ or /hw/. (In some other dialects the labialized /h/ was reduced instead to /w/, leading to such pronunciations as the traditional Kentish /woʊm/ for home.) This process affected the pronoun who and its inflected forms. These had escaped the earlier reduction to /h/ because they had unrounded vowels in Old English, but by Middle English the vowel had become rounded, and so the /hw/ of these words was now subject to delabialization:

By contrast with how, these words changed after their spelling with ⟨wh⟩ had become established, and thus continue to be written with ⟨wh⟩ like the other interrogative words which, what, etc. (which were not affected by the above changes since they had unrounded vowels – the vowel of what became rounded at a later time). 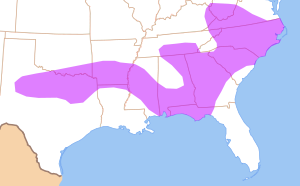 The wine–whine merger is the phonological merger by which /hw/, historically realized as a voiceless labio-velar approximant [ʍ], comes to be pronounced the same as plain /w/, that is, as a voiced labio-velar approximant [w]. John C. Wells refers to this process as Glide Cluster Reduction.[3] It causes the distinction to be lost between the pronunciation of ⟨wh⟩ and that of ⟨w⟩, so pairs of words like wine/whine, wet/whet, weather/whether, wail/whale, Wales/whales, wear/where, witch/which become homophones. This merger has taken place in the dialects of the great majority of English speakers.

The merger is essentially complete in England, Wales, the West Indies, South Africa, Australia, and in the speech of young speakers in New Zealand. The merger is not found, however, in Scotland in most of Ireland and in the speech of older speakers in New Zealand – here speakers continue to make the distinction between wh- and w- (although the distinction is usually lost in Belfast and some other urban areas of Northern Ireland[4]).

Most speakers in the United States and Canada have the merger. According to Labov, Ash, and Boberg (2006: 49),[2] while there are regions of the U.S. (particularly in the Southeast) where speakers keeping the distinction are about as numerous as those having the merger, there are no regions where the preservation of the distinction is predominant (see map). Throughout the U.S. and Canada, about 83% of respondents in the survey had the merger completely, while about 17% preserved at least some trace of the distinction.

The merger seems to have been present in the south of England as early as the 13th century.[5] It was unacceptable in educated speech, however, until the late 18th century. Nowadays there is not generally any stigma attached to either pronunciation. Some RP speakers may use /hw/ for ⟨wh⟩, a usage widely considered "correct, careful and beautiful", but this is usually a conscious choice rather than a natural part of the speaker's accent.[3]

A portrayal of the regional retention of the distinct wh- sound is found in the speech of the character Frank Underwood, a South Carolina politician, in the American television series House of Cards. The show King of the Hill pokes fun at the issue through character Hank Hill's use of the hypercorrected [hʍ] pronunciation. A similar gag can be found in several episodes of Family Guy, with Brian becoming annoyed by Stewie's over-emphasis of the /hw/ sound in his pronunciation of "Cool hWhip" and "hWil hWheaton".

The distribution of the wh- sound in words does not always exactly match the standard spelling; for example, Scots pronounce whelk with plain /w/, while in many regions weasel has the wh- sound.[3]

Below is a list of word pairs which are liable to be pronounced as homophones by speakers having the wine–whine merger (click "show" to view).

Pronunciations and phonological analysis of the distinct wh sound

As mentioned above, the sound of initial ⟨wh⟩, when distinguished from plain ⟨w⟩, is often pronounced as a voiceless labio-velar approximant [ʍ], a voiceless version of the ordinary [w] sound. In some accents, however, the pronunciation is more like [hʍ], and in some Scottish dialects it may be closer to [xʍ] or [kʍ] – the [ʍ] sound preceded by a voiceless velar fricative or stop. (In other places the /kw/ of qu- words is reduced to [ʍ].) In the Black Isle, the /hw/ (like /h/ generally) is traditionally not pronounced at all.[6] Pronunciations of the [xʍ] or [kʍ] type are reflected in the former Scots spelling quh- (as in quhen for when, etc.).[7]

In some dialects of Scots, the sequence /hw/ has merged with the voiceless labiodental fricative /f/.[8] Thus whit ("what") is pronounced /fɪt/, whan ("when") becomes /fan/, and whine becomes /fain/ (a homophone of fine). This is also found in some Irish English with an Irish Gaelic substrate influence (something which has led to an interesting re-borrowing of whisk(e)y as Irish Gaelic fuisce, the word having originally entered English from Scottish Gaelic).

Phonologically, the distinct sound of ⟨wh⟩ is often analyzed as the consonant cluster /hw/, and it is transcribed so in most dictionaries. When it has the pronunciation [ʍ], however, it may also be analyzed as a single phoneme, /ʍ/.