From Infogalactic: the planetary knowledge core
(Redirected from Wireless communications)
Jump to: navigation, search
For other uses, see Wireless (disambiguation). 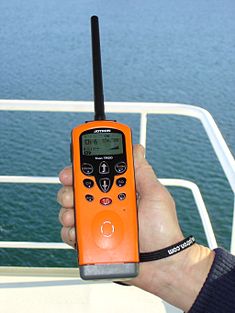 A handheld On-board communication station of the maritime mobile service

Wireless communication is the transfer of information between two or more points that are not connected by an electrical conductor.

The most common wireless technologies use radio. With radio waves distances can be short, such as a few meters for television or as far as thousands or even millions of kilometers for deep-space radio communications. It encompasses various types of fixed, mobile, and portable applications, including two-way radios, cellular telephones, personal digital assistants (PDAs), and wireless networking. Other examples of applications of radio wireless technology include GPS units, garage door openers, wireless computer mice, keyboards and headsets, headphones, radio receivers, satellite television, broadcast television and cordless telephones.

Somewhat less common methods of achieving wireless communications include the use of other electromagnetic wireless technologies, such as light, magnetic, or electric fields or the use of sound.

It should be noted that the term wireless has been used twice in communications history, with slightly different meaning. It was initially used from about 1890 for the first primitive radio transmitting and receiving technology, as in wireless telegraphy, until the new word radio replaced it around 1920. The term was revived in the 1980s and 1990s mainly to distinguish digital devices that communicate without wires, such as the examples listed in the previous paragraph, from those that require wires. This is its main usage today.

LTE, LTE-Advanced, Wi-Fi, Bluetooth are some of the most common modern wireless technologies.

Wireless operations permit services, such as a long-range communications, that are impossible or impractical to implement with the use of wires. The term is commonly used in the telecommunications industry to refer to telecommunications systems (e.g. radio transmitters and receivers, remote controls etc.) which use some form of energy (e.g. radio waves, acoustic energy, etc.) to transfer information without the use of wires.[1] Information is transferred in this manner over both short and long distances. 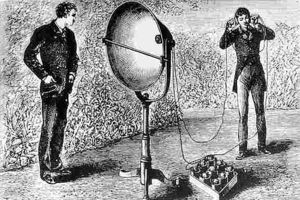 The world's first wireless telephone conversation occurred in 1880, when Alexander Graham Bell and Charles Sumner Tainter invented and patented the photophone, a telephone that conducted audio conversations wirelessly over modulated light beams (which are narrow projections of electromagnetic waves). In that distant era, when utilities did not yet exist to provide electricity and lasers had not even been imagined in science fiction, there were no practical applications for their invention, which was highly limited by the availability of both sunlight and good weather. Similar to free-space optical communication, the photophone also required a clear line of sight between its transmitter and its receiver. It would be several decades before the photophone's principles found their first practical applications in military communications and later in fiber-optic communications.[2][3] 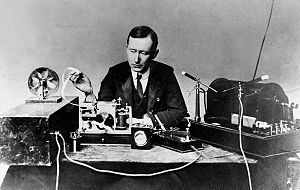 Marconi transmitting the first radio signal across the Atlantic.

The term "wireless" came into public use to refer to a radio receiver or transceiver (a dual purpose receiver and transmitter device), establishing its use in the field of wireless telegraphy early on; now the term is used to describe modern wireless connections such as in cellular networks and wireless broadband Internet. It is also used in a general sense to refer to any type of operation that is implemented without the use of wires, such as "wireless remote control" or "wireless energy transfer", regardless of the specific technology (e.g. radio, infrared, ultrasonic) used. Guglielmo Marconi and Karl Ferdinand Braun were awarded the 1909 Nobel Prize for Physics for their contribution to wireless telegraphy.

Wireless communications can be via: 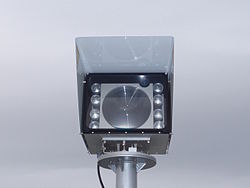 An 8-beam free space optics laser link, rated for 1 Gbit/s at a distance of approximately 2 km. The receptor is the large disc in the middle, the transmitters the smaller ones. To the top and right corner a monocular for assisting the alignment of the two heads.

The technology is useful where physical connections are impractical due to high costs or other considerations. For example, free space optical links are used in cities between office buildings which are not wired for networking, where the cost of running cable through the building and under the street would be prohibitive.

Another widely used example is consumer IR devices such as remote controls and IrDA (Infrared Data Association) networking, which is used as an alternative to WiFi networking to allow laptops, PDAs, printers, and digital cameras to exchange data.

Electromagnetic induction short range communication and power. This has been used in biomedical situations such as pacemakers, as well as for short-range RFid tags.

Common examples of wireless equipment include:[8][9]

The term "wireless" should not be confused with the term "cordless", which is generally used to refer to powered electrical or electronic devices that are able to operate from a portable power source (e.g., a battery pack) without any cable or cord to limit the mobility of the cordless device through a connection to the mains power supply.

Light, colors, AM and FM radio, and electronic devices make use of the electromagnetic spectrum. The frequencies of the radio spectrum that are available for use for communication are treated as a public resource and are regulated by national organizations such as the Federal Communications Commission in the USA, or Ofcom in the United Kingdom. This determines which frequency ranges can be used for what purpose and by whom. In the absence of such control or alternative arrangements such as a privatized electromagnetic spectrum, chaos might result if, for example, airlines didn't have specific frequencies to work under and an amateur radio operator were interfering with the pilot's ability to land an aircraft. Wireless communication spans the spectrum from 9 kHz to 300 GHz.[citation needed]

One of the best-known examples of wireless technology is the mobile phone, also known as a cellular phone, with more than 4.6 billion mobile cellular subscriptions worldwide as of the end of 2010.[11] These wireless phones use radio waves from signal-transmission towers to enable their users to make phone calls from many locations worldwide. They can be used within range of the mobile telephone site used to house the equipment required to transmit and receive the radio signals from these instruments.[12]

Wireless data communications are an essential component of mobile computing.[13] The various available technologies differ in local availability, coverage range and performance,[14][15] and in some circumstances, users must be able to employ multiple connection types and switch between them. To simplify the experience for the user, connection manager software can be used,[16][17] or a mobile VPN deployed to handle the multiple connections as a secure, single virtual network.[18] Supporting technologies include:

Wi-Fi is a wireless local area network that enables portable computing devices to connect easily to the Internet.[19] Standardized as IEEE 802.11 a,b,g,n, Wi-Fi approaches speeds of some types of wired Ethernet. Wi-Fi has become the de facto standard for access in private homes, within offices, and at public hotspots.[20] Some businesses charge customers a monthly fee for service, while others have begun offering it for free in an effort to increase the sales of their goods.[21]

Cellular data service offers coverage within a range of 10-15 miles from the nearest cell site.[14] Speeds have increased as technologies have evolved, from earlier technologies such as GSM, CDMA and GPRS, to 3G networks such as W-CDMA, EDGE or CDMA2000.[22][23]

Mobile Satellite Communications may be used where other wireless connections are unavailable, such as in largely rural areas[24] or remote locations.[14] Satellite communications are especially important for transportation, aviation, maritime and military use.[25]

Wireless energy transfer is a process whereby electrical energy is transmitted from a power source to an electrical load that does not have a built-in power source, without the use of interconnecting wires. There are two different fundamental methods for wireless energy transfer. They can be transferred using either far-field methods that involve beam power/lasers, radio or microwave transmissions or near-field using induction. Both methods utilize electromagnetism and magnetic fields.[27]

New wireless technologies, such as mobile body area networks (MBAN), have the capability to monitor blood pressure, heart rate, oxygen level and body temperature. The MBAN works by sending low powered wireless signals to receivers that feed into nursing stations or monitoring sites. This technology helps with the intentional and unintentional risk of infection or disconnection that arise from wired connections.[28]

Answering the call of customers frustrated with cord clutter, many[who?] manufacturers of computer peripherals turned to wireless technology to satisfy their consumer base[citation needed]. Originally these units used bulky, highly limited transceivers to mediate between a computer and a keyboard and mouse; however, more recent generations have used small, high-quality devices, some even incorporating Bluetooth. These systems have become so ubiquitous that some users have begun complaining about a lack of wired peripherals.[who?] Wireless devices tend to have a slightly slower response time than their wired counterparts; however, the gap is decreasing.[citation needed]

Computer interface devices such as a keyboard or mouse are powered by a battery and send signals to a receiver through a USB port by way of a radio frequency (RF) receiver. The RF design makes it possible for signals to be transmitted wirelessly and expands the range of effective use, usually up to 10 feet. Distance, physical obstacles, competing signals, and even human bodies can all degrade the signal quality.[29]

Concerns about the security of wireless keyboards arose at the end of 2007, when it was revealed that Microsoft's implementation of encryption in some of its 27 MHz models was highly insecure.[30]