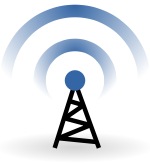 A wireless network is any type of computer network that uses wireless data connections for connecting network nodes. 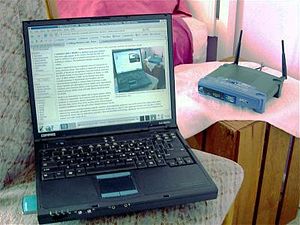 Wireless personal area networks (WPANs) interconnect devices within a relatively small area, that is generally within a person's reach.[3] For example, both Bluetooth radio and invisible infrared light provides a WPAN for interconnecting a headset to a laptop. ZigBee also supports WPAN applications.[4] Wi-Fi PANs are becoming commonplace (2010) as equipment designers start to integrate Wi-Fi into a variety of consumer electronic devices. Intel "My WiFi" and Windows 7 "virtual Wi-Fi" capabilities have made Wi-Fi PANs simpler and easier to set up and configure.[5] 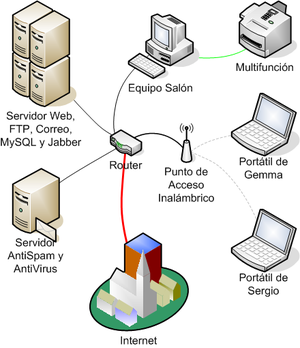 A wireless local area network (WLAN) links two or more devices over a short distance using a wireless distribution method, usually providing a connection through an access point for internet access. The use of spread-spectrum or OFDM technologies may allow users to move around within a local coverage area, and still remain connected to the network.

Products using the IEEE 802.11 WLAN standards are marketed under the Wi-Fi brand name. Fixed wireless technology implements point-to-point links between computers or networks at two distant locations, often using dedicated microwave or modulated laser light beams over line of sight paths. It is often used in cities to connect networks in two or more buildings without installing a wired link.

A wireless mesh network is a wireless network made up of radio nodes organized in a mesh topology. Each node forwards messages on behalf of the other nodes. Mesh networks can "self heal", automatically re-routing around a node that has lost power.

Wireless wide area networks are wireless networks that typically cover large areas, such as between neighbouring towns and cities, or city and suburb. These networks can be used to connect branch offices of business or as a public internet access system. The wireless connections between access points are usually point to point microwave links using parabolic dishes on the 2.4 GHz band, rather than omnidirectional antennas used with smaller networks. A typical system contains base station gateways, access points and wireless bridging relays. Other configurations are mesh systems where each access point acts as a relay also. When combined with renewable energy systems such as photo-voltaic solar panels or wind systems they can be stand alone systems.

Space networks are networks used for communication between spacecraft, usually in the vicinity of the Earth. The example of this is NASA's Space Network.

In a general sense, wireless networks offer a vast variety of uses by both business and home users.[8]

"Now, the industry accepts a handful of different wireless technologies. Each wireless technology is defined by a standard that describes unique functions at both the Physical and the Data Link layers of the OSI model. These standards differ in their specified signaling methods, geographic ranges, and frequency usages, among other things. Such differences can make certain technologies better suited to home networks and others better suited to network larger organizations."[8]

Each standard varies in geographical range, thus making one standard more ideal than the next depending on what it is one is trying to accomplish with a wireless network.[8] The performance of wireless networks satisfies a variety of applications such as voice and video. The use of this technology also gives room for expansions, such as from 2G to 3G and, most recently, 4G technology, which stands for fourth generation of cell phone mobile communications standards. As wireless networking has become commonplace, sophistication increases through configuration of network hardware and software, and greater capacity to send and receive larger amounts of data, faster, is achieved.[9]

Space is another characteristic of wireless networking. Wireless networks offer many advantages when it comes to difficult-to-wire areas trying to communicate such as across a street or river, a warehouse on the other side of the premise or buildings that are physically separated but operate as one.[9] Wireless networks allow for users to designate a certain space which the network will be able to communicate with other devices through that network. Space is also created in homes as a result of eliminating clutters of wiring.[10] This technology allows for an alternative to installing physical network mediums such as TPs, coaxes, or fiber-optics, which can also be expensive.

For homeowners, wireless technology is an effective option compared to ethernet for sharing printers, scanners, and high speed internet connections. WLANs help save the cost of installation of cable mediums, save time from physical installation, and also creates mobility for devices connected to the network.[10] Wireless networks are simple and require as few as one single wireless access point connected directly to the Internet via a router.[8]

The telecommunications network at the physical layer also consists of many interconnected wireline Network Elements (NEs). These NEs can be stand-alone systems or products that are either supplied by a single manufacturer, or are assembled by the service provider (user) or system integrator with parts from several different manufacturers.

Wireless NEs are products and devices used by a wireless carrier to provide support for the backhaul network as well as a Mobile Switching Center (MSC).

Reliable wireless service depends on the network elements at the physical layer to be protected against all operational environments and applications (see GR-3171, Generic Requirements for Network Elements Used in Wireless Networks - Physical Layer Criteria).[11]

What are especially important are the NEs that are located on the cell tower to the Base Station (BS) cabinet. The attachment hardware and the positioning of the antenna and associated closures/cables are required to have adequate strength, robustness, corrosion resistance, and rain/solar resistance for expected wind, storm, ice, and other weather conditions. Requirements for individual components, such as hardware, cables, connectors, and closures, shall take into consideration the structure to which they are attached.

Interferences
Compared to wired systems, wireless networks are frequently subject to electromagnetic interference. This can be caused by other networks or other types of equipment that generate radio waves that are within, or close, to the radio bands used for communication. Interference can degrade the signal or cause the system to fail.

Absorption and reflection
Some materials cause absorption of electromagnetic waves, preventing it from reaching the receiver, in other cases, particularly with metallic or conductive materials reflection occurs. This can cause dead zones where no reception is available. Aluminium foiled thermal isolation in modern homes can easily reduce indoor mobile signals by 10 dB frequently leading to complaints about bad reception of long distance rural cell signals.

Multipath fading
In multipath fading two or more different routes taken by the signal, due to reflections, can cause the signal to cancel out at certain locations, and to be stronger in other places (upfade).

Hidden node problem
The hidden node problem occurs in some types of network when a node is visible from a wireless access point (AP), but not from other nodes communicating with that AP. This leads to difficulties in media access control.

Shared resource problem
The wireless spectrum is a limited resource and shared by all nodes in the range of its transmitters. Bandwidth allocation becomes complex with multiple participating users. Often users are not aware that advertised numbers (e.g., for IEEE 802.11 equipment or LTE networks) are not their capacity, but shared with all other users and thus the individual user rate is far lower. With increasing demand, the capacity crunch is more and more likely to happen. User-in-the-loop (UIL) may be an alternative solution to ever upgrading to newer technologies for over-provisioning. 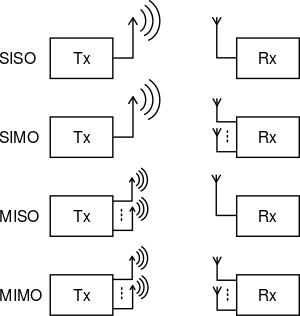 Understanding of SISO, SIMO, MISO and MIMO. Using multiple antennas and transmitting in different frequency channels can reduce fading, and can greatly increase the system capacity.

Shannon's theorem can describe the maximum data rate of any single wireless link, which relates to the bandwidth in hertz and to the noise on the channel.

One can greatly increase channel capacity by using MIMO techniques, where multiple aerials and/or multiple frequencies can exploit multiple paths to the receiver to achieve much higher throughput - by a factor of the product of the frequency and aerial diversity at each end.

Under Linux the Central Regulatory Domain Agent (CRDA) controls the setting of channels.[12]

The total network bandwidth depends on how dispersive the medium is (more dispersive medium generally has better total bandwidth because it minimises interference), how many frequencies are available, how noisy those frequencies are, how many aerials are used and whether directional antenna are in use, whether nodes employ power control and so on.

Cellular wireless networks generally have good capacity, due to their use of directional aerials, and their ability to reuse radio channels in non-adjacent cells. Additionally, cells can be made very small using low power transmitters, and this fact is used in cities to give network capacity that scales linearly with population density.

Wireless access points are also often close to humans, but the drop off in power over distance is fast, following the inverse-square law.[13] The position of the United Kingdom's Health Protection Agency (HPA) is that “...radio frequency (RF) exposures from WiFi are likely to be lower than those from mobile phones.” It also saw “...no reason why schools and others should not use WiFi equipment.”[14] In October 2007, the HPA launched a new “systematic” study into the effects of WiFi networks on behalf of the UK government, in order to calm fears that had appeared in the media in a recent period up to that time".[15] Dr Michael Clark, of the HPA, says published research on mobile phones and masts does not add up to an indictment of WiFi.[16]