The Wisconsin State Assembly is the lower house of the Wisconsin Legislature. Together with the smaller Wisconsin Senate, the two constitute the legislative branch of the U.S. state of Wisconsin.

Representatives are elected for two-year terms, elected during the fall elections. If a vacancy occurs in an Assembly seat between elections, it may be filled only by a special election.

The Assembly chamber is located in the west wing of the Wisconsin State Capitol building, in Madison, Wisconsin. 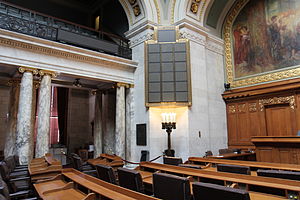 Chairs and Voting Board

Representatives elected or re-elected in the fall of 2012 receive an annual salary of $49,943.[citation needed]

In addition to their salaries, Representatives outside Dane County may receive up to $88 a day each in living expenses while they are in Madison on state business. Members of the Dane County delegation are allowed up to $44 each in expenses.

Each Representative also receives $75 per month in "out-of-session" pay when the Legislature is in session for three days or less.

According to a 1960 study, at that time Assembly salaries and benefits were so low that in Milwaukee County, positions on the County Board of Supervisors and the Milwaukee Common Council were considered more desirable than seats in the Assembly, and an average of 23% of Milwaukee legislators did not seek re-election. This pattern was not seen to hold to the same extent in the rest of the state, where local offices tended to pay less well.[2]