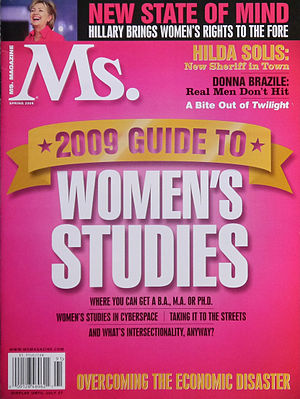 Women's studies is an interdisciplinary field of academic study that examines gender as a social and cultural construct, the social status and contributions of women, and the relationships between power and gender.[1]

Popular methodologies within the field of women's studies include standpoint theory, intersectionality, multiculturalism, transnational feminism, autoethnography, and reading practices associated with critical theory, post-structuralism, and queer theory. The field researches and critiques societal norms of gender, race, class, sexuality, and other social inequalities. It is closely related to the broader field of gender studies. Women's studies preceded gender studies as an established field, in the United States the first PhD in women's studies was created in 1990 and the first PhD in gender studies was created in 2005.

The first accredited women's studies course was held in 1969 at Cornell University.[2] After a year of intense organizing of women's consciousness raising groups, rallies, petition circulating, and operating unofficial or experimental classes and presentations before seven committees and assemblies,[3][4] the first women's studies program in the United States was established in 1970 at San Diego State College (now San Diego State University). In conjunction with National Women's Liberation Movement, students and community members created the AD HOC Committee for women's studies.[5] By 1974 SDSU faculty members began a nationwide campaign for the integration of the department. At the time, these actions and the field was extremely political. Due to the sensitive political nature of the movement and harsh backlash to the feminist movement, there are still a lot of unknowns about the creation of women's studies.[6]

The first scholarly journal in interdisciplinary women's studies, Feminist Studies, began publishing in 1972.[7] The National Women's Studies Association (of the United States) was established in 1977.[8]

Women's studies faculty practice a diverse array of pedagogies. However, there are common themes to the ways that many women's studies courses are taught; teaching and learning practices may draw on feminist pedagogy. Women's studies curricula often encourage students to participate in service-learning activities in addition to discussion and reflection upon course materials. The development of critical reading, writing, and oral expression are often key to these courses, which can be listed across curricula in the humanities, social sciences, and sciences.[vague] The decentralization of the professor as the source of knowledge is often fundamental to women's studies classroom culture.[14] Courses are often more egalitarian than those in traditional disciplines, stressing the critical analysis of texts and the development of critical writing. Not dissimilar to gender studies, women's studies employs feminist, queer, and critical theories.[citation needed] Since the 1970s, scholars of women's studies have taken post-modern approaches to understanding gender as it intersects with race, class, ethnicity, sexuality, religion, age, and (dis)ability to produce and maintain power structures within society. With this turn, there has been a focus on language, subjectivity, and social hegemony, and how the lives of subjects, however they identify, are constituted. At the core of these theories is the notion that however one identifies, gender, sex, and sexuality are not intrinsic, but are socially constructed.[citation needed]

Women studies programs are involved in social justice and design curricula that are embedded with theory and also activism outside of the classroom. Some Women Studies programs offer internships that are community-based allowing students the opportunity to gain a better understanding of how oppression directly affects women's lives. This experience, informed by theory from feminist studies, queer theory, black feminist theory, African studies, and many other theoretical frameworks, allows students the opportunity to critically analyze experience as well as create creative solutions for issues on a local level.[citation needed] However, Daphne Patai, from the University of Massachusetts Amherst, has criticized this aspect of women's studies programs, arguing that they place politics over education, arguing that "the strategies of faculty members in these programs have included policing insensitive language, championing research methods deemed congenial to women (such as qualitative over quantitative methods), and conducting classes as if they were therapy sessions."[15]

In most institutions, Women's Studies bases its teachings off of a Triad Model. This means it has equal components of research, theory and praxis. Faculty incorporate these components into classes across a variety of topics including: Popular Culture, Women in the Economy, Reproductive and Environmental Justice, classes centered on Women of Color, Globalization, Feminist Principles, and Queer Studies.[16] Women's Studies programs and courses are designed to explore the intersectionality of gender, race, sexuality, class and other topics that are involved in identity politics and societal norms through a feminist lens. Many of these programs involve classes around media literacy, sexuality, race, history involving women, queer theory, multiculturalism and many other closely related courses.

Throughout these classes students and faculty take an intersectional framework approach to analyze and critique various institutional structures such as: education, media, industry, language, family, medicine, research, and prisons. This means they think about the effects on people of differing genders, races, sexualities, cultures, religions, social classes, and economic statuses within the institution as well as how those identities intersect.

Some of the most prominent undergraduate women's studies programs include the University Of California system, Emory University, and the University of Michigan, Wisconsin, New Jersey, Connecticut, Pennsylvania, and New York.[18]

According to Karlyn Crowley, a contributing author for Rethinking Women's and Gender Studies, rarely are issues related to spirituality and religion seriously addressed, which she argues can lead to multiple consequences that impact the field.[19] In her chapter titled Secularity, she observes that the resulting dynamic is one of "bifurcation" where secularity is privileged as being more progressive. Crowley claims, "By not interrogating these categories of the good and the bad religions, the secular and the religious, and the racial, cultural, and colonialist impulses at work, WGS often succumbs to two main secular narratives: (1) spirituality/religion is seemingly absent or neglected while signifying certain normative assumptions; (2) spirituality/religion is placed into easy binarisms and dismissed" (2012, 248).[19] The dismissals and unexamined presuppositions that Crowley describes also reveals what she notes as leading to barriers. She suggests these barriers prevent one from at least engaging with ideas that could potentially inspire different ways of approaching issues connected to social change and to social justice.

Considering these critiques, Crowley discusses the work of AnaLouise Keating for the purpose of examining how the exploration of spirituality and religion in dialogues, debates, and other forms of exchanges within Women's Studies, can encourage more constructive, productive, and meaningful engagement. Cited by Crowley, Keating states:

Unlike "New Age" versions of spirituality, which focus almost exclusively on the personal (so that the goals become increased wealth, a "good life," or other solipsistic materialistic terms), spiritual activism begins with the personal yet moves outward, acknowledging our radical interconnectedness. This is spirituality for social change, spirituality that recognizes the many difference among us yet insists on our commonalities and uses these commonalities as catalysts for transformation. What a contrast: while identity politics requires holding onto specific categories of identity, spiritual activism demands that we let them go( qtd. in Crowley 252)[19]

Keating reveals that current discourses in Women's Studies appear to remain within the boundaries of one's identity, such as that of one's racial, political, social, religious, and/or economic backgrounds. She considers the approaches espoused by different spiritual and religious ideologies that promote the interconnectedness of humanity as concepts that can provide solutions that enable the flourishing of the ecosystem and of humanity. However, as Keating and Crowley suggest without seriously considering issues related to spirituality and religion within Women's Studies, one is limited to unexamined presuppositions that lead to the dismissal of the unknown and of making limited progress in social change and in social justice.