From Infogalactic: the planetary knowledge core
Jump to: navigation, search
This article is about the type of computer. For workstations in music production, see music workstation. For furniture, see cubicle and computer desk. 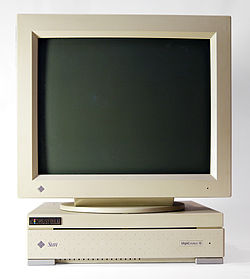 Sun SPARCstation 10 with CRT monitor, from the early 1990s

A workstation is a special computer designed for technical or scientific applications. Intended primarily to be used by one person at a time, they are commonly connected to a local area network and run multi-user operating systems. The term workstation has also been used loosely to refer to everything from a mainframe computer terminal to a PC connected to a network, but the most common form refers to the group of hardware offered by several current and defunct companies such as Sun Microsystems, Silicon Graphics, Apollo Computer, DEC, HP and IBM which opened the door for the 3D graphics animation revolution of the late 1990s.

Workstations offered higher performance than mainstream personal computers, especially with respect to CPU and graphics, memory capacity, and multitasking capability. Workstations were optimized for the visualization and manipulation of different types of complex data such as 3D mechanical design, engineering simulation (e.g. computational fluid dynamics), animation and rendering of images, and mathematical plots. Typically, the form factor is that of a desktop computer, consist of a high resolution display, a keyboard and a mouse at a minimum, but also offer multiple displays, graphics tablets, 3D mice (devices for manipulating 3D objects and navigating scenes), etc. Workstations were the first segment of the computer market to present advanced accessories and collaboration tools.

The increasing capabilities of mainstream PCs in the late 1990s have blurred the lines somewhat with technical/scientific workstations. The workstation market previously employed proprietary hardware which made them distinct from PCs; for instance IBM used RISC-based CPUs for its workstations and Intel x86 CPUs for its business/consumer PCs during the 1990s and 2000s. However, by the early 2000s this difference disappeared, as workstations now use highly commoditized hardware dominated by large PC vendors, such as Dell and HP & Fujitsu, selling Microsoft Windows or GNU/Linux systems running on x86-64 architecture such as Intel Xeon or AMD Opteron CPUs. 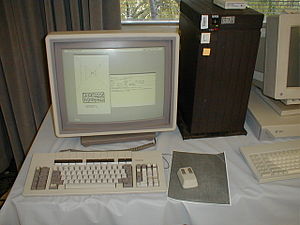 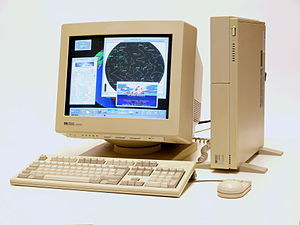 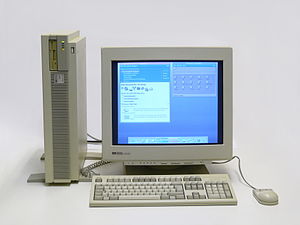 Perhaps the first computer that might qualify as a "workstation" was the IBM 1620, a small scientific computer designed to be used interactively by a single person sitting at the console. It was introduced in 1960. One peculiar feature of the machine was that it lacked any actual arithmetic circuitry. To perform addition, it required a memory-resident table of decimal addition rules. This saved on the cost of logic circuitry, enabling IBM to make it inexpensive. The machine was code-named CADET and rented initially for $1000 a month.

In 1965, IBM introduced the IBM 1130 scientific computer, which was meant as the successor to the 1620. Both of these systems came with the ability to run programs written in Fortran and other languages. Both the 1620 and the 1130 were built into roughly desk-sized cabinets. Both were available with add-on disk drives, printers, and both paper-tape and punched-card I/O. A console typewriter for direct interaction was standard on each.

Early examples of workstations were generally dedicated minicomputers; a system designed to support a number of users would instead be reserved exclusively for one person. A notable example was the PDP-8 from Digital Equipment Corporation, regarded to be the first commercial minicomputer.

The Lisp machines developed at MIT in the early 1970s pioneered some of the principles of the workstation computer, as they were high-performance, networked, single-user systems intended for heavily interactive use. Lisp Machines were commercialized beginning 1980 by companies like Symbolics, Lisp Machines, Texas Instruments (the TI Explorer) and Xerox (the Interlisp-D workstations). The first computer designed for single-users, with high-resolution graphics facilities (and so a workstation in the modern sense of the term) was the Xerox Alto developed at Xerox PARC in 1973. Other early workstations include the Terak 8510/a (1977), Three Rivers PERQ (1979) and the later Xerox Star (1981).

In the early 1980s, with the advent of 32-bit microprocessors such as the Motorola 68000, a number of new participants in this field appeared, including Apollo Computer and Sun Microsystems, who created Unix-based workstations based on this processor. Meanwhile, DARPA's VLSI Project created several spinoff graphics products as well, notably the SGI 3130, and Silicon Graphics' range of machines that followed. It was not uncommon to differentiate the target market for the products, with Sun and Apollo considered to be network workstations, while the SGI machines were graphics workstations. As RISC microprocessors became available in the mid-1980s, these were adopted by many workstation vendors.

Workstations tended to be very expensive, typically several times the cost of a standard PC and sometimes costing as much as a new car. However, minicomputers sometimes cost as much as a house. The high expense usually came from using costlier components that ran faster than those found at the local computer store, as well as the inclusion of features not found in PCs of the time, such as high-speed networking and sophisticated graphics. Workstation manufacturers also tend to take a "balanced" approach to system design, making certain to avoid bottlenecks so that data can flow unimpeded between the many different subsystems within a computer. Additionally, workstations, given their more specialized nature, tend to have higher profit margins than commodity-driven PCs.

The systems that come out of workstation companies often feature SCSI or Fibre Channel disk storage systems, high-end 3D accelerators, single or multiple 64-bit processors, large amounts of RAM, and well-designed cooling. Additionally, the companies that make the products tend to have very good repair/replacement plans. However, the line between workstation and PC is increasingly becoming blurred as the demand for fast computers, networking and graphics have become common in the consumer world, allowing workstation manufacturers to use "off the shelf" PC components and graphics solutions as opposed to proprietary in-house developed technology. Some "low-cost" workstations are still expensive by PC standards, but offer binary compatibility with higher-end workstations and servers made by the same vendor. This allows software development to take place on low-cost (relative to the server) desktop machines.

There have been several attempts to produce a workstation-like machine specifically for the lowest possible price point as opposed to performance. One approach is to remove local storage and reduce the machine to the processor, keyboard, mouse and screen. In some cases, these diskless nodes would still run a traditional operating system and perform computations locally, with storage on a remote server. These approaches are intended not just to reduce the initial system purchase cost, but lower the total cost of ownership by reducing the amount of administration required per user.

This approach was actually first attempted as a replacement for PCs in office productivity applications, with the 3Station by 3Com as an early example; in the 1990s, X terminals filled a similar role for technical computing. Sun has also introduced "thin clients", most notably its Sun Ray product line. However, traditional workstations and PCs continue to drop in price, which tends to undercut the market for products of this type. 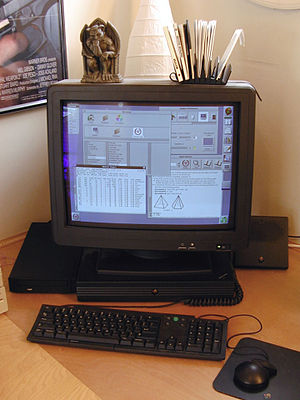 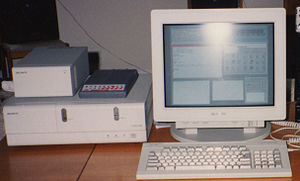 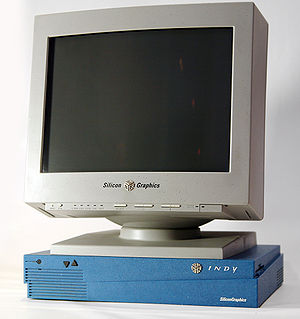 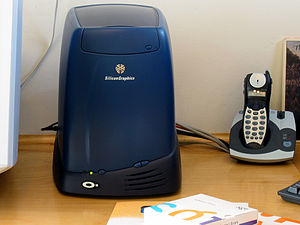 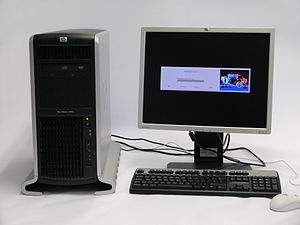 In the early 1980s, a high-end workstation had to meet the three Ms. The so-called "3M computer" had a Megabyte of memory, a Megapixel display (roughly 1000×1000), and a "MegaFLOPS" compute performance (at least one million floating point operations per second).[lower-alpha 1] As limited as this seems today, it was at least an order of magnitude beyond the capacity of the personal computer of the time; the original 1981 IBM Personal Computer had 16 KB memory, a text-only display, and floating-point performance around 1 kiloFLOPS (30 kiloFLOPS with the optional 8087 math coprocessor). Other desirable features not found in desktop computers at that time included networking, graphics acceleration, and high-speed internal and peripheral data buses.

Another goal was to bring the price for such a system down under a "Megapenny", that is, less than $10,000; this was not achieved until the late 1980s, although many workstations, particularly mid-range or high-end still cost anywhere from $15,000 to $100,000 and over throughout the early to mid-1990s.

The more widespread adoption of these technologies into mainstream PCs was a direct factor in the decline of the workstation as a separate market segment:

Place in the market 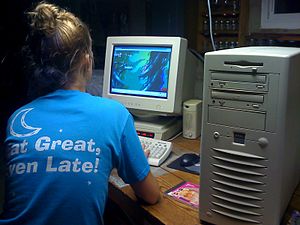 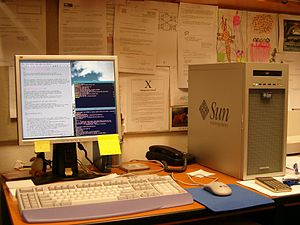 Since the turn of the millennium, the definition of "workstation" has blurred to some extent. Many of the components used in lower-end "workstations" are now the same as those used in the consumer market, and the price differential between the lower end workstation and consumer PCs can be narrower than it once was (and in certain cases in the high-end consumer market, such as the "enthusiast" game market, it can be difficult to tell what qualifies as a "desktop PC" and a "workstation"). In another instance, the Nvidia GeForce 256 graphics card spawned the Quadro, which had the same GPU but different driver support and certifications tailored to the unique requirements of CAD applications and retailed for a much higher price, so many took to using the GeForce as a "poor-man's" workstation card since the hardware was largely as capable plus it could be soft-modded to unlock features nominally exclusive to the Quadro.[1]

Workstations have typically been the drivers of advancements in CPU technology. Although both the consumer desktop and the workstation benefit from CPUs designed around the multicore concept (essentially, multiple processors on a die, the application of which IBM's POWER4 was a pioneer), modern workstations typically use multiple multicore CPUs, error correcting memory and much larger on-die caches than those found on "consumer-level" CPUs. Such power and reliability are not normally required on a general desktop computer. IBM's POWER-based processor boards and the workstation-level Intel-based Xeon processor boards, for example, have multiple CPUs, more on-die cache and ECC memory, which are features more suited to demanding content-creation, engineering and scientific work than to general desktop computing.

Some workstations are designed for use with only one specific application such as AutoCAD, Avid Xpress Studio HD, 3D Studio Max, etc. To ensure compatibility with the software, purchasers usually ask for a certificate from the software vendor. The certification process makes the workstation's price jump several notches but for professional purposes, reliability is more important than the initial purchase cost. 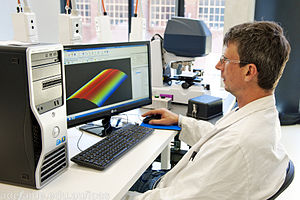 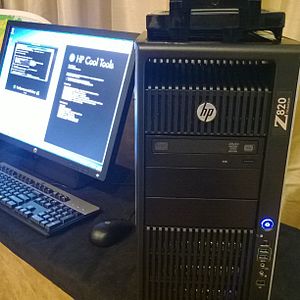 As of January 2009, all RISC-based workstation product lines have been discontinued:

Three types of products are marketed under the workstation umbrella:

A significant segment of the desktop market are computers expected to perform as workstations, but using PC operating systems and components. Component manufacturers will often segment their product line, and market premium components which are functionally similar to the cheaper "consumer" models but feature a higher level of robustness and/or performance.

A workstation class PC may have some of the following features: