The World Amateur Boxing Championships is a biennial amateur boxing competition organised by the International Boxing Association (AIBA), which is the sport governing body. Alongside the Olympic boxing programme, it is the highest level of competition for the sport. The championships was first held in 1974 Havana, Cuba as a men's only event and the first women's championships was held over 25 years later in 2001. The men's and women's competitions are held separately and since 2006 the biennial championships have been held in alternating years. 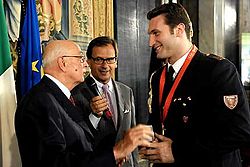 Italian Roberto Cammarelle won the World Amateur Boxing Championships in 2007 and 2009 as a super heavyweight.