The World Federation of Democratic Youth (WFDY) is an international youth organization, recognized by the United Nations as an international youth non-governmental organization. WFDY describes itself as an "anti-imperialist, left-wing"[1] organisation. It was founded in London in 1945 as a broad international youth movement, organized in the context of the end of the Second World War with the aim of uniting youth from the Allied powers behind an anti-fascist platform that was broadly pro-peace, anti-nuclear war, expressing friendship between youth of the capitalist and socialist or so-called Eastern Bloc countries. The WFDY Headquarters are in Budapest, Hungary. The main event of WFDY is the World Festival of Youth and Students. The last festival was successfully held in Quito, Ecuador, in December 2013. It was one of the first organizations granted general consultative status with the United Nations Economic and Social Council.

On November 10, 1945, the World Youth Conference, organized in London, founded the World Federation of Democratic Youth. This historic Conference was convened at the initiative of the World Youth Council which was formed during the Second World War to encourage the fight against fascism by the youth of the allied countries. The Conference brought together, for the first time in the history of the international youth movement, representatives of more than 30 million young people of diverse different political ideologies and religious beliefs from 63 nations. It adopted a pledge for peace.

Shortly after, with the onset of the Cold War and Winston Churchill's Iron Curtain speech, the organization was accused by the US State Department of being a "Moscow front." Many of the founding organizations quit, leaving mainly youth from socialist countries, national liberation movements, and communist youth.[2] Like the International Union of Students (IUS) and other pro-Soviet organizations, the WFDY became a target and victim of CIA espionage as well as part of active measures conducted by the Soviet state security.[3][4][5][6]

The WFYD's first General Secretary, Alexander Shelepin was a former leader of the Young Communist International which had been dissolved in 1943. Shelepin had been a guerilla fighter during World War Two (after his work with WFDY he was appointed head Soviet State Security).[3] Both the WFDY and IUS vocally criticized the Marshall Plan, supported the Czechoslovak coup d'état of 1948 and the new People's Democracies in Europe. They opposed the Korean War.[3]

The main event of the WFDY became the World Festival of Youth and Students, a massive political and cultural celebration for peace and friendship between the youth of the world. Most, but not all, of the early festivals were held in socialist countries in Europe. During the 1960s, 1970s, and 1980s the WFDY's festivals were one of the few places where young people from the so-called "Free World" could meet youth struggling against Apartheid from South Africa, or militant youth from Vietnam, Palestinian, Cuba and other countries. Famous people who participated in festivals included Angela Davis, Yuri Gagarin, Yasser Arafat, Fidel Castro, Ruth First, and Jan Myrdal.

When the USSR and the Eastern Bloc collapsed, WFDY entered a crisis. With the power vacuum left by the collapse of the most important member organization, the Soviet Komsomol, there were conflicting views of the future character of the organization. Some wanted a more apolitical structure, whereas others were more inclined to an openly leftist federation. The WFDY, however, survived this crisis, and is today an active international youth organization that holds regular activities. 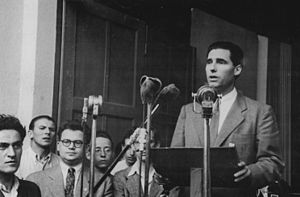 Guy de Boisson, President of the World Federation of Democratic Youth, speaks at the opening of the 2nd World Festival of Youth and Students (Budapest, 1949).

We pledge that we shall remember this unity, forged in this month, November 1945

Not only today, not only this week, this year, but always Until we have built the world we have dreamed of and fought for We pledge ourselves to build the unity of youth of the world All races, all colors, all nationalities, all beliefs To eliminate all traces of fascism from the earth To build a deep and sincere international friendship among the peoples of the world To keep a just lasting peace To eliminate want, frustration and enforced idleness

We have come to confirm the unity of all youth salute our comrades who have died-and pledge our word that skilful hands, keen brains and young enthusiasm shall never more be wasted in war
— Pledge of the World Federation of Democratic Youth

Asia and the Pacific