Worldwide Aeros Corp is an American manufacturer of airships based in Montebello, California. It was founded in 1992 by the current CEO and Chief Engineer, Igor Pasternak, who came to America from Ukraine. It currently employs more than 100 workers.

The company's current products are non-rigids aimed at both the military and commercial markets, including transport, surveillance, broadcasting and advertising. The company's best-selling ship is called the Sky Dragon. [2]

Worldwide Aeros Corp. is also developing what it calls the Aeroscraft, a rigid airship with a number of innovative features, the most important of which is a method of controlling the airship's static lift, which can be reduced by pumping helium from the internal gasbags and storing it under pressure: conversely lift can be increased by reinflating the gasbags using the stored gas.[3] The company has received $60 million from the U.S. Department of Defense to develop the concept,[4] resulting in a prototype named Dragon Dream which underwent systems tests and some tethered flights in late 2013. This prototype was subsequently damaged when part of the roof of the hangar at the former Marine Corps Air Station in Tustin in which it was constructed collapsed on 7 October 2013.[5]

Igor Pasternak founded a design bureau in Ukraine in 1981 at the Lviv Polytechnic University. The private company Aeros was created in 1986 as a result of Soviet reforms and started producing moored balloons. It moved to the USA in 1992.

After the September 11th terrorist attacks, the company shifted its focus from advertising to surveillance, as its large ships can hold 1,000 pounds of radar-surveillance equipment. The blimps have such varied uses as monitoring oil pipelines in Mexico to performing surveillance for the Ukrainian government along the Russian border. [2]

In 2005, Aeros was granted the largest contract under DARPA's project Walrus HULA. Project Walrus was not renewed in 2010.[6] However, the Pentagon continued to fund Aeros through the Rapid Reaction Technology Office, contracting with them in 2010 to build a prototype that could demonstrate key technologies.[7] This prototype became known as the "Pelican."

The Pentagon has provided $50 million in funding for the development of the "Pelican" prototype.[8] 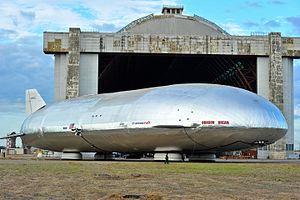 The Aeroscraft is a heavy-lift, variable-buoyancy cargo airship featuring an onboard buoyancy management system, rigid structure, vertical takeoff and landing performance, and operational abilities at low speed, in hover, and from unprepared surfaces. Aeros’ unique and patented COSH technology breakthrough permits airships to efficiently address global cargo/logistics applications for the first time. This new capability will dramatically decrease the time and cost for delivering large ‘project’ and container cargo around the world, especially to austere areas with no pre-positioned infrastructure.

Worldwide Aeros Corp. is also developing what it calls the "Aeroscraft", a rigid airship with a number of innovative features, the most important of which is a method of controlling the airship's static lift, which can be reduced by pumping helium from the internal gasbags and storing it under pressure: conversely lift can be increased by reinflating the gasbags using the stored gas.[10]

This prototype was subsequently damaged when part of the roof of the hangar at the former Marine Corps Air Station in Tustin in which it was constructed collapsed on 7 October 2013.[11]

Project Pelican was a US Government-funded project to build and test a half-scale prototype of the proposed full-size Aeroscraft, using representative structure and avionics.[12] Named Dragon Dream and having a length of 266 feet (81 m) and design speed of 60 knots (110 km/h), it does not carry a payload.[13] The company received $60 million from the U.S. Department of Defense to develop the concept,[14] resulting in a prototype named Dragon Dream which underwent systems tests and some tethered flights in late 2013. The flight of the 'Dragon Dream. With funding from the U.S. Department of Defense, the first floating took place on January 3, 2013 at Tustin, California, where it hovered indoors at a height of 12 feet for several minutes.[15] The Pentagon has declared that the tests of the Pelican were a "success", with the craft meeting its demonstration objectives.[16] The Pelican was rolled out of its hangar on July 4, 2013.[17][18] The company sued the Navy for $65 million in 2015 after the hangar structure fell on the aircraft.[19]

Aeros is currently seeking $3 billion to fund the construction of 24 Aeroscraft vehicles, including the 250-ton capacity ML868 model.[21] The CEO has stated that he aims to have a global fleet operating by 2023. [2]

One obstacle that conventional and hybrid airships face are their inability to control buoyancy without venting helium. Another operational challenge faced by airships and hybrid airships is the inability to control or adjust static lift during operations. Traditional airships' requirement for external ballast exchange and existing ground infrastructure has significantly limited their cargo utility. Once the cargo is off-loaded, traditional helium-dependent airships become extremely light, and this static lift causes them to float away. To combat these forces, they require external ballast exchange, using rocks, ice, water, or lead bags, to keep the airship anchored to the ground.

Because the Aeroscraft is equipped with VTOL capability, it can deliver cargo directly from point-of-origin to point-of-need. Furthermore, other hybrid airships are runway dependent at higher operating weights, but the Aeroscraft does not need a runway, even at full payload. Because of its COSH technology, its computer-controlled virtually-automated directional thrust and station-keeping technology facilitates off and on-loading stores while in hover.[22]

The cargo bay is located at the bottom of the aircraft cavity and is loaded by using a pulley system to load the cargo from the ground. At 1.8 million cubic feet, the cargo bay of the largest Aeroscraft design is much larger than that of any existing commercial freight aircraft (including the Boeing 747-8F and the Antonov 124 aircraft).[22]

The Aeroscraft is a Rigid airship, having an internal structure to maintain its shape. As such it can reach otherwise difficult or inaccessible locations and can hover indefinitely at zero airspeed and with a full payload on board.[23] The design incorporates cargo bays that are larger than any current air, truck or rail transport, while the payload capacity is significantly more than the current 16-ton maximum for helicopters.[13][24]

Propulsion is provided by conventional propellers, and in addition the Aeroscraft design has six downward-pointing Turbofan jet engines that assist in Vertical take-off and landing.[25] These turbofans, together with the Aeros "COSH" buoyancy control system, make the Aeroscraft capable of taking off and landing vertically without the need for a Runway, a ground crew, or external Ballast.[26]

Like any airship, the Aeroscraft may be used to transport cargo to remote or difficult locations and to hover over uneven terrain, in both civil and military use.[12][27] Its operational independence from runways, ground crews or other infrastructure makes it especially suited to military and emergency relief operations. The large cargo bays would allow Outsize cargo such as wind turbines or large aerospace parts to be stored internally.

The manufacturer also envisions the delivery of large amounts of commercial merchandise from a centralized location.[28]

Aeros has developed a technology to avoid the need for ballast, which they call "Control of Static Heaviness (COSH)". The main gas bag is inflated with helium to create lift for takeoff, then on landing some of the gas is re-compressed into a storage tank to partially deflate the gas bag and reduce lift.[23][25][29]

The COSH system also avoids the need to re-ballast when taking on or dropping off payload, and consequently also the associated ground crew.

Worldwide Aeros was awarded a patent of their control of static heaviness system (COSH) internal buoyancy management system in May 2015. The COSH system internally ballasts the non-flammable helium into the aircraft’s helium pressure envelopes (HPEs), helping the vehicle manage buoyant lift. The HPE units contain and control the compressed helium and allow the overall helium volume envelope to be reduced or increased, enabling the air vehicle to become heavy or buoyant in a controlled manner. The compression of helium into the HPE’s creates a negative pressure within the Aeroscraft Aeroshell, permitting air-expansion chambers to fill with readily-available environmental ballast (air), which acts in concert with reduced Helium static lift to make the Aeroscraft heavier, when desired to compensate for adjustments in payload.[30]

The Aeroscraft’s cargo system provides the aircraft with unmatched volume and flexibility when deploying cargo to virtually any point on the planet, empowering the aircraft to pick-up and off-load cargo in more efficient ways, even from hover. The internal cargo handling system has been designed to facilitate cargo loading, sorting, and unloading in a more innovative and efficient manner, overcoming pre-deployment requirements for ground handling cargo equipment in austere environments. The system affixes containers and cargo pallets to rails in the fuselage ceiling, rather than on the floor; adjusts cargo positioning to accommodate changes in center of gravity, such as when other cargo is loaded and unloaded; facilitates access to any piece of cargo at any time, eliminating unneeded cargo movements and reducing ground time; and eliminates labor costs with traditional cargo handling and weight-and-balance requirements.[30]

The Aeroscraft is the only rigid structure variable buoyancy air vehicle of its kind.

Its rigid structure is made from ultra-light aluminium and carbon fiber materials. It consists of transverse bulkheads which are connected to longitudinal members. It is reinforced with high strength composite tensioned cables.

This rigid structure provides an excellent range of hard points for mounting engines, canards, cockpit, propulsion systems, and other auxiliary systems both inside and outside of the hull.[30]

Replacing the more familiar landing gear found on airplanes, the Aeroscraft is equipped with landing cushions that aid the vehicles unique functionality. They aid landing on unimproved surfaces, even water, and perform like a hovercraft during taxi by pushing air through them. In addition, the landing cushions are equipped with very powerful gripping/suction capabilities that ensure the vehicle stays grounded and in place when not in flight. This reversible airflow helps hold the vehicle to the ground, even when the Aeroscraft arrives at destination for cargo offloading, allowing it to operate in heavier wind conditions.[30]

The Aeroscraft is equipped with vectored thrust engines that rotate and allow maneuverability. In addition to aiding helicopter-like vertical take-off and landing capability, the vectored thrust propels the vehicle in forward flight and aids the vehicle with ground-based taxiing.[30]

When in forward flight, the Aeroscraft is controlled by the aerodynamic control surfaces (vertical stabilizers, empennages and canards); however, the low speed control system aids the pilot in lower wind conditions such as during VTOL and hover. The LSC system acts as a rear thruster to propel the vehicle in forward flight, and permits the thrust to be redirected while in hover to help the vehicle maintain desired positioning and orientation.[30]

40B Sky Dragon: Aeros developed the ’40B Sky Dragon’ equipped with a fly-by-wire system, and received FAA type certification

Aeroscraft: Aeros’ successful technology demonstration vehicle for the 66-ton Aeroscraft, nicknamed ‘Dragon Dream’ takes flight. Called RAVB as part of its development under ‘Project Pelican for the Department of Defense

NADATS is a division of Worldwide Aeros Corp which serves operators with elevated early warning systems, tactical ISR solutions and custom, mission-specific equipment for actionable intelligence in hostile environments, for border and coast guard, for facility and event security, and for related missions.[32]

The Sky Dragon is a series of airship that have been used anywhere from military, surveillance and commercial use. The first Sky Dragon 40A was completed in 1999. Following the 40A, the 40B was delivered to Germany in 1997. In 2007, Aeros Corp delveoped the 40D recognized as the worldwide ‘system of choice’, which received a FAA type certification. The 40D was later delivered to Mexico in 2014.[9] [34]

Aeros’ contemporary 40E ‘Sky Dragon’ airship has a useful payload greater than one ton, range exceeding 500 km, 24-hour mission duration, and can observe up to 70,000 square kilometers at a time.